A conversation with Joanna BERZOWSKA and Hal MYERS 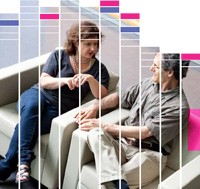 Ever since her return to Concordia in 2002, Joanna Berzowska has been fashioning the future through a series of startling wearable creations that blur the borders of technology, art and design.

Working at the fibre level and integrating space-age materials such as nitinol, Berzowska’s colour- and shape-shifting garments feature fugitive hemlines and disappearing patterns. Some generate power from the wearer’s movements, others respond to voice and touch. They hint at a time when interactive clothing will be routine in our lives, reacting to our behaviour and environment … or even taking on a life of its own.

Berzowska’s skorpion dresses, for example, shown at the Vancouver Winter olympics, move independently of their wearer, like an elegant parasite that inhabits the body of the host.

Beyond the Headlines: Creating intelligent textiles.mp3
Download the podcast (32.7 MB)

When she founded XS Labs (Extra Soft Design Research Studio) in 2003, Berzowska’s initial desire was to develop soft electronics by embedding components in traditional textile practices. Prior to coming to Concordia, she had been developing prototypes for companies such as Nike, including a sneaker that generates power and changes colour with the runner’s speed.

More recently, Berzowska has been collaborating with colleagues and students through XS Labs and Hexagram, the latter a partnership with Université du Québec à Montréal, to produce works in the cultural sphere, including interactive clothing for performers.

You won’t find Berzowska’s creations at Holt Renfrew — yet. However, her research has enough supporters to attract funds from a who’s who of granting agencies, including the Canada Council for the Arts, Social Sciences and Humanities Research Council of Canada, Canada Foundation for Innovation, Canadian Heritage, Fonds québécois de la recherche sur la société et la culture, and Natural Sciences and Engineering Research Council of Canada.

The art and techno geek

A self-professed geek, Berzowska began her first degree at McGill at age 16, in Pure Mathematics, almost simultaneously with a Design Arts degree at Concordia. Following graduate school at MIT, she co-founded International Fashion Machines in Boston, where she provided consulting services with clients such as Herman Miller and DARPA.

She has taught in India, Europe, Japan and Australia, and her work has been exhibited widely, including at the prestigious Cooper-Hewitt, National Design Museum, Smithsonian Institution in New York and the Victoria and Albert Museum in London. She has published in arts and technology journals and lectures internationally about the field of electronic textiles and related social, cultural, esthetic and political issues.

Art commerce, research and ethics converged during a lively exchange at Concordia between Joanna Berzowska and Hal Myers, whose Montreal-based company, Thought Technology, makes biofeedback and neurofeedback devices used around the globe by clinicians, psychologists and high-performance athletes (the Vancouver Canucks, AC Milan and Skate Canada are customers).

In a sense, they both make wearable soft computers — although to achieve different ends.

Their conversation ranged across topics such as the use and misuse of sensors that collect personal medical data, battlefield clothing that performs triage when a soldier has been shot, programming materiality, and manufacturing at molecular levels.

Berzowska’s early frustration with the so-called “cyborg” approach to wearable technology sparked her initial desire to explore a wider range of materials and a broader definition of wearable computing.

BERZOWSKA: My original point of entry into electronic textiles was through the field of HCI, which is human computer interaction. I remember 15 years ago, when I was at MIT, talking to pioneers such as Steve Mann, now a professor at the University of Toronto, and he would come into my office and say “look at my wearable computer.”

MYERS: He was wearing our equipment, that’s our FlexComp system.

BERZOWSKA: Oh I didn’t know that, that’s wonderful! So my initial reaction was, how can you call that wearable? Because there were these huge hard containers strapped to his body … So my point of entry into electronic textiles was actually trying to make these things more wearable by making them softer, helping them conform to the human body … the same way a silk shirt is wearable.

MYERS: We’re actually in the process of developing a sophisticated miniature data acquisition system … approximately the size of an iPhone.

No place for luddites

As expected from a couple of avid researchers, Berzowska and Myers take a benign view of technology.

The future is wear to be

Barely skirting the outer fringes of science fiction, Myers invokes a future he glimpsed at a U.S. think tank in which a robot with morphing skin could be instantly transformed into a golf buddy … say, Tiger Woods.

“Perhaps,” counters Berzowska, “you’ll walk into Ogilvy and download software into your dress.”

Shape, pattern and colour will be only so many variables in a future less anchored to the physical world.

While the two visionaries share an abiding passion for research and technology, Berzowska says her impact in the classroom may actually be her greatest contribution.

BERZOWSKA: The way I help contribute to new product development is really through my students, through pedagogy. A lot of my students who worked in my lab and who studied with me have now started really exciting companies. I’m quite happy just passing on the knowledge and inspiring students.

MYERS: We actually have one of your students working for us right now … an industrial designer. Very creative … a really interesting guy.

An associate professor of Design and Computation Arts in the Fine Arts Faculty, Berzowska has been profiled by publications such as enRoute, L’actualité, I.D., the Boston Globe, and the Globe and Mail and featured in Maclean’s as one of 39 Canadians Who Make the World a Better Place to Live In.

Hal Myers is the co-founder and president of Montreal-based Thought Technology, the world’s leading producer of biofeedback hardware and software, which are used in health care, highperformance sports training, mental health and ergonomics. Some of the more intriguing uses of his company’s products include helping stroke victims and people diagnosed with attention deficit hyperactivity disorder. Hal Myers is an electrical engineer with a PhD in Experimental Medicine from McGill. His initial research focused on the use of biofeedback to control pain.

My hope is that technologies from the past, present and future can coexist and, in fact, help to create a more complex and richer world.