The will to intervene

A conversation with Frank CHALK and Chris YOUNG 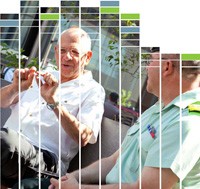 One of the world’s foremost experts on genocide, History professor Frank Chalk is a researcher whose impact on classrooms and seminars is equal to his impact on international courtrooms and national governments.

Chalk has devoted decades to furthering our understanding of why some groups begin by stigmatizing others according to their ethnicity, religion, race or other perceived differences, and end by attempting to erase them from history.

While the Holocaust may have been the most painstakingly engineered genocide in Western history, maintains Chalk, similar events, each one a blot on human history, have been erupting since biblical times — and doubtless earlier.

Beyond the Headlines: The will to intervene.mp3
Download the podcast (37 MB)

When Chalk began studying the morphology of genocide in the 1970s, alongside retired Concordia professor Kurt Jonassohn, the field was surprisingly undeveloped. Together, they staked out the boundaries of a new discipline and published their seminal History and Sociology of Genocide. They subsequently founded the Montreal Institute for Genocide and Human Rights Studies at Concordia, where Chalk serves as director and Sen. and LtGen Roméo Dallaire (retired), is the Senior Fellow.

Understanding evil is only part of the equation. Equally important is learning how to stop genocides and how to minimize the chances of new mass atrocities. This is where Chalk’s research has had the biggest impact. He has presented his findings at the United Nations and before the prosecution staff of the International Criminal Tribunal on the former Yugoslavia and Rwanda at The Hague. Most recently, he co-authored Mobilizing the Will to Intervene, first a policy report and now a text book that presents concrete recommendations for the governments of the United States and Canada. Two of its recommendations were adopted by the Obama administration.

One of the key insights in The Will to Intervene is that, when trying to mobilize governments and citizens to prevent genocide, moral suasion isn’t enough. People respond best to self-interest.

According to Chalk, leaders need a wake-up call — they must understand that mass atrocities halfway around the world have the capacity to unleash a torrent of consequences in their own countries, including pandemics, influxes of refugees, economic repercussions and long-term political instability. Preventing genocide isn’t just the right thing to do. It’s also the smart and prudent thing to do.

A conversation between professor Frank Chalk and Major Chris Young at times excavated the heart of human darkness, and ultimately concluded that genocide and other mass atrocities can be averted, given strong leadership and an interest-based will to act.

A worthy complement and reality check to Chalk’s scholarly research and links with high-level decision-makers, Major Young brought his own growing scholarship to bear on the issues, as well as his experience in Afghanistan and Bosnia, the crucible from which emerged the term — if not the age-old practice — of ethnic cleansing.

The ends of history

The question of whether humanity can learn from its troubled past is critical for scholars such as Chalk and Young. It goes to the very heart of what they do, and asks why they do it.

In a revealing exchange, Young describes the stark differences he observed between his first and second tours of duty while serving with the United Nations in Bosnia. Although the U.S. military is reluctant to mention it, Young says, operational lessons the United Nations learned in Bosnia were invaluable in Afghanistan and Iraq.

It seems recent history, at least, can teach us something.

Knowing what to do after the fighting ends is the tough part, says Chalk. It might be possible to temporarily stop the killing — but then what? How do you build a shared national narrative that doesn’t dwell on perceived past grievances, on settling old scores?

CHALK: … this means working with anthropologists, sociologists, political scientists, geographers, historians, even people in the natural and physical sciences, about building a consensus in different societies, in different cultures. One of the historian’s jobs is to help build a shared narrative, a workable, fact-based history — not necessarily one they all agree on, but common ground that embodies their narratives and eliminates a lot of the myths … So the purely ideological stuff is pushed to the side.

Later in the conversation, Chalk adds nuance to his recommendations. While outside experts are useful, he says, a partnership with the right local people is essential: “They know a lot more than we do about their history, culture and outlook; we have to assimilate their perspectives. But they also need us to help them find the way to the future because they carry so much baggage. We carry our own baggage … but it’s different baggage.”

On the subject of the baggage that leaders and soldiers bring to the field, Chalk and Young deplore the frequent lack of sensitivity when dealing with local populations.

They reflect on an incident involving the U.S. military and the humiliation of Afghani villagers that was widely reported in the press, and Young offers his own views on the importance of the cultural training the Canadian Forces provide to soldiers before they are sent into action.

Far from the killing fields

A graduate of the battlefield and command centre, Major Young is currently pursuing his own scholarly research. “My interest in this subject came from two tours in Bosnia in ’93 and ’96, serving with the United Nations,” he says. “I got very interested in the atrocities taking place, why they were taking place, some of the supposed age-old hatreds that were manifesting themselves … ”

These interests have more recently led Young to investigate ways of measuring mission success — as distinct from the more lofty concept of victory. Specifically, how to link military intervention to diplomacy and development in efforts to achieve faster and more enduring results.

YOUNG: [This ties] directly into MIG’s Will to Intervene project, because that’s one of the fundamental precepts … this whole idea of linking all three lines of operations and coming up with a coherent package that’s able to move into the country, operate in that country, prevent atrocities, stop the genocide if it’s in the making and then withdraw, leaving it a safe and secure environment.

Frank Chalk obtained his PhD in History from the University of Wisconsin, has been a Fulbright Professor in Nigeria and a Fellow of the Centre for Advanced Holocaust Studies in Washington. The author of many articles, books and book chapters, Chalk has been profiled and cited in the academic and popular press for his pioneering research into genocide studies. He has served as president of the International Association of Genocide Scholars and is a past president of the Canadian Association of African Studies.

Chalk is currently researching how demagogues use radio broadcasting to incite fear, hate and intolerance in troubled regions of the world, as a prelude to genocide.

Major Chris Young has an MA in Strategic Studies from the Royal Military College of Canada and served tours of duty in Croatia and Bosnia during the 1990s as a factions and contingent operations officer. He has also served in Afghanistan and spent five years as a Canadian Forces liaison officer in Fort Knox, Kentucky, monitoring United States Army developments in armour. Chris Young has been decorated by the United States Army, NATO, the United Nations and the Canadian Forces, and is currently a PhD student at Concordia, working on conflict studies and international relations.

I think leadership is key. A wise leader will understand that it’ s important to consider The long-term interests of his or her country. And that serving those interests depends on preventing mass atrocities.