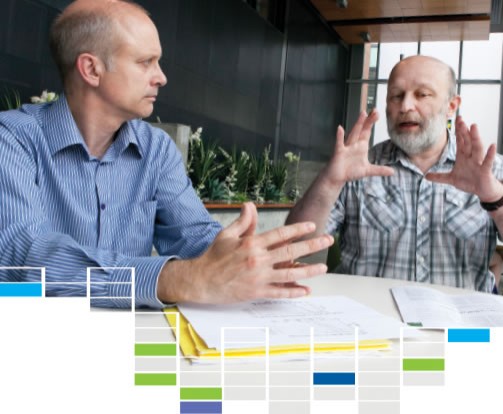 Vladimir Titorenko is unlocking the secrets of aging buried deep within our genetic code. However, instead of the fountain of youth, his research uncovered something unexpected — a chemical that stops cancer in its tracks.

His experiments demonstrated that lithocholic acid, a chemical produced by the liver, effectively kills cancer cells while prolonging the life of healthy cells. The potential benefit of such a focused effect is extraordinary, since most current cancer treatments make no distinction between healthy and unhealthy cells, destroying both indiscriminately.

The Concordia biology professor made the discovery while experimenting with a variety of natural chemicals to determine which, if any, could interrupt the aging process at the genetic level.

“For a very long time aging was considered something that just happened with time,“ he explains. “But it appears that actually there is a very limited number of genes responsible for defining how long any individual will live.”

Titorenko conducted his experiments with yeast, an organism genetically similar to human beings, with a lifespan of only a few weeks. The accelerated maturation time for yeast means genetic responses to chemicals can be observed in days, instead of years.

By evaluating the effects of exposure to different chemicals, he was able to identify a few that interfered with how quickly yeast aged. Among the chemicals was lithocholic acid, which effectively extended its life.

Since cancer is a disease associated with aging, Titorenko took the experiment further, exposing human cells, and then human cancer cells to lithocholic acid, with positive results. His next step is to steward this potential new treatment through the long process from the Petri dish to the doctor’s office.

Meanwhile, he can also conduct further tests using some of the other chemicals that showed potential in slowing the aging process in yeast.

Beyond the Headlines: Unexpected discovery could halt cancer.mp3
Download the podcast (20.5 MB)

Vladimir Titorenko did not set out to find a cancer-blocking compound when researching the genes associated with aging. But, now that he has identified a promising chemical that could be used in the fight against cancer, he would like to get his laboratory results into the real world.

The treatment must be proven to be effective and safe. To this end, he has established ties with Thomas Sanderson, a toxicologist whose lab looks at the impact of pesticides and other chemicals on the endocrine system.

Sanderson has followed Titorenko’s work closely. He recently hired one of Titorenko’s former students as a postgraduate researcher in his own lab. Along with researchers at McGill University and the University of Saskatchewan, they are conducting additional tests on the compound. The researchers are interested in how the potential treatment might perform in combination with other compounds and using different delivery methods.

TITORENKO: We were looking specifically for a chemical compound, out of this collection of thousands and thousands of different compounds, which can greatly increase the longevity of yeast. So that was our primary interest, and we discovered about 20. Six of these were compounds that belonged to the group ‘bile acids.’

Because cancer is considered an age-related disorder, we decided to test whether or not this compound has any anti-cancer effects in cultured human cells recovered from different kinds of cancers.

SANDERSON: Two striking results, I believe Dr. Titorenko found. First of all, that lithocholic acid can kill certain cancer cells, whilst leaving normal cells alone … The second thing that I thought was very interesting is that the lithocholic acid doesn’t actually get into the cell … That means there’s some characteristic on the cell surface that is making them susceptible to lithocholic acid. [Something] not just stopping them from growing, but actually telling them to undergo a programmed cell death.

From experiment to treatment

SANDERSON: What’s plausible is, based on the structure of lithocholic acid, related chemicals can possibly be synthesized that may have even more potency than lithocholic acid, and also reduce potential toxicities.

TITORENKO: Not only that, but perhaps even a certain type of targeted delivery so that the compound will be surrounded by a pill, which will dissolve only in certain parts of the body. This is really complex research, so this is a very important first step.

SANDERSON: As research scientists, we’re generally at the very early stage of this kind of development. To get it all the way to the phase where it’s tested in humans, you’d have to get pharmaceutical companies interested. This is more of a challenge with [natural] compounds like bile acids, which already exist. They can’t really be patented. They can maybe be patented if these bile acids are formulated in a certain way — one that is effective in treating human cancers.

TITORENKO: It’s very important to remember that any compound can be toxic to healthy cells if it exceeds a certain type of dose or concentration. And the same is true about any magic bullet, any anti-cancer, anti-aging compound. They’re toxic if you exceed a certain dose. So it’s very important to figure out how to deliver this compound. Many questions need to be addressed, because, yes, if you exceed a certain critical dose, it can be dangerous, just like aspirin.

SANDERSON: I agree with Vladimir, because I study natural compounds and in fact, yes, they are, they have beneficial effects at lower concentrations, but generally at higher concentrations, some of them can be very toxic.

Currently an associate professor in biology and the Concordia University Research Chair in Genomics, Cell Biology, and Aging, Vladimir Titorenko is studying the role that genes play in the aging process. His research may provide clues to combatting diseases associated with growing older, such as cancer and Alzheimer’s.

Since earning his PhD in genetics in Moscow in 1988, he has spent several decades conducting award-winning research projects in private laboratories across Europe and in Canada.

Titorenko easily transitioned from private labs to academia, joining Concordia’s Department of Chemistry and Biochemistry in 2002. He is currently affiliated with the university’s Centre for Structural and Functional Genomics. He has received multiple grants from the Canadian Institutes of Health Research and the Natural Sciences and Engineering Research Council of Canada. He has also received grants from the Canadian Foundation for Innovation for indispensable research equipment.

His work has been published in scientific journals around the world, and in the mainstream media. In January, Titorenko was named Personality of the Week by La Presse and Radio-Canada.

Currently an associate professor at the Institut national de la recherche scientifique-Institute Armand-Frappier, he has held a variety of positions at academic institutions across Europe and North America.

With funds from the Natural Sciences and Engineering Research Council of Canada he is researching the mechanism by which a wide variety of chemicals interfere with androgen and estrogen biosynthesis in human and animal models. His research has implications for better understanding certain hormone-dependent cancers and the growing incidence of reproductive problems in humans.

You would never guess that working with yeast, you would end up finding a new anti-cancer compound. That's the beauty of science.