Connecting with the community

A conversation with Valerie MILLETTE and Alison STEVENS 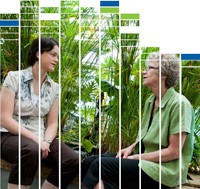 Tucked away on the sixth floor of the downtown Hall Building, Valerie Millette’s modest office appears indistinguishable from dozens of others spread across Concordia’s two campuses. And yet, as the visitor soon realizes, this is the beating heart of a volunteer tradition that reaches back to the very roots of the Concordia community.

Indeed, if we wanted to measure a community’s compassion and engagement with the world, its rate of volunteerism would be a good barometer. And, at Concordia at least, the LIVE Centre would be a good place to start measuring.

Beyond the Headlines: Connecting with the community.mp3
Download the podcast (52.3 MB)

After being “hooked on volunteering somewhere along the way,” Millette parlayed her passion into a master’s degree in Management from the John Molson School of Business (her thesis topic was enhancing volunteer motivation and satisfaction).

Today, as coordinator of the Leadership Initiative and Volunteer Engagement (LIVE) Centre, Millette is conscious of the legacy placed in her care. The first resource of its kind among Quebec universities, the centre brings together volunteer resources and opportunities from across the two campuses, Montreal, and even abroad.

At the other end of the spectrum, faculty and staff can use the centre’s services to connect with students who are eager to contribute.

Before moving to Montreal, Millette’s first volunteer experience was with Meals on Wheels, bringing food and companionship to isolated seniors. Her decision to volunteer, she admits now, was also strategic, both personally and professionally. Like many of today’s students, she wanted “to get experience. To see what I could get out of it.”

Since then, her meteoric rise has seen her take on the roles of volunteer coordinator, recruiter, trainer and member of not-for-profit boards and committees.

Her latest passion, however, has been to volunteer with … seniors, spending time each week providing companionship to the elderly.

During its first year of operation under Valerie Millette’s leadership, Concordia’s LIVE Centre connected with more than 1,200 students. As well, some 600 students benefited from one-on-one coaching, which helped them find and get the most out of volunteer opportunities that matched their skills, interests and goals.

During their summit of minds and passions at Concordia, Valerie Millette and Alison Stevens discussed the challenges and transformative powers of volunteering.

The technologies have evolved, and so have the needs of volunteers, driven by our nation’s changing demographics and corporate involvement. But giving back to the community continues to generate lasting value for individuals and organizations.

Stevens heads up the Volunteer Bureau of Montreal (VBM), which celebrates its 75th anniversary in 2012, while Millette’s LIVE Centre just finished its first year in business.

During one of the early exchanges in the conversation, Stevens remarks that, “It would be great if all universities had a volunteer centre of some kind … because we [at the VBM] don’t specialize in students … we don’t have the in-depth experience or knowledge.”

The pair also reveal that they are as deeply committed to the practice as to the promotion of volunteering.

STEVENS: We have a much larger role of … educating individuals, the general public and organizations about the best way to engage volunteers … to make it a good experience.

MILLETTE: The LIVE Centre also has a role in educating … working with staff who may want to engage volunteers, and trying to [follow] best practices in volunteer management.

Reflecting on Bridging the Gap, a 2010 research study on volunteerism in Canada, Millette and Stevens trade insights on how to better align the organization’s needs with the volunteer’s personal and career goals.

Recalling her own early experience, Millette says most students are “looking to develop skills. This brings a much higher demand for projects based on using these skills … But a majority of volunteer opportunities … may not be skill based.”

Part of her job, she concludes, is getting more organizations to understand what student volunteers are looking for, and to thereby narrow the gap.

Stevens agrees, observing that today, “younger people, or people who are professionals or early retirees, want short-term involvement. They want to see the results of what they do — compared to the traditional volunteer … who is just happy to help out over the long term.”

While the desire to gain experience and skills may be most students’ chief motive for volunteering, Stevens points out that they often get more from the experienced than they expected — often much more. In fact, she suggests, they really should keep an open mind about what volunteering will do for them.

STEVENS: It’s very hard to educate for soft skills, and one of the advantages of volunteering is that you get to work with people … on a team … to practise communication. Those skills are very valuable.

MILLETTE: You talk about soft skills. I talk mostly [to students] about transferable skills, but they’re the same thing. And that’s the education I do with students … thinking through with them what skills they will need to get a job. Even if they will be an IT specialist, work in a pharmaceutical lab or as an engineer, you’ll be working with a team of people.

At one point in the conversation, Stevens describes the profound demographic and cultural shifts that no longer support Canada’s traditional volunteer model. Our aging population, for example, will increase pressure on volunteer agencies. Immigration has also changed how Canada volunteers. While new Canadians do volunteer, they do so for different causes and reasons.

Millette responds with her own experiences at Concordia, which hosts students from dozens of nations.

However, there are impediments. For example, international students face daunting language barriers — in English and French — and need to be carefully directed to the right organizations. They want to become involved but they face additional challenges — lack of experience working in Canada, says Millette.

“We have resources,” she says, “but we need … more organizations that will welcome international students, new immigrants, different generations … so we can better integrate people to face those challenges in the next few years.”

The generation just previous to the baby boom produced a raft of “super volunteers” who famously volunteered vast resources of time, money, skills and energy to the not-for-profit sector. Stevens cautions that these superlative givers aren’t being replaced.

Indeed, she says, “different cultures, different values, different interests” are causing a radical change in volunteering, and it’s up to agencies to adapt to meet future needs.

From a Concordia perspective, Millette is characteristically upbeat: “I see so many students who want to get involved, who are engaged, who are doing things, and if they’re not finding a place where their passion fits, they’re actually creating their own projects.”

“This younger generation,” she concludes, “is far from apathetic.”

A lifelong volunteer who began as a candy striper at a Toronto hospital, Alison Stevens is today the executive director of the Volunteer Bureau of Montreal, the oldest volunteer centre in Canada, which works with about 1,000 organizations.

The environmental, educational, social justice and health issues she championed in her community eventually led Stevens to a master’s degree in Human Systems Intervention at Concordia. She then worked as a consultant in the public and private sectors, before joining the Volunteer Bureau of Montreal. She is currently the chair of Volunteer Canada’s Advisory Council of Volunteer Centres and the vice-president of Canadian Administrators of Volunteer Resources.

Community engagement is intrinsic to the very DNA of Concordia. The live centre may be just a year old, but volunteering has been a core value at Concordia since its founding … so we’ re providing continuity with those values.