A conversation with Adel HANNA and Pierre BRISSET 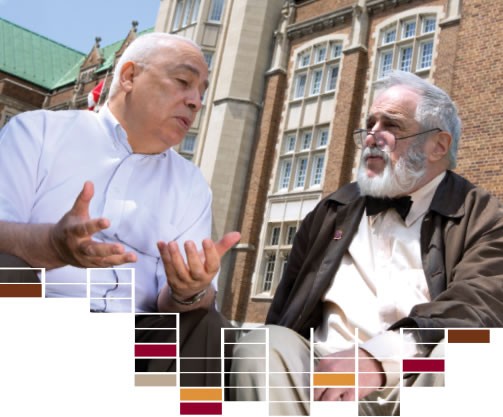 In recent years, devastating infrastructure failures involving collapsing bridges and tunnels have plagued Montreal. There have also been numerous occurrences involving privately owned buildings, all resulting in severe harm to pedestrians or drivers.

Among these incidents are the collapse of the De la Concorde Boulevard overpass and a 25-ton concrete slab that fell from the ceiling of the Viger Tunnel. In addition, concrete and bricks have fallen from a number of private buildings.

“The problem with buildings is not the concrete or steel, it’s with the ground,” says Adel Hanna, a Concordia engineering professor who frequently responds to media calls to provide comments on events and issues related to infrastructure construction, planning and renewal.  “You put the building on the ground; if the ground shifts or dances or moves, it takes the building with it.”

As unoccupied land becomes scarcer, and more expensive, and the city’s infrastructure ages, the need to develop long-term solutions instead of cosmetic fixes becomes increasingly urgent.

“Once the problem is visible, it’s already too late,” he warns. He is calling for a coordinated effort to systematically monitor the health of structures, the way medical checkups monitor an individual’s health, to spot problems before they become too large to easily address.

Beyond the Headlines: Building sustainable cities.mp3
Download the podcast (35.7 MB)

Both structural engineer Adel Hanna and architect Pierre Brisset agree that Montreal can become a more sustainable, liveable city. They propose maintaining and improving existing structures, whenever possible, instead of building new ones.

“Is there a way of salvaging, or altering a structure to prolong its life? When you break a leg, you put a cast around the leg, you don’t just amputate,” argues Brisset. “Rather than going to major amputations, perhaps we can do a few operations to prolong its life.”

They would like to see a coordinated plan that considers the long-term needs of the city.

Better coordination would ensure the long-term viability of, and accountability for, the city’s infrastructure. Currently, problems are addressed piecemeal, and remedies are often inconsistently applied.

Hanna stresses that forecasting a structure’s longevity requires ongoing evaluation. The infrastructure connecting Montreal to the South Shore must accommodate far more traffic than when it was constructed. “For a structure that’s 50 or 100 years old, we can predict natural deterioration, due to the weather and wear on materials … we know that part. But could we have predicted how popular the South Shore would become?”

Was Montreal built to last?

HANNA: All of our buildings are getting old, and we do just a little bit of maintenance and inspections. With age, things change.

Whereas on the south side, the Ville-Marie, and the Turcot Yards, and Ville St-Pierre, that whole collection of structural overpasses, which were built in the 1960s, now they want to replace them all.

HANNA: If a structure is no longer suitable to sustain increased traffic, then it’s time to change it. Other than that, maintenance is needed — regular maintenance, proper inspections by qualified engineers, not just by maintenance technicians. And that will lead us to sustainable structures.

Building with the environment

HANNA: Downtown we have rock at 40 feet, that’s why we built our engineering building (Engineering, Computer Science and Visual Arts Complex) and the John Molson Building (John Molson School of Business) with three levels of basement. The foundation, right on the rock, generated three levels of space for the two buildings, and that was great.

BRISSET: Well, sustainable architecture is what you work with. Basically it’s to be able to understand the conditions you’re working with … For example, it’s understood, one of the criticisms we have of the Turcot Yards is that the location where they want to put the new highway and the new rail line is over an old river bed, which has a very weak bearing capacity.

Our argument is why invest so much money in putting an infrastructure in an area which doesn’t have the soil-bearing capacity, and which would cost a great amount of money to try and stabilize? Can we afford it?

Repurpose instead of rebuilding

BRISSET: We have been spoiled in the past, building a lot of things —  building highways, building networks, building metros, this, that, and the other thing. But in today’s society, we don’t have the means to rebuild all of this.

… It just costs too much. I mean, who’s going to pay for it? To rebuild the structure usually costs five times as much as to build the original structure because you have to maintain the existing structural operation while you rebuild, and it’s very complicated.

HANNA: Fifty years ago we had the luxury of choosing whether a building could be here, or here. Now we are very limited by available land ... We have to really maintain our existing buildings, and [when we do build] we have to build for 100 years ahead.

… If we study the last 100 years, we should be able to forecast the following 100 years. That’s the way we do it. We don’t have another technique except to study the past to prepare for the future.

Adel Hanna left his home in Egypt for Canada after completing his master’s degree at Cairo University. He joined Concordia University’s Faculty of Engineering and Computer Science in 1978 – the same year he earned his PhD from the Technical University of Nova Scotia.

He never lost his childhood fascination with building blocks and by the time he reached high school, he had decided on a career as a structural engineer. His primary interest is geotechnical engineering — understanding how soil conditions below ground impact construction challenges above ground.

This unique expertise within Concordia’s Department of Building, Civil and Environmental Engineering has led him to develop several courses on the subject and has attracted more than 100 graduate students to work with him.

A Fellow of the American Society of Civil Engineering, Hanna has often served as a private consultant. He has contributed to manuals on foundation design across North America while also publishing more than 150 academic papers.

Pierre Brisset is an architect who has become interested in urban transportation issues.

Since 1975, when he became a member of the Quebec Order of Architects, he has been involved in numerous projects in Montreal, including the Dawson College expansion project and modifications to the Salle Wilfrid-Pelletier in Place des Arts. Recently, his work restoring the Old Brewery Mission was recognized by both Design Montreal and Heritage Montreal.

He is one of the founding members of the Groupe de Recherche Urbaine Hochelaga-Maisonneuve, developing alternative transportation strategies for Montreal’s east end, such as light rail transit. His work with Concordia Associate Professor Pierre Gauthier on revisioning a solution for the Turcot Interchange was published in 2008 in Montreal at the Crossroads.

What we really need is two things: regular inspections by structural engineers for all our buildings and regular
maintenance.