‘You have to keep sounding the alarm’

Through social-justice activism, storytelling, arts and culture curation, and efforts on behalf of Inuit self-determination, Indigenous alumnae of Concordia are drawing on their heritage to lead — and inspire — by example.

Meet four women making a difference in their own communities and society at large. 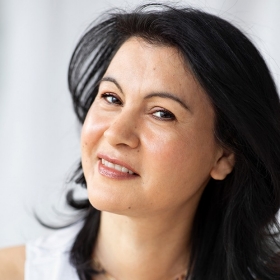 “Present yourself as fearless, even when you’re scared. But surround yourself with good people who believe in you and support you.” | Photo: Marie-Claude Fournier

Nakuset, BA 00, fights hard so Montreal’s Indigenous population can access critical services. The Concordia graduate was adopted during the Sixties Scoop — when Canadian child-welfare authorities were empowered to arbitrarily remove Indigenous children from their families and place them in foster homes for subsequent adoption by white people.

Nakuset, who is Cree from Lac La Ronge, Treaty 6 territory, Saskatchewan, was placed with a Jewish family in Montreal. As was typical at the time, her Indigenous roots were downplayed and denigrated.

“Most of the adoptions failed,” she says of that era, but she credits a caring adoptive grandmother for giving her strength and love. (One of Nakuset’s early professional projects was to create a cultural manual for white families who adopt Indigenous children, as well as an Indigenous program modelled after Big Brothers Big Sisters.)

While doing support work at the Native Friendship Centre of Montreal three decades ago, Nakuset was appalled by the lack of available resources.

“There were people falling through the cracks — homeless people who were suffering from the effects of residential schools or the Sixties Scoop,” she says. “No one seemed to care.”

Nakuset soon enrolled in Concordia’s Department of Applied Human Sciences to figure out how to create solutions. While a student, she joined the Native Women’s Shelter as a front-line worker and rose to become executive director. She has since developed many projects and programs, from health- and family-care services to advocacy and support-system guidance. Notably, next February Nakuset will open Miyoskamin, a second-stage housing program and social pediatric clinic for women and their children.

But progress is never linear amid the persistent obstacles of systemic racism. In 2018, when homeless shelter Open Door left the Cabot Square area of downtown Montreal, eight Indigenous people died in the subsequent three months.

“They couldn’t get access to services, they were turned away from hospitals, they had nowhere to sleep,” says Nakuset. “I was so outraged — how many Indigenous people have to die before someone does something?”

When the city decided to revitalize the neighbourhood, Nakuset urged officials not to remove people from the park and to provide them with services. Media publicity led to a financial commitment, and she stepped forward to help create the wellness centre Resilience Montreal.

Currently in a temporary location — with a permanent one to be announced soon — the centre has already brought relief and hope to the Indigenous community. Nakuset anticipates handing the reins over to co-founder David Chapman within a few years.

“You have to keep sounding the alarm as injustices happen, and hope that it will inspire others to do better,” Nakuset says of her approach to fighting for positive change. “Present yourself as fearless, even when you’re scared. But always surround yourself with good people who believe in you and support you.” 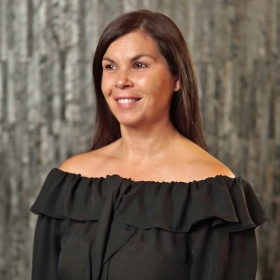 “The stories we tell are sacred. They’re generational, they’re ancestral, they harness a lot of culture and Indigenous knowledge and identity, which is a huge responsibility.”

Regan Jacobs, BA 00, spends much of her time travelling throughout the Mohawk Nation territory that straddles the St. Lawrence River in Quebec, Ontario and the state of New York in an attempt to tell people’s stories.

When she worked for a traditional media outlet fresh out of Concordia’s Department of Journalism, Jacobs was often asked to cover First Nations communities because she was Mohawk. Wanting to tell their stories in her own way, she started her own company, Loud Spirit Productions, in Kahnawake, a Mohawk territory south of Montreal.

In 2013, Jacobs was hired to develop an Akwesasne television station as a consultant, then asked to remain as general manager. It was a major transition from independent journalism to running budgets, programming, financing and human resources, all under the purview of a board of directors.

“If you’re going into leadership roles, you’re going to have to know a lot about business and politics,” she says.

At Concordia, Jacobs received “a great foundation for the ethics and principles of journalism, creating content, its legalities and structure.”

Her undergraduate studies were during the analog era — think editing Super 8 reels. Within two years of graduation, Jacobs had to completely retrain in digital technology. Now, she always makes sure that she and her team stay up to date with the latest tools of the trade. Versatility is key to success, she believes.

“It’s really important that you know even the basics of shifting from traditional storytelling into a virtual or online world,” she says. “If you want to be able to make it in this industry, you have to work extremely hard. It’s very detailed — you have to be focused, triple-checking everything.” Though with time, Jacobs learned to work smarter, rather than harder. “The earlier you learn that, the better off you will be.”

“The stories we tell are sacred. They’re generational, they’re ancestral, they harness a lot of culture and Indigenous knowledge and identity, which is a huge responsibility. We approach things from an emotional and logical place.”

Reflecting on her own professional trajectory, Jacobs observes that, “the more you can centre yourself in your career and your perspective and trust yourself, the better you will be at what you do.” 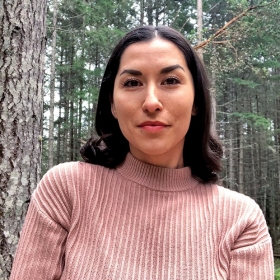 The best advice Camille Usher has received about leadership is to not take conflicts personally, and to look at each situation logically.

Camille Usher, BFA 15, MA 17, is an artist, a long-distance runner, a board member of the Toronto Biennial of Art and the Galiano Literary Festival, as well as a freshly hired assistant professor at OCAD University in Toronto.

Usher, who is Coast Salish, Sahtu Dene and Scottish, previously served as executive director of the Indigenous Curatorial Collective (ICCA), whose purpose is to support and connect Indigenous curators and artists throughout Canada and the world.

After she was hired by the ICC in 2019, Usher set out to determine exactly what the “gangly teen of an organization” had been up to and was capable of.

She soon noted that even she, a well-connected and relatively savvy professional, felt a bit lost in navigating through some of the processes required to stage an exhibition. She imagined artistically inclined Indigenous youth in rural areas with spotty internet trying to do the same. How would they fare?

“The ICC’s job is to make sure Indigenous curators have the tools and resources to create their exhibitions, and feel supported and connected to a larger community,” Usher says. “The organization tries to show the possibilities of many different kinds of curating and how important it is.”

While at Concordia, Usher was inspired by art history professor and Inuk scholar Heather Igloliorte. She worked on a project of Igloriorte’s that saw the first nationally touring exhibition of Labrador Inuit art. “She is a force to be reckoned with,” remarks Usher, a PhD candidate at Queen’s University. She was particularly inspired by Igloliorte’s ability to attract Indigenous art historians and curators to the university.

In her work at the ICCA, Usher fostered a community and made space for her employees to think and create autonomously. “I’m not a micromanager,” she says.

Because the ICCA’s team was already accustomed to working remotely, the pandemic wasn’t too disruptive. But when Usher noticed stress levels rising, she implemented a four-day workweek.

“Our work improved 10 times over after that,” she says. The best advice Usher has received about leadership is to not take conflicts personally, and to look at each situation logically. In the non-profit sector, she adds, you must also be prepared to step into any role and intuit when to delegate.

“I hate doing payroll,” she says, laughing. “I’m really bad at it.” The ICCA saved money when she gave those duties to someone else, leaving her time to fundraise. “The biggest learning curve was figuring out how to find capable people to fill specific roles,” she says.

Proud to have made her mark at the ICC — the organization described her tenure as “successful and inspiring” — Usher’s current focus is on her students at OCAD, where she lectures on art history and curatorial practices. 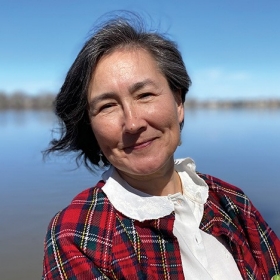 “Being a woman and a leader requires commitment and fortitude. You don’t gain that fortitude alone. You need to surround yourself with good people.”

Lisa Qiluqqi Koperqualuk, BA 08, was recently elected president of the Canadian chapter of the Inuit Circumpolar Council (ICC), which represents more than 180,000 people living in Alaska, Northern Canada, Greenland and Chukotka, Russia. The non-governmental organization’s mission is to advocate for Indigenous peoples of the Arctic and subarctic on the international stage.

“We’ve got our work cut out for us,” admits Koperqualuk, who was born and raised in Nunavik in northern Quebec.

When Koperqualuk served as ICC Canada’s vice-president, she worked for the organization in its aim to become a permanent member of the International Maritime Organization (IMO), a specialized agency of the United Nations responsible for regulating shipping. Melting ice in the Arctic Ocean has yielded new trade routes in international waters. A 2020 report by the Arctic Council, of which Canada is a member, noted that the number of ships entering the Arctic grew by 25 per cent between 2013 and 2019.

Involvement in the IMO “gives us a voice to protect the environment we are so connected to: coastal areas, the marine environment, marine biodiversity, the oceans, the marine mammals — all things we depend on for our culture,” Koperqualuk says.

With the repercussions of climate change on Arctic regions, it is crucial, she adds, that we work to preserve “the expression of our language, the way we feed our families, the way we connect with animals and their migration patterns.”

Koperqualuk believes that to overcome society’s most urgent challenges, Indigenous knowledge must be considered alongside science-driven research. What’s more, scientific research that takes place within Inuit communities needs to be collaborative and of benefit to those communities.

As a political-science major at Concordia, Koperqualuk’s favourite class was on globalization. The course material hit close to home — the father of her children was a pilot for a mining company, and Koperqualuk lived in West Africa for a time as a result.

During her undergraduate studies she read the draft of the United Nations Declaration on the Rights of Indigenous Peoples and followed its lengthy approval process.

“It’s now a document we completely rely on as one of the principal sources of our work at the ICC,” she says. “Everything that’s related to our inherent right to self-determination is all stated in there.”

Towards the end of her Concordia degree, Koperqualuk was offered work as a communications officer for Makivik, an organization centred on the rights and interests of Inuit in Quebec. She also went on to earn a master’s degree in anthropology from Université Laval, and spent two months interviewing 40 elders on the rules that govern Inuit life to produce “Traditions Relating to Inuit Customary Law in Nunavik,” an essay published by the Avataq Cultural Institute in English, French and Inuktitut.

A self-described introvert, Koperqualuk has had to build up her confidence and learn how to network in order to excel at her job.

“Being a woman and a leader requires commitment and fortitude,” she says. “And you don’t gain that fortitude alone. You need to surround yourself with good people.”