In defence of biodiversity

Concordia researchers are focused on the future resilience of our planet’s species
|
By Charlie Fidelman
Source: Concordia University Magazine

“The ash aren’t doing very well,” observes Ziter, a Department of Biology assistant professor, research member of the Quebec Centre for Biodiversity Science and fellow of Concordia’s Loyola Sustainability Research Centre. “When I’m out for a walk, I like to think of how the old trees are like a window into the past, reflecting the choices that have shaped our city.”

Ziter is among a growing number of Concordia researchers helping to enrich biodiversity conservation in urban landscapes and beyond.

Her research on human-dominated landscapes examines how green spaces across the city — parks, trees, backyards, hedges and bits of forest — coalesce to provide a rich biodiverse environment. 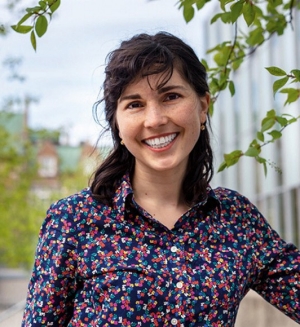 As COVID-19 has recently underscored, green spaces are also crucial for mental health and physical well-being. A recent survey found that Canadians flocked to local parks in greater numbers throughout the pandemic.

“Green spaces can make us happier, healthier and safer in our cities,” Ziter says. “But do we need biodiversity for that?” Consider the ash, she says. It was once planted all over Montreal, replacing rows of elms that graced many streets until the advent of Dutch elm disease.

Then came the emerald ash borer, a beetle native to northeastern Asia that decimated thousands of ash trees in the city. About 3,600 trees in Angrignon Park — which spans 97 hectares in the Sud-Ouest borough — were targeted for removal in 2019 as a result. The year before, 40,000 ash trees on Mount Royal were felled.

Entire streets lost their leafy canopies, Ziter adds: “It’s a reminder of the way biodiversity changes in our cities depending on disturbances that occur. Today, new plantings are more diverse, with the idea of future resilience in mind.” Disturbances both local and global, from habitat loss to pollution and climate change, concern researchers like Ziter affiliated with Concordia’s transdisciplinary Next-Generation Cities Institute.

“We need to see natural elements — trees, parks, waterways — in our cities as critical infrastructure, the same way that we pay attention to roads, bridges and buildings.” Better management of urban green spaces will help birds, insects and migratory species, which will subsequently impact ecosystems beyond a city’s borders, adds Ziter. Efforts to improve urban biodiversity are important but can sometimes be misguided without scientific guidance.

Ziter cites the example of bees, a prominent symbol of biodiversity and conservation that has spurned an urban apiary craze. Gail MacInnis, MSc 12, a postdoctoral fellow in Ziter’s lab who looked at the effects of urban hives, concluded that they did little to help native bees.

“It’s like saying, ‘I’m concerned about the birds and the loss of bird species, so I’m going to get a chicken coop,’” explains Ziter. “You can see that sounds silly when we say it about birds. How will your chicken coop help save bird biodiversity?” An overabundance of honeybees could actually endanger wild bee species.

The domesticated European honeybee is a managed species that competes with native wild pollinators for limited food sources. So what would a constructive strategy to help bees look like? Promoting the growth of wildflowers and trees with pollen would be a good start, asserts Ziter.

The compelling case for biodiversity 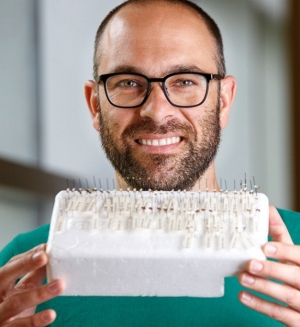 “If plants can’t reproduce, we won’t have food. It’s as simple as that,” says Jean-Philippe Lessard.

Animals that tend to survive and thrive are likely to host potentially dangerous pathogens that can make the jump to humans. The degradation of coastal regions and the transformation of forests, grasslands and deserts into cities, suburbs and agricultural land has caused many species to decline or disappear.

Accelerated encroachment in the last 100 years has fast-tracked habitat destruction, says Jean-Philippe Lessard. The Department of Biology associate professor’s lab investigates biodiversity dating back to glaciation and the formation of continents.

The Intergovernmental Platform on Biodiversity and Ecosystem Services’ 2019 Global Assessment Report estimates that one million animal and plant species are threatened with extinction.

That’s the highest number ever recorded in human history. And the World Wildlife Fund (WWF) adds that such activity — overfishing oceans, clearing forests, polluting water — has significantly altered 75 per cent of land and 66 per cent of ocean environments. Some, however, believe the decline is underestimated.

The WWF Living Planet Database is heavily biased towards species that get more conservation attention, and losses may actually be worse than described in the latest edition of the Living Planet Report. 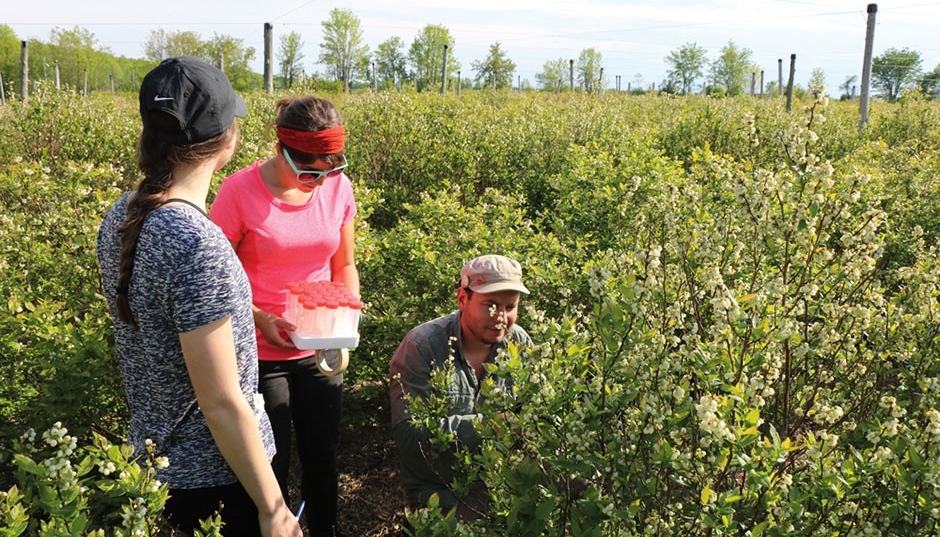 Curiously, the highest rates of human-driven extinction are found in the most biodiverse areas — habitats teeming with a disproportionate number of species — or “what we call biodiversity hotspots,” says Lessard.

More than simply a collection of plants and animals on earth, biodiversity is about local ecosystems and promoting healthy conditions for organisms to thrive.

Lessard refers to the Rivet Hypothesis, coined by Stanford University ecologist Paul Ehrlich, which compares an airplane to an ecosystem. Key species are the rivets that hold the plane’s wings in place. Lose a rivet, lose a species — and the integrity of the whole is in peril. Adds Lessard: “The question then becomes, how many rivets can we afford to lose before the plane crashes?”

The New York Times called the dwindling number of species an apocalypse. Their decline is linked to multiple factors — habitat destruction, deforestation, fragmentation, urbanization, agriculture, herbicide and pesticide use. Although less cute and cuddly, insects and other creepy-crawlers are the most diverse group of animals on the planet, says ant specialist Lessard.

Representing up to 80 per cent of the world’s species, insects are the sole food source for many amphibians, reptiles, birds and mammals, and, as such, are vital to healthy ecosystems that humans depend on. Insects pollinate fruits, vegetables and nuts, provide food for other creatures and recycle nature’s waste, which contributes to soil formation and water purification.

“If plants can’t reproduce, we won’t have food,” says Lessard. “It’s as simple as that.”

Bees and butterflies, however, show that sustainable cities can be designed to reduce negative impacts on biodiversity. Largely stressed by agricultural practices, monarch butterfly populations have declined to historic lows, according to Montreal’s Commission for Environmental Cooperation.

Monarch-friendly cities, however, are planting milkweed — the only plant the butterflies feed on — and supporting projects dedicated to monarch conservation, such as one in place at the Montreal Insectarium.

Nature is adaptive and bounces back when allowed to do so, he adds. Catastrophic prediction models employed 15 to 20 years ago didn’t take into consideration the ability of species to adapt quickly to pollution, climate and habitat changes. “I’m not saying there’s no problem — there is a biodiversity crisis,” he says. “But there are some things that we don’t fully understand yet that should give us hope.” 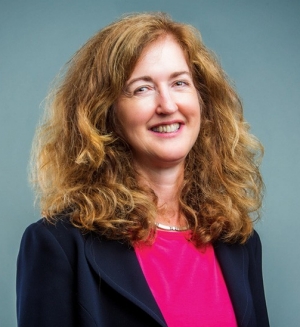 “There’s tremendous opportunity, if we can do this right, to fulfill multiple objectives,” says Monica Mulrennan.

It’s becoming clearer that relationships, rather than individual species, should be the linchpin of conservation efforts, says Katja Neves, a professor in Concordia’s Department of Sociology and Anthropology.

“Relationships bring ecosystems to life,” she says. “They also emphasize a specific way of thinking. “When you focus on individual species — lions, whales and so on — you lose sight of the complexity of the ecosystem.”

Neves is working on a special issue for the peer-reviewed Sustainability journal on botanical gardens as institutions of biodiversity conservation. Her aim is to spotlight lesser-known researchers. In Canada, that would include Indigenous scholars.

“We need to have Indigenous people as equal partners,” she says. “Wisdom of the elders, practical knowledge and an understanding of the power of personal stories are good ways of relating to ecosystems from the point of view of the production of scientific knowledge.”

Including Indigenous voices opens up venues of complementary types of knowledge that would otherwise be invisible, Neves adds. “What does conservation mean to the different people at the table? These are conversations we’ve been having for a long time at Concordia — it’s a wonderful place to be doing this work.”

Engaging Indigenous partners is critical for conservation to succeed, agrees Monica Mulrennan. The Department of Geography, Planning and Environment professor works with the Cree Nation of Eeyou Istchee on efforts to fulfill stewardship responsibilities to the lands, waters and wildlife of their traditional territories.

Mulrennan was part of a partnership between university researchers and the Cree Nation of Wemindji in northern Quebec that led to the creation of the Paakumshumwaau- Maatuskaau biodiversity reserve. The reserve put a moratorium on mining in two critical watershed areas and protected nearly 5,000 square kilometres of Cree territory from large-scale resource development.

“What distinguishes this type of environmental protection is Cree insistence on reciprocal relations, or the mutual caretaking between people and place.”

‘We have more diversity than we think’ 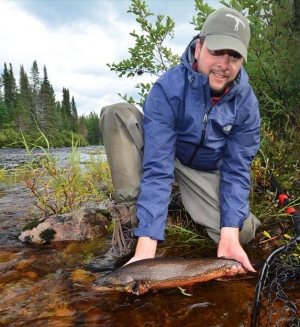 “There are huge concerns about the changes humans are imposing on the natural world,” says Dylan Fraser.

Mulrennan and Dylan Fraser, a professor in the Department of Biology and Concordia Research Chair in Population Biodiversity and Conservation, are part of a $14.5-million partnership called FISHES that weaves scientific and Indigenous knowledge to protect fisheries in Canada’s north.

“There’s a tremendous opportunity, if we can do this right, to fulfill multiple objectives,” says Mulrennan.The FISHES project (Fostering Indigenous Small-scale fisheries for Health, Economy, and food Security) pairs Cree, Inuit and Dené communities across northern Canada with biologists and social scientists to foster the development and co-management of sustainable northern fisheries and contribute to increased food security.

“There are huge concerns about the changes humans impose on the natural world, and the theory is that you need variation to adapt and survive,” says Fraser, whose lab integrates ecology, evolution and genetics in the study of effective biodiversity conservation.

Part of Fraser’s research looks at conservation and restoration of native fish important to Canada’s economy and society through fisheries and aquaculture. Native fish are also a primary food for many Indigenous communities.

Fraser’s fish restoration projects include Atlantic salmon at Fundy National Park, New Brunswick, and on Lake Champlain in New York and Vermont, in collaboration with the United States Fish and Wildlife Service.

People rightly value the Amazon for its species richness, says Fraser. But Canada also has great potential in its northern lakes.

“We have more diversity than we think. Many populations within species are evolving to live in different habitats. This diversification could lead to new, evolutionary young species and give us future options.”

That matters, adds Fraser, because conservation of variations at all biological levels — ecosystem diversity, species diversity and genetic diversity among and within populations — provides buffering and resilience to disturbances like climate change and disease.

“It could be that one of these divergent population species of fish or animals will be able to deal with new pathogens that are showing up or provide greater resilience to sustain food security for humans.

“Canada has an unprecedented opportunity for global conservation leadership in the 21st century,” affirms Fraser. “We can do this by maintaining the country’s relatively high proportion of intact natural areas and by doing it the right way — by fostering Indigenous-led conservation.”