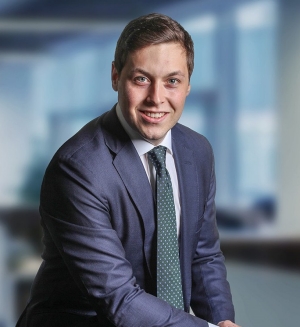 When Kevin Henley, BComm 17, was a teenager in Matane, Quebec, he had a paper route, started a lawn-care business, worked at a grocery store and spent hours on the basketball court. His father worked at a pulp and paper factory and his mother for the local newspaper.

“It was a peaceful and happy middle-class childhood,” says the graduate of Concordia’s Kenneth Woods Portfolio Management Program (KWPMP).

Nonetheless, Henley had a sense that his destiny lay beyond the Gaspé Peninsula. The French-speaker left home to attend St. Lawrence College, Quebec City’s only English-language CEGEP.

While there, Henley began to actively explore a fateful new interest.

“I became fascinated with real estate from the age of 16,” he says. “I was never into it because of architecture or design. It was about returns, leverage and how to exercise influence over an asset, which you can’t do with stocks.”

Henley began to cold call developers around Quebec City, one of which took him on as an employee. After two years, Henley enrolled at the John Molson School of Business.

“I wanted to know more about investments and private equity and saw that a lot of Woods grads had those kinds of jobs. That became my goal.”

As a finance student — and the first member of his family to attend university — Henley took every opportunity to make the most of his Concordia experience. He was honoured with the BCA Research Scholarship in Finance and the Abraham Brodt Bursary, named for the esteemed finance professor and inaugural KWPMP director.

Henley also gave seminars to hundreds of students as an undergraduate member of the Concordia Real Estate Club. He additionally distinguished himself as a business case competitor.

“When I came to Montreal, I didn’t know anyone,” he says. “Case competitions gave me access to the Concordia community. I think they should be mandatory for students because they help you grow so much, both personally and professionally.”

As much as he got out of the extracurricular side of JMSB, Henley says the KWPMP made his time singularly special.

“The program is probably the best thing that happened to me. I knew what the potential advantages were but then you discover it’s so much more. Most importantly, the friendships that I made.”

While Henley appreciated the mentorships offered by the KWPMP, he took a page from his Quebec City playbook and cold called some of the most prominent developers in Montreal to pitch them his bona fides.

One, Michael Zakuta, took a shine to Henley and connected him with Fronsac, a TSX-listed real estate investment trust (REIT) for which he was a trustee and the largest unitholder.

“It was immediately obvious that Kevin was very sharp, very passionate and very motivated,” says Zakuta, the president and CEO of Plaza REIT. “These are critical ingredients that you can’t teach.”

Run by another JMSB grad, Jason Parravano, BComm 11, GrDip 14, a Concordia 50 Under 50 honouree, Fronsac managed a tidy commercial real-estate portfolio. After he impressed Zakuta and Parravano, Henley accepted a job and has since helped oversee a span of remarkable growth as Fronsac’s CFO.

“A real estate investment trust is sort of like a mutual fund for owning real estate,” Henley explains. “We have a very particular business model, which is called triple net and management-free real estate. We buy properties destined for Tim Hortons, Couche-Tard, McDonald’s, Pharmaprix, IGA, Metro, everything service-oriented with a national tenant.

“The management-free aspect allows us to stay lean and act quickly. Once we identify a target property, we finance it properly and put it in the portfolio. Then we move on to the next. When I joined in 2017, we had 24 properties. Now, a little more than three years later, we have 64.”

The Calvin C. Potter Fellow has given back to his alma mater in significant ways. Henley, along with Woods classmates Javier Hernandez-Cotton, BComm 17, Charles Morison, BComm 17, and Ayssar Nasrallah-Fernandez, BComm 17, has helped fund an annual scholarship for KWPMP students. He also lectures part-time at JMSB. The subject? Applied real-estate investments, naturally.

“It’s a way to provide students with the tools to have an informed conversation about real estate,” says Henley, “whether that’s with the CEO of a real-estate firm or a family member who wants to buy an apartment building.”

“Whenever people ask me what they should read to get smarter about real estate, the sad truth is you have to do it. Because no one has yet written a perfect book on how to get started. So this was a window to equip students with a solid basis on a topic that still gets me excited.”