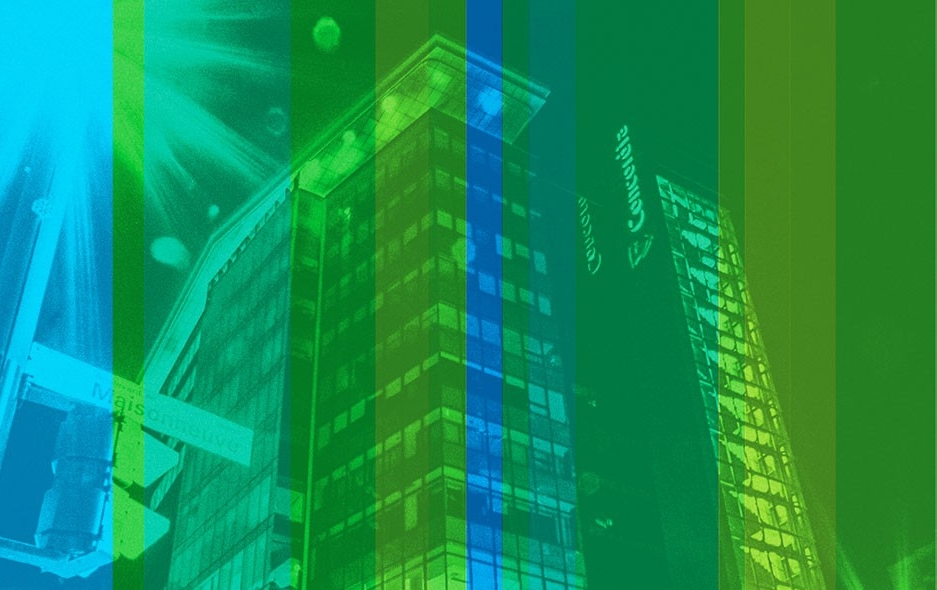 While 2020 will be remembered for COVID-19, worldwide anti-racism protests and a critical United States presidential election, for the John Molson School of Business (JMSB) it has had another layer of significance. This year marks the 20th anniversary of the school’s endowment by the Molson family and, furthermore, the 20th anniversary of two visionary programs: the Goodman Program in Investment Management and the Kenneth Woods Portfolio Management Program (KWPMP).

Like Concordia at large, JMSB had to swiftly acclimate to the challenges imposed by the pandemic. After the protective lockdown was enforced, the school took steps to ensure that academic standards were upheld, with the welfare and safety of students, faculty and staff front of mind.

A $10-million gift by Molson Inc. and the Molson Foundation, facilitated by Concordia Chancellor (1993-2005) Eric Molson, LLD 06, helped reposition the former Faculty of Commerce and Administration for the 21st century.

“It was a transformative gift that ushered in a new era of business education for Concordia,” says Croteau. “With the Molson family name at the head of our faculty, our brand has grown exponentially, as has the reach of our graduates.”

“His devotion to Concordia, his strength of character, his dignity and his consideration of others have been nothing short of exemplary.”

The momentum sparked by Molson in 2000 was soon boosted by another $10-million show of support to help fund a new home for the business school. When the state-of-the-art $118.5-million John Molson Building (MB) was ceremonially unveiled in 2009, it marked the crescendo of an unprecedented commitment to Concordia by Eric Molson and family. 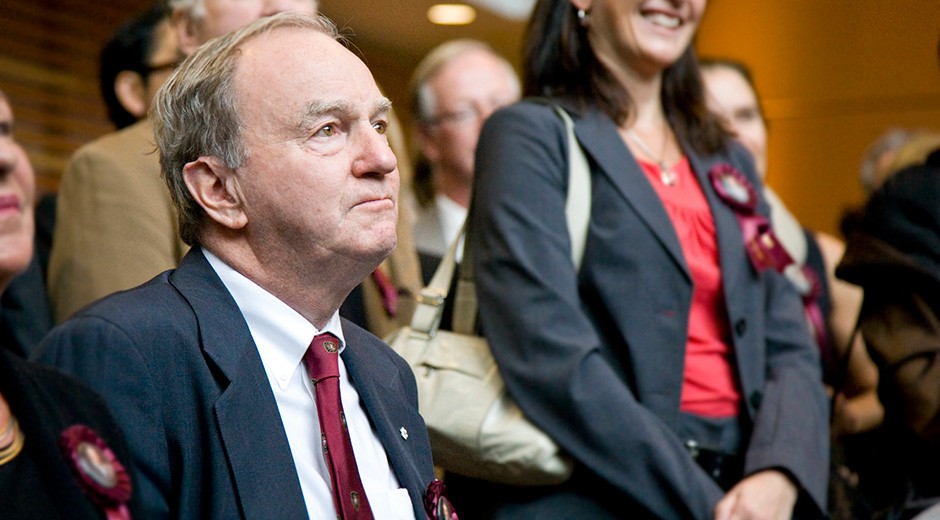 The visibly moved chairman emeritus of Molson Coors told the audience of distinguished guests that he was proud to have his ancestor’s name so closely associated with the university.

“We take pride that the Molson family’s relationship with our university remains just as strong today with Andrew Molson as co-chair of the Campaign for Concordia — our most ambitious fundraiser to date,” says Paul Chesser, BA 94, GrDip 97, vice-president of Advancement at Concordia.

In the two decades since the initial Molson endowment, the business school has racked up one impressive accomplishment after another.

As the trophy case in the Molson Building lobby attests to passersby, JMSB undergraduate and graduate students have consistently outclassed competitors at case events — an important benchmark for success.

Notably, soon after the Molson family’s generous gift, JMSB became the first business school in Quebec — and only the fourth in Canada — to be fully accredited by the U.S.-based Association to Advance Collegiate Schools of Business (AACSB).

Other accolades, from a spot on The Economist’s annual list of the top 100 MBA programs worldwide to the establishment of novel research centres and think tanks, such as the Institute for Governance of Private and Public Organizations (IGOPP), a joint venture with HEC Montréal, have further elevated JMSB’s profile. In 2019, the business school became the first to earn a Parity Certification from Women in Governance, a non-profit that supports women in the areas of leadership development, career advancement and access to board seats.

To this list, one has to include two innovative programs that, as it turns out, both turned 20 in 2020, too.

When Ned Goodman, LLD 97, one of Canada’s most esteemed merchant bankers, donated $1 million to JMSB in 2000, it was in service of a fairly radical proposal: a part-time MBA program with a Chartered Financial Analyst (CFA) track, that would enable students to work concurrently in finance in Montreal or Toronto.

With that, JMSB became the first CFA-partner business school in Canada — and one of the first in the world.

“Two things about the Goodman Program in Investment Management make it really unique,” says Sandra Betton, a Goodman lecturer. “The very close relationship between the curriculum and the CFA program and the fact that it’s offered simultaneously in two cities. The vision Ned Goodman articulated from the start was that the CFA gets you the job, the MBA gets you the career.”

Indeed, the Goodman program, which Croteau calls “another jewel in our crown,” has become a de facto feeder school for Bay Street, Wall Street and institutional investors the world over.

“What I enjoyed the most was the diversity of the students, the friendships that flourished and, of course, the networking opportunities,” says Bonnie Yu, BComm 02, MBA 08, now a director with the Caisse de dépôt et placement du Québec. “After the Goodman Program, besides the big jump in my salary, the experience led me to more interesting career opportunities.” 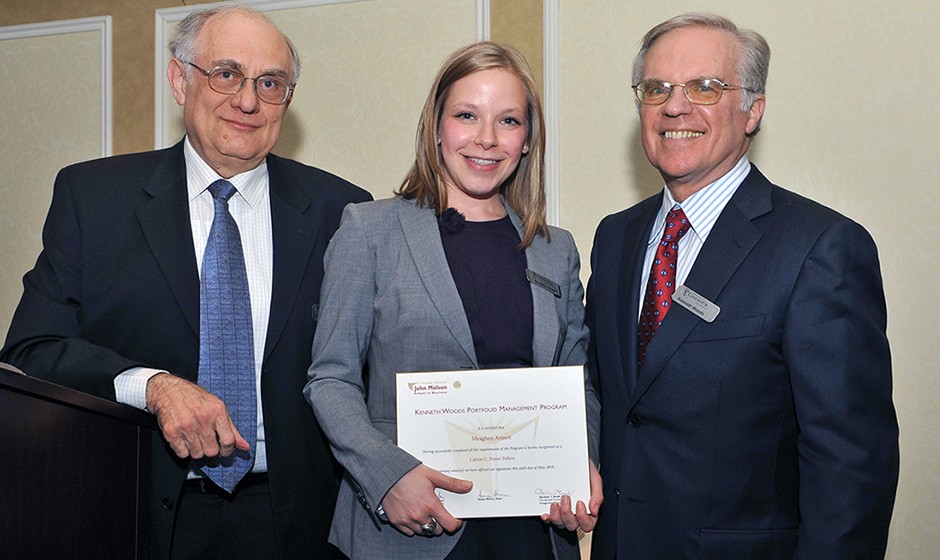 A similar comment can be made about the Kenneth Woods Portfolio Management Program at JMSB.

Established with a $1-million gift by businessman Ken Woods, MBA 75, LLD 17 — a Concordia graduate who was inspired by the late Calvin C. Potter, BComm 48, a legendary professor emeritus and chair of the finance de­partment — the two-year program gives undergraduate students the chance to manage a real-life portfolio.

“The year 2000 was important for us in many ways,” notes Croteau. “It was also the year that a long-time friend and supporter of the university made an incredible donation to found the KWPMP. The students who complete this demanding program are in the best positions to make meaningful change and impact in the investment world.”

Advised by a cohort of industry professionals who serve as mentors and members of a client committee that convenes every quarter, stock-savvy KWPMP students have collectively tripled the $1-million gift made by Woods to kick-start the portfolio two decades ago.

“I’m overwhelmed,” said a proud Ken Woods in 2010. “I hardly imagined when we began that the program would succeed the way it has.”

Judith Kavanagh, BComm 87, has served on the KWPMP’s client committee since day one.

“The program gets a 10 out of 10 from me in terms of how it prepares students for careers in finance. It’s really rigorous. Graduates go on to become major players and occupy excellent positions in portfolio management across Canada.”

Goodman and Woods alumni not only go on to chart remarkable careers, they also pay it forward.

Horvath volunteers as a case competition coach and co-lectures an investment course for KWPMP members and other JMSB students. “The school has given me so much — that’s why it’s important for me to give back.”

Graduates have generously set up scholarship and bursary funds for current students, devote time and energy as mentors, serve as lecturers and host seminars on campus.

Perhaps most importantly, they also champion and hire younger graduates from their alma mater.

“Because we’re one of the largest business schools in the world, our base of more than 51,125 alumni is growing rapidly,” says Croteau. “Alumni are a powerful force, from both a reputation-building and recruitment perspective. And we need to better harness that force by providing more opportunities for our alumni to engage with the school after graduation.

“Over the course of the next few years, we hope to establish ourselves as a lifelong learning resource for our graduates. One’s education is never complete and I believe that there is a lot we can offer our alumni after they’ve entered the workforce.” 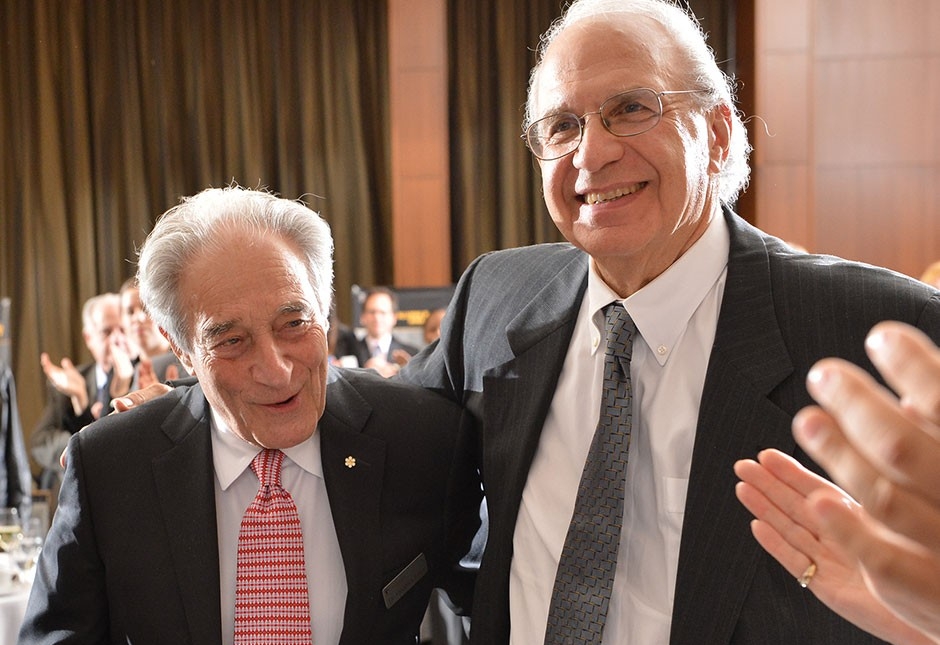