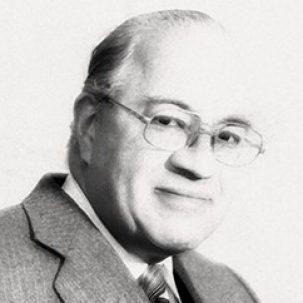 The KWPMP was established with a generous gift from Mr. Kenneth Woods (MBA 1975) in honour of the late Professor Calvin C. Potter, a much admired member of the Department of Finance who inspired a generation of business students.

Professor Calvin C. Potter was born and raised in Montreal. Following six years of overseas military service during World War II, he resumed his university studies. He received a Bachelor of Commerce degree from Sir George Williams University and an MA and PhD in Economics and a Diploma in Accountancy from McGill University. He worked at P. S. Ross in Montreal until he obtained his CA designation.

Professor Potter taught at McMaster University, where he developed courses in Finance and Accountancy. His 1966 book, Finance and Business Administration in Canada, was one of the first major works entirely devoted to the Canadian experience. After a few years at the University of British Columbia, he returned to Montreal and Concordia's Department of Finance.

Professor Potter served for many years as Chairman of the Department of Finance and helped it develop into one of the best in Canada. Part of his legacy was teaching his many students to see the various dimensions of a subject. He connected academic work to everyday life, making it more tangible.

Professor Potter also served as President of the Concordia University Faculty Association and was the recipient of numerous awards and honours from community and international organizations. Professor Potter was named Professor Emeritus when he retired.

For many years, Calvin Potter served on the Board of the Strathcona Credit Union and as Treasurer and then President of the Quebec Federation of Home and School Associations (the QFHSA). He dedicated many years and much effort to the cause of English language education in Quebec. His extensive research formed the basis of many briefs and presentations to the provincial and federal governments. He continued his active involvement in the Quebec Federation of Home and School during his retirement.

In honour of the memory of a scholar and gentleman who made significant contributions to Concordia University and to our society, the students who successfully complete the Kenneth Woods Portfolio Management Program are designated Calvin C. Potter Fellows.