Artist Kelly Jazvac, along with geologist Patricia Corcoran, writes about the consequences of plastiglomerates in the climate emergency
|
By Olivier Du Ruisseau
Source: Faculty of Fine Arts 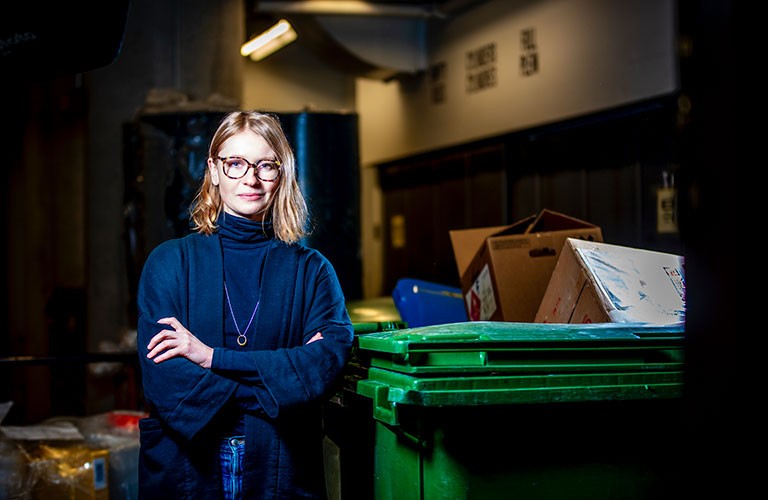 Artist Kelly Jazvac, an associate professor of sculpture in the Department of Studio Arts

Plastic pollution, whether in the ocean or ashore, has been considered as one of the most urgent issues to address in our current climate crisis.

Important contributions to the scientific research on this problem were made by Kelly Jazvac, an associate professor of sculpture in Concordia's Department of Studio Arts, and her research collaborator Patricia Corcoran, an associate professor in the Department of Earth Sciences at Western University, when they first studied and described stones that contained a mixture of natural debris (such as sand or shells), held together by molten plastic debris.

Corcoran and Jazvac recently co-wrote an opinion piece, The consequence that is plastiglomerate, in the January 13, 2020 edition of the science journal Nature. Jazvac says that the prestigious journal asked Corcoran to write about an update to their trailblazing work, and Corcoran, in turn, invited Jazvac to be a co-author.

“It was very flattering to be included in that process,” says Jazvac. “I think that speaks not only to Patricia’s generosity as a collaborator, but also her acknowledgement that a Fine Arts perspective plays an important role in this research.”

Found on a beach near the “Great Pacific garbage patch”

The two professors found plastiglomerates for the first time on the beaches of Hawaii and wrote about them in a 2014 article in the geology journal GSA TODAY (along with oceanographer Charles J. Moore) and in a 2017 article entitled Plastics and the Anthropocene.

Although the first plastiglomerates were found were on a beach near the “Great Pacific garbage patch,” she explains, they can be found on beaches worldwide, including Canada. Plastiglomerates are now widely accepted as a result of industrial activities and mismanagement of plastic waste.

If the impact of Jazvac’s work on waste reduction and policy change is still impossible to measure today, the artist and professor has without a doubt, touched many with her artworks on plastiglomerates.

Having been working with plastic since 2004, Jazvac has used plastiglomerates in her artistic practice and showed them in exhibitions internationally as ‘readymades’, meaning that they were presented as-is, as both artworks and scientific evidence.

'An interdisciplinary approach to plastics pollution awareness and action'

Jazvac is an active member of the Synthetic Collective, composed of artists, scientists who “embrace an interdisciplinary approach to plastics pollution awareness and action.”

She is currently supervising four Concordia grad student research assistants as part of the group’s ongoing research into plastic and micro-plastic accumulations. Her group’s current project focuses on post-industrial pollution in the Great Lakes region, and has future policy change as its goal. Jazvac says that the collective will publish their most recent research in the Fall of 2020, alongside a ground-breaking exhibition at the Art Museum of the University of Toronto. The exhibition will include interactive visualizations of their data, framed by questions about the longevity of plastics in the environment, versus the controlled climate of museum collections. In keeping with their environmental concerns, the Synthetic Collective is attempting to present the exhibition as sustainably as possible.