|
By Laurence Miall
Source: Faculty of Engineering and Computer Science 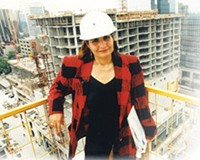 “My brother did a bachelor’s of engineering in civil engineering at Concordia,” she says. And so the day after her arrival, Cody had a chance to meet the late Cedric Marsh, one of the founding members of Concordia’s unique building studies program. “It was such a family atmosphere,” Cody recalls. “For a person who has just come from another country, that’s nice.”

Having obtained an undergraduate degree in her native Iran, Cody went on to finish her master’s and doctorate at Concordia, at one point working on an emerging technology, friction dampers, which protect buildings during earthquakes. Cody studied how to apply this invention, invented by fellow Concordian Avtar Pall, to steel and concrete buildings.

At the time, women were uncommon in engineering, especially in the construction industry. In 1989, she was the first woman to earn a PhD in building engineering. But Cody believes her gender has never inhibited her career.

“It was rewarding, because I was an anomaly – people remembered me,” she says.

Once in the workplace, one of her earliest responsibilities was inspecting cranes in Toronto. She would climb great heights and inspect them joint by joint. That’s a fitting symbol for her subsequent career trajectory. Cody is now co-owner of Ontario-based CCI Group Inc., overseeing some 150 engineers, building scientists and technologists who test building materials and inspect structures. She has been named by Profit W100 magazine as one of Canada’s top woman entrepreneurs, is the past chair of the Professional Practice Committee of Professional Engineers Ontario, and former president of the Canadian Condominium Institute (Toronto and Area Chapter).

She is also a very active member of the Concordia community, sitting on the university’s Board of Governors and chairing the Industrial Advisory Council, which helps set the direction for the Faculty of Engineering and Computer Science.

“I owe my success to Concordia,” she says. She is pleased to see the ongoing evolution of her alma mater. “It’s got great programs, niches of excellences, and is very welcoming, especially to foreign students and to locals.”