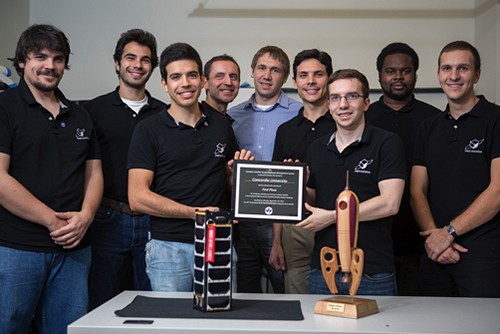 Two years ago, Scott Gleason, assistant professor in Concordia's Department of Electrical and Computer Engineering, pitched to students a daring idea. No Quebec university had ever launched a satellite into space. If the students could enter and win the Canadian Satellite Design Challenge - organized by the space consulting company, Geocentrix -  this would be their prize.

From the students' workspace on the 12th floor of the Engineering, Computer Science and Visual Arts Integrated Complex, to the gala dinner in Ottawa last weekend, where the team learned they had placed first, it has been a remarkable journey and an unbeatable learning experience.

"I am almost incredulous, thinking of all the hours of work and dedication that our whole team put in, now finally paying off with such an incredible result," said Nick Sweet, team leader, back in Montreal on Monday, sitting at a table flanked by the satellite and the trophy.

The winning teammates are members of Space Concordia, a student-run astronautical engineering association based in the Faculty of Engineering and Computer Science. The core team members, mainly undergraduates, advised by a handful of graduate students and, of course, Gleason himself, are all thrilled by the feat they have accomplished.

Smaller than a shoebox, and at 2.84 kilograms, well below the maximum allowable competition weight of four kilograms, the students' winning design, called a CubeSat, is still big enough for a "payload" of sophisticated scientific equipment. When the satellite is launched, it will orbit the earth 36 times per day and relay data back to a ground station that will be set up in the Montreal region.

The CubeSat's mission is to study the South Atlantic Anomaly, a near-Earth plasma cloud over South America, comprised of high-energy particles that are known to disrupt the instrumentation of spacecraft and aircraft. Space Concordia will be monitoring and mapping space weather in this region so the properties of the anomaly can be better known and understood.

Tiago Leao, the team's leader of the CubeSat's communication system, explains: "The satellite will be in contact with the ground station for 11 minutes of each orbit, and this is when we will be able to download the data from the South Atlantic Anomaly, as well as obtain information about the satellite's health."

For months, the team knew they had a strong satellite concept because of their strong finish in the design phase of the competition, announced in the spring. But then they had to actually build the satellite to specifications that could withstand the close scrutiny of the judges. This rigorous process was conducted by industry experts at the David Florida Laboratory of the Canadian Space Agency in Ottawa, a highly secured facility where commercial and research satellites from the United States and Europe are routinely tested.

From 12 teams that initially entered the competition, Concordia was among only three to go for final testing. No small detail is overlooked at this stage. The machining process on the finished structure must be accurate down to a 10th of a millimetre.

It's also vitally important that the satellite is tough. The Concordia satellite was mounted on what is called the "shake table" and subjected to extreme vibration testing that simulates an actual launch. If no screws have shaken loose, the satellite is in good shape. On the final days of testing, all of the satellite's functional systems were inspected to ensure they will be able to do what they were designed to do.

"The atmosphere during the testing process was just incredible," said Sweet. "We were underslept and putting in 20-hour days, but I don't think any of the competing teams would have traded in that experience. We've learned so much, and this is only the beginning of what we hope to achieve."


Find out about the team sponsors