Five of the eight inductees into the 2012 Provost's Circle of Distinction come from the Faculty of Engineering and Computer Science. The prestigious award is Concordia's way of recognizing outstanding faculty members whose contributions have already garnered external acclaim.

"This year's inductees were nominated on the basis of their outstanding accomplishments and the external recognition they have received for those accomplishments," said Concordia Provost David Graham. "They demonstrate the extraordinary combination of talents and abilities that we are fortunate to have at Concordia." 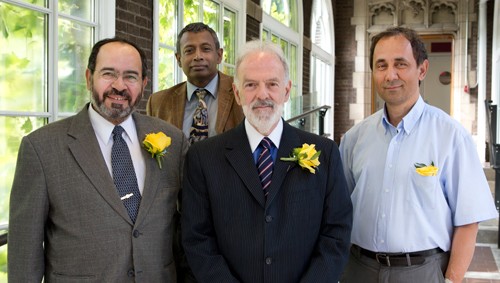 The five inductees from ENCS are:

Andreas Athienitis, scientific director of the NSERC Smart Net-Zero Energy Buildings Strategic Research Network and the founding director of the NSERC Solar Buildings Research Network; holds a Tier I Concordia University Research Chair in Integration of Solar Energy Systems into Buildings. He has also been named Concordia University Research Fellow (Senior) in 2010 and is a Fellow of the Canadian Academy of Engineering. He was associate editor of the ISES Solar Energy and profiled as one of the top 25 innovators in Quebec by Actualité magazine in 2009.

Rama Bhat, professor at Concordia University for 33 years. Among his duties at the university, he was the graduate program director of the Department of Mechanical Engineering from 1988 to 1990, and from 1992 to 1994. He was the undergraduate program director from 1991 to 1992, and department chair from 2000 to 2003. Between 1998 to 2000 and from 2004 to 2008, Bhat served as associate dean, graduate studies and research in the Faculty of Engineering and Computer Science and was appointed vice-provost, academic relations from 2008 to 2011.

Ahmed Kishk, a Tier I Canada Research Chair (Senior) in Advanced Antenna Systems. Kishk is an international expert in electromagnetics and has published more than 230 refereed journals and more than 240 conference papers, as well as contributed to 13 books. Among his acknowledgements, Kishk was named Fellow of the Institute for Electrical and Electronic Engineers in 1998.

Oscar Pekau, served as chair of the civil engineering department from 1989 to 1994, and is now a professor in the Department of Building, Civil and Environmental Engineering. His areas of research include structural dynamics and earthquake engineering. Pekau received an award from Tsinghua University in Bejiing in 2001 for outstanding contributions to modeling the behaviour of dam foundation reservoir systems. In 2011, he was named a Fellow of the Canadian Society for Civil Engineering.

Pragasen Pillay, NSERC Hydro-Québec Senior Industrial Research Chair. An international expert on power engineering who has published 94 refereed journal papers and 181 conference papers.  Among his accomplishments, Pillay became a Fellow of the Institute of Electrical and Electronic Engineering and a Fellow of the Institution of Engineering and Technology (IET) in 2005, and has won the Order of Mapungubwe, Silver Level by the President of South Africa, an award that was once won by Nelson Mandela.