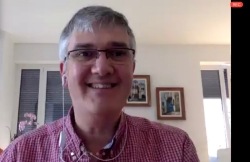 Dr. Csaba Nikolenyi, Director of the Azrieli Institute of Israel Studies and Professor of Political Science, gave a virtual talk this morning on Zoom for the Middle East Institute at New Delhi.  His talk was called After Netanyahu, who? Likud and the Future of Israeli Politics.  Over the hour and half talk and the Q&A, Dr. Nikolenyi spoke about the effect that the three elections have had on the country and how Israeli Prime Minister Benjamin Netanyahu is handling the second wave of COVID-19 amongst the many topics that were covered.

Since the talk was early in Montreal, 6:30 am, we are working on getting the talk posted on our YouTube page over the next couple of weeks.

An update in September 2020: If you missed the talk and the Q&A.