Exploring the Good Person of Szechwan

The Good Person of Szechwan is one of the most famous plays by German playwright Bertold Brecht (1898-1956). It has been produced  regularly around the world since it's creation in 1943.  It is a unique blend of philosophical drama and comedy, displaying the virtuosity of this immense writer. The story is delivered as a fable on human duality, a battle between good will and ill intentions. Brecht hits where it hurts by exposing the hardships of ethical behavior when confronted with unjust treatment.

This exploration of the play will focus on the dramaturgy of space and more specifically on creating an immersive environment where boundaries between audience and performance space are systematically challenged.

Advance tickets will be available for purchase via a link posted on this webpage. The link will be posted on Friday, March 20, 2020. 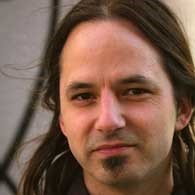 In 1990, Jean-Frédéric Messier founded Momentum, a theatrical company based in Montreal that has produced more than thirty pieces to this day. He has also written many plays for other companies in Quebec and directed several pieces in different theatres in Canada and abroad.

Since 2000, his work as a composer for the stage and the screen has become an important part of his activities. He produced many soundtracks for theatre and dance productions, as well as scores for documentaries, TV series and animation films. He wrote the music for Madame Tuttli-Puttli, an animation short by Clyde Henry Productions that was nominated for an Oscar award in 2008.

Many of his plays have been published and one of them, Au moment de sa disparition, was translated into English and into Serbian. His theatrical productions have won several prizes in Quebec. His most recent works have been for puppet theatre : Kanata - Une histoire renversée in 2010 and Corbeau (Raven) in 2012.