A New Coordinated and Contemporary Approach by the Department of Economics 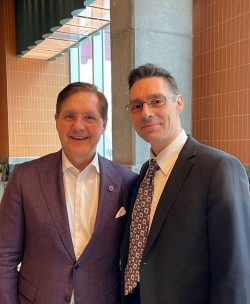 Senator Tony Loffreda discussing the Fall Economic Statement 2022 with economics professor, Dr. Anthony Noce, over brunch. The Senator is excited and looking forward to continuing the discussion on January 30, 2023, at Concordia University. He is encouraging everyone to attend the Economic Policy Armchair discussion. ⒸAnthony A. Noce

The mode of delivery and student performance evaluation have been changed in order to align the quality of learning to larger trends and substantial challenges facing society and to link the courses to Concordia University’s strategic initiatives. The policy courses are distinguished from the other B.A. courses in the Economics programs, which commonly provide more abstract technical training, with less opportunities to apply theory to “real world” policy problems.

In Canada, civil servants prepare “briefing notes” (BNs) on the advantages and disadvantages of specific policy options, for presentation to a Cabinet minister, who then suggests a policy to Cabinet. These policy choices are debated privately within government and then subjected to public critique by the opposition. To mimic this process, the economic policy courses will teach students to write well-prepared briefing notes that quickly and effectively inform a decision-maker about a (complex) issue.

Want to best your opponent? Evidence-based arguments are necessary, but not sufficient. Extensive classroom discussions on complex, interdependent  issues will help the student have the confidence to speak in public with logic, improve their the ability to read an audience’s reactions; and, perhaps most importantly, incline the student to a willingness to hear others’ opinions, and to respond to them.

i. What policy changes should Canada undertake to significantly offset population aging?
ii. Does Canada require more pipelines?
iii. Should Canada relying heavily on immigration for its continued economic growth?
iv. What effects does increased immigration have on the natural environment (i.e. the ecological footprint)?
v. Why do so many people think that the Canadian Pension Plan (CPP) is on shaky ground? The second question: are they wrong?

i. Has trade liberalization promoted development around the world?
ii. Should countries always specialize only in the production of goods & services in which they have a comparative advantage?
iii. Should the U.S. government subsidize high technology industries?  Should Canada subsidize Bombardier?
iv. Compared to rich-country standards, environmental standards in low- and middle-income countries are lax. Should we oppose free trade for this reason?
v. Economist Jeffrey Sachs and geographer Jared Diamond argue that tropical climates are more prone to infectious diseases such as malaria and dengue fever, which result in poverty. Do you agree?
vi. Do Donald Trump and Brexit represent the end of trade agreements?

At least one subject-matter expert from government, a think-tank, academia, business, and/or the Bank of Canada will be invited as a guest speaker on certain topics each semester. The topics that a guest speaker may address are fluid.  They may speak to Canada’s energy policy, Canada's taxation policy, the manner in which budget estimates are compiled by Finance Canada, Canada's participation in world institutions or the role of international institutions such as the International Monetary Fund (IMF) play in economic development. Please see link below on past, current and future guest speakers.

Mr. Tony Loffreda was appointed to the Senate of Canada in 2019 by the Governor General of Canada on the advice of the Prime Minister.  He is the first Canadian born Senator of Italian descent.

He currently sits on the Senate’s National Finance Committee and its Banking, Trade and Commerce Committee.  He also serves on a number of Senate Working Groups and is Vice-Chair of the Canada-Italy Interparliamentary Group.  He is a member of the Independent Senators Group.

Prior to his appointment, Senator Loffreda was a Vice Chairman and Executive at RBC. He brings to the Senate over 35 years of experience in the financial industry.

Senator Loffreda has served on various boards and committees including, but not limited to, the Concordia University Board of Governors; the Integrated Health and Social Services University Network for West-Central Montréal; Montréal International; the Italian-Canadian Community Foundation; the Italian Chamber of Commerce in Canada; and the executive committee of the Chamber of Commerce of Metropolitan Montréal.

Once nominated to the Canadian Senate, Senator Loffreda retired from RBC and resigned from the twenty-one boards he was serving on.

He is a leading philanthropist, active in service to many communities, having chaired fundraising activities across the province for various causes such as the Giant Steps School; the Montréal Jewish General Hospital; McGill University Goodman Research Centre; the Montréal Cancer Institute and many more. He is also a frequent and sought-after speaker on economic and community issues.

Among his many awards and distinctions, he is a recipient of the Lieutenant Governor of Québec’s Gold Medal for Exceptional Merit; the Queen Elizabeth II Diamond Jubilee Medal; the Governor General of Canada Sovereign's Medal for Volunteers; the Canadian Italian Business and Professional Association’s Person of the Year Award; the Philhellene of the Year Award by the Hellenic Community of Greater Montréal; and the Senate of Canada 150th Anniversary Medal which he received prior to his appointment.  He was also inducted as an administrator into the Montréal-Concordia Soccer Hall of Fame.

He earned his Bachelor of Commerce degree with a major in accounting from the University of Concordia.

Born in Manitoba, Senator Massicotte obtained his Bachelor of Commerce (Dean’s Honour List) in 1974, from the University of Manitoba.

From 1977 onwards, he was successively appointed to senior executive positions with commercial real estate development firms in Western Canada, before moving to Montreal in 1985 to join the Alexis Nihon Group, a major commercial real estate owner. Senator Massicotte was President and co-owner of Alexis Nihon from 1985 to 2006. He was also the owner of Attractions Hippiques from 2006 to 2009.

Senator Massicotte also acted as Honorary Co-Chair at fundraising campaigns for the George Stephen House Trust Fund and was one of the Honorary Patrons for the financial campaigns of Quebec women shelters Le Chaînon. Senator Massicotte and his wife organized different fundraising activities including a fashion show benefitting the Centre d’Action Bénévoles de la Vallée de la Richelieu. Most recently he sat on the Board of Directors of the Ste-Anne’s Hospital Foundation. He is still active with several other social and charitable institutions. 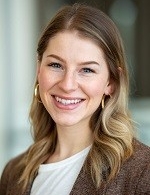 Kayley Lenders is a young professional currently working as a policy analyst at Public Safety Canada on Indigenous policing issues. After graduating with a Bachelors of Global and International Studies from Carleton University, Kayley’s passion for social change, education and travel is what propelled her into a career in social policy.

As a student, Kayley was afforded the opportunity to work as an intern for the Uganda Law Society in Kampala, Uganda, while also studying at Makerere University. Kayley later worked with Insight Global Education, a social enterprise, sharing her knowledge of social justice and responsible tourism by leading educational experiences for Canadian youth in Costa Rica and the Yukon.

Kayley began her career as a public servant at Health Canada as a policy analyst, engaging with health stakeholders across Canada to inform and develop innovative health products and food policy. She is now on an assignment with Public Safety Canada working to co-develop a legislative framework for indigenous policing. In her spare time, Kayley enjoys cycling, practicing yoga and experiencing new cultures.

Glenn Purves has a vast range of experience in expenditure management and fiscal policy, having served at Finance Canada for almost two decades.  Most recently, he served as Associate Assistant Deputy Minister of the Federal-Provincial Relations and Social Policy Branch.  His previous roles at Finance included Director General of Fiscal Policy Division in the Economic and Fiscal Policy Branch and Senior Director in the International Trade and Finance Branch, with responsibility for international economic analysis and supporting the G7/G20 process.

Glenn also served at the Canadian High Commission in London, UK representing both Finance Canada and the Bank of Canada during the 2007-08 financial crisis and at the International Monetary Fund in Washington, DC. in the Canadian Executive Director’s Office.

He holds double master's degrees in Economics and Public Administration, from Dalhousie University in Halifax.

Guest lectures:
Expenditure Management: The Treasury Board role in resource allocation and reporting
Overview of the International Money Fund (IMF)

The Intersection of Energy, Transportation and Environment: Selected Issues

Dr. Lawrence McKeown is a division chief and principal researcher for the Environment, Energy and Transportation statistics programs at Statistics Canada. He started with Statistics Canada over 25 years ago as a regional advisor in the Toronto office and has since worked with both household and business surveys. A graduate of the University of Toronto, Dr. McKeown has also worked as a research associate at Dalhousie University, an assistant professor at McMaster University and as a senior research associate at Imagine Canada.​

Dr. Anthony Noce, who has joined the Department of Economics in Fall 2019, is the Economics Policy Courses coordinator. A passionate teacher who was honoured with State University of New York’s (SUNY) - Plattsburgh’s prestigious Teacher Excellence Award also worked as a senior economist and policy analyst for three federal government departments — Health Canada, Industry Canada and the Department of Fisheries and Oceans. Dr. Noce was responsible for a variety of economic and policy files. He also served as a delegate for the Canadian government at the Organization for Economic Cooperation and Development (OECD), Paris, France, participating in the development of the first surveys on information and communication technologies (ICTs).