Neurogenesis in a species of Central American fish depends on the presence of predation risk, Concordia research finds

High-risk cues can lead to larger brains, but their absence sees those negated, according to a new study by Grant Brown and Braeden Donaldson
|
By Patrick Lejtenyi

Chemical alarm cues detected by a type of juvenile freshwater fish native to Central America result in noticeable increases in certain regions of their brains. That’s according to new research by two Concordia scholars.

The paper was published in the Proceedings of the Zoological Society by Grant Brown, a professor of biology in the Faculty of Arts and Science, and his former student Braeden Donaldson, MSc 18. In it, they write that juvenile convict cichlids that are repeatedly exposed to high-risk alarm cues over a period of two weeks have brains that are on average 16 per cent larger compared to a low-risk group. The growth, they note, is especially noticeable in specific regions of the brain: the high-risk group had on average 20 per cent larger olfactory bulbs, 21 per cent larger optic bulbs and 18 per cent larger hypothalami.

The researchers also found that when the alarm cues were removed, the brains of the high-risk group reverted to the size comparable to those seen in the low-risk group after 11 days.

“We know, based on our previous research, that we will observe changes in the behaviour of juvenile fish after 14 days of exposure to high-risk cues. The next step was to see what was happening in the brain,” explains Donaldson, who is now pursuing his PhD at the University of Victoria. “We wanted to see if there was an underlying neuroplastic response that correlates to these behavioural changes. We found that there was.” 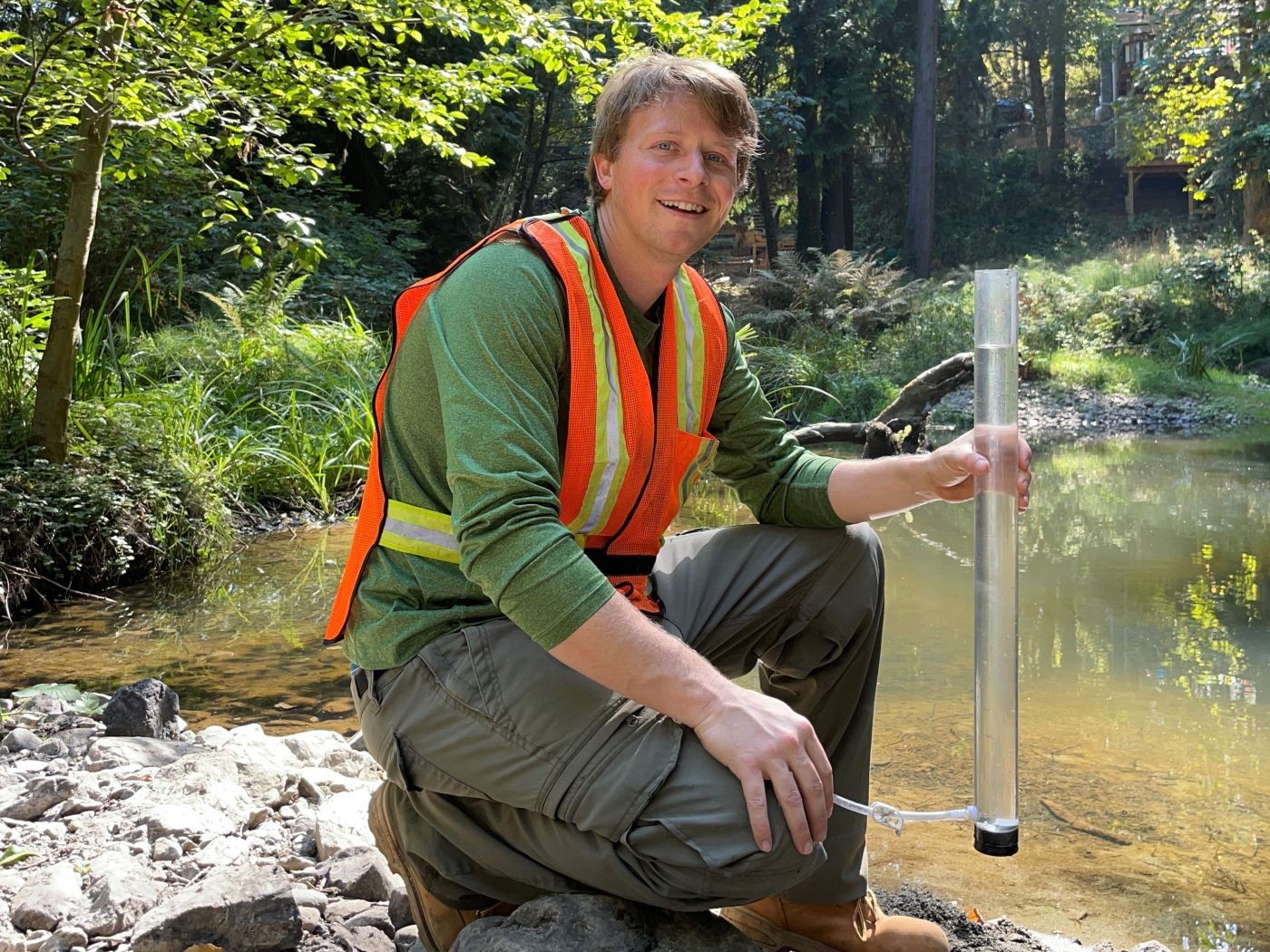 Braeden Donaldson: "We wanted to see if there was an underlying neuroplastic response that correlates to certain behavioural changes. We found that there was.”

The high cost of neurogenesis

The researchers randomly assigned 86-day-old cichlids to one of two treatment groups. Each group consisted of five tanks containing shoals of 28 fish. One group was exposed to a solution made from processed skin from euthanized convict cichlids. This was deemed the high-risk group.

Like many other aquatic prey species, convict cichlids release a chemical cue when their skin or underlying viscera is damaged. This serves as a reliable and honest warning of the presence of a predation threat. The damaged skin was processed to create an alarm cue extract, which elicits antipredator behaviour. The high-risk group was exposed to this extract three times a day for 14 days, simulating nearby predation events. The researchers introduced a similar amount — 10 millilitres — of distilled water to the low-risk group, to control for the environmental disturbance. At the end of the 14-day period, half of the fish were removed from each of the 10 tanks for analysis. 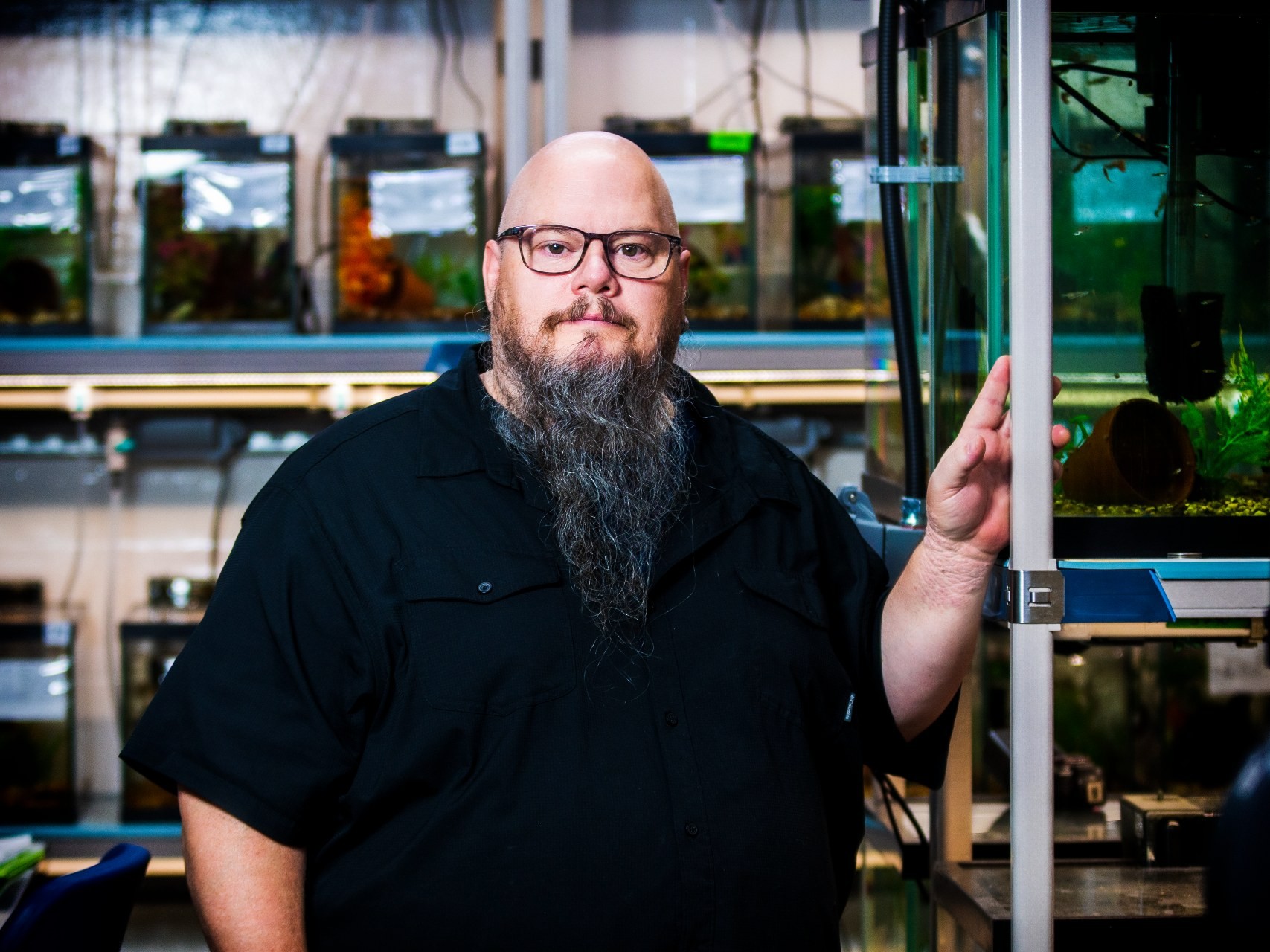 Grant Brown: “Variations in the environment shape how an animal allocates its energy. And that is the idea of plasticity.”

The remaining fish were kept in their tanks and not exposed to any further disturbances for a further 11 days until they too were removed for analysis.

The results showed that the brains of the fish grow when they are repeatedly exposed to predation cues but revert when those cues are removed. The researchers cannot determine if the reversion is due to a slowing of brain growth or if it is the result of the rest of the fish’s body catching up now that it has extra energy.

“We had predicted this reversal because neurogenesis — the production of neurons in the brain that cause it to grow — is energetically very expensive,” Brown says. If an animal does not need to produce extra neurons as a survival mechanism, it will use that energy to grow in size, strength and sexual maturity. This, Brown asserts, suggests reversible neuroplasticity. The study adds to the work of Brendan Joyce, a PhD student in Brown’s lab, who has shown similar brain morphology changes in adult redbelly dace and juvenile Atlantic salmon.

“Twenty years ago, evolutionary biologists would look at behavioural decisions and say, ‘The animal will do this or do that.’ But it is more likely the case of, ‘The animal can do this or do that,’ depending on the environmental signals it is getting,” Brown adds. “Variations in the environment, in food availability, mating, predation — all of these factor in and shape how an animal allocates its energy. And that is the idea of plasticity.”

Financial support for this study was provided by the Natural Sciences and Engineering Research Council of Canada, Discovery Grants Program.