Public conversation series explores the spaces that empower us

The conversation series is set in community spaces and cafés across Montreal. | Photo: Marion Elissalde

What is our responsibility to the natural world? What does community-based health care look like? And how do we make room for the next generation of engaged youth?

These are some of the questions participants will grapple with during the upcoming season of University of the Streets Café. The public conversation series, organized by Concordia’s Office of Community Engagement (OCE), is set in community spaces and coffee shops across Montreal.

This season’s theme is Public Choices/Private Impact. It kicks off February 21 with a discussion about our environmental responsibilities.

“Last term, we looked at whether individual will can drive social change,” says Alex Megelas, programs and communications coordinator at the OCE.

“This season we're looking at the framework that defines our capacity to act.”

The conversations will examine links between decision-making spaces such as the workplace or political spheres, and people’s ability to express themselves, incite change and be active in their communities.

Most of the events will be anchored in two Montreal neighbourhoods, Park Extension and Little Burgundy.

“We’ve had an ongoing relationship with a number of citizen-led initiatives in both of these neighbourhoods over the past year," says Megelas.

“So hosting multiple conversations in these areas will let us directly explore the season’s theme by connecting with folks who are active on the ground.”

Affordable housing for all: is housing a human right or a privilege?

This evening discussion on March 1 will examine whether safe and affordable housing should be a right afforded to everyone, and what alternatives to current social housing programs exist.

“It’s based on a community bonds model, something we rarely see in a Quebec context. So it’ll be interesting to see what this developing project represents in a neighbourhood where residents are now faced with displacement as a result of increased development interests.”

Abhuani will be joined by representatives of the Comité d’action de Parc-Extension (CAPE). Tejaswinee Jhunjhunwala, whose studies and work focus on social justice, environmental and economic issues, will moderate. 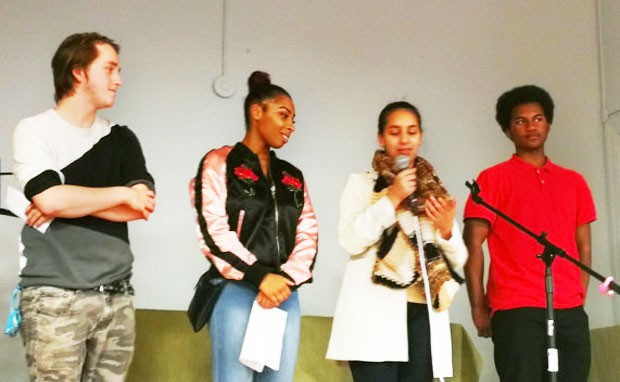 Members of the Press Start Youth Coop at a launch event for their crowdfunding campaign.

Listening to youth voices: how do we make room for the next generation of engaged youth?

This conversation will look at how young people can be brought in as equal stakeholders to address social change.

“Oftentimes we talk about a commitment to fostering youth leadership, but rarely does that translate into giving up some of our holdings so that youth can have a commensurate seat at the table,” says Megelas.

“Giving youth an equitable share in their ability to influence decision-making is especially relevant in the Little Burgundy context, as it’s a small neighborhood that’s seen a lot of changes and is now contested in many ways.”

Andrea Clarke, director of Head & Hands, will moderate. Dorothy Williams, a historian who specializes in Black Canadian and Montreal history, joins as a guest, along with youth from the Press Start Youth Coop, a for-and-by cooperative arcade initiative that emerged from Saint Columba House.

Health and community: What could community-based health care look like if people counted?

Despite institutional commitments, many are still unable to gain access to necessary health care services. Speakers this night will discuss ways to change that.

“This conversation is significant for me as it was initially developed by a collaborator of our program, and a friend, Abby Lippman, who passed away over the holidays,” says Megelas.

“The idea really came out of her long-standing commitment as an organizer and researcher in Montreal, so it will be poignant to now watch it unfold.”

Myriam Zaidi, who has been involved in social justice work in Montreal for over a decade, will moderate.

Guests include rosalind hampton, a postdoctoral researcher in urban teacher education at the University of Ottawa; Bilkis Vissandjée, professor of nursing at Université de Montréal; and Geneviève Rail, a kinesiologist and professor of feminist cultural studies of health at Concordia’s Simone de Beauvoir Institute.

Find out more about upcoming University of the Streets Café events.