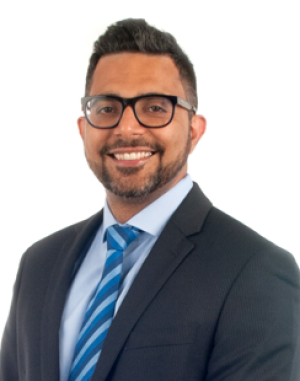 "The program provided an opportunity to be mentored and taught by professionals who shared their valuable experiences and spent countless hours helping me," says Sain Godil.

Sain Godil, BComm 11, MSc 13, was raised to know what it takes to build successful companies from the ground up.

In Goa, India, where he grew up in a family of entrepreneurs, Godil sold men’s clothing at his shop and at the weekly flea market.

“I would just take all my stuff on my bike and put up a store for a day, then pack up and go somewhere else,” says Godil, now a portfolio manager at Global Alpha in Montreal.

“My parents had a business and my uncles were industrialists. I think I'm the first one in my whole family to work for a salary.”

Godil soon became fascinated by not just running businesses but investing in them, buying his first mutual fund at the age of 16 with money borrowed from his parents.

Following jobs that included teaching math and working for one of India’s largest banks, Godil left home for Quebec.

‘I had this chance to start my life again’

Like many immigrants, Godil found his credentials and experience were not accepted in Canada. He would have to pursue a second degree as a mature student to obtain the career he dreamed of.

“I wanted to learn about investment and I had this chance to start my life again,” he says.

Concordia’s Kenneth Woods Portfolio Management Program (KWPMP) gave him not just the education, but the encouragement and confidence he needed to succeed.

“The program provided an opportunity to be mentored and taught by professionals who shared their valuable experiences and spent countless hours helping me. [Lecturers] Michael Gentile, BComm 03, and Philippe Hynes, BComm 02, are the reason I’m in the business today.”

“I was also lucky enough to surround myself with other students who were really driven. There was a fair amount of support and a positive, competitive atmosphere.”

Godil, who was named KWPMP valedictorian when he graduated, says the fact that the program and its client committee allow students to learn and make mistakes while managing a real-world portfolio has enormous career benefits.

Outside of class, Godil was an early member and president of the John Molson Investment Society, where investment enthusiasts from across the business school meet to discuss the markets. He says his status as a mature student was also a plus.

“I knew what my goals were, as opposed to some others who were not clear — and rightfully so. I was in their shoes when I was younger.”

From valedictorian to partner

As a KWPMP student, Godil landed an internship at Global Alpha, where he was later hired as a junior analyst. He worked while completing a Master of Science in Finance (MSc) at Concordia and later earned his Chartered Financial Analyst (CFA) cerfitication.

More than a decade later, Godil says his biggest career achievement so far is being named partner at the firm. In his role as a portfolio manager at Global Alpha, he is responsible for analyzing North American and Israeli companies.

Godil also covers a number of diverse industries, spanning everything from pets, debt collectors and dollar stores to telecommunications and the swimming pool market.

“Everyone loves cats and dogs,” he jokes. “I like companies in a growing market. ‘A rising tide lifts all boats’ is my philosophy.”

Because he invests in small cap companies, there is very little analyst coverage on the names. Godil says before COVID he would spend at least a week every month on the road, meeting with management and seeing operations first-hand to find those hidden gems.

“In any given year I have 200 to 300 company meetings,” he says. “Due diligence means going yourself to check out what's happening on the factory floor.”

“When people think about finance, they usually think of the stock market. But the industry is so broad, from real estate to private equity. There are also various other mid- and back-office functions, whether it’s risk management or compliance. They all intertwine.”

These days, Godil regularly returns to Concordia as a mentor for KWPMP and Van Berkom Investment Management Program students.

“I love learning about businesses” he says. “The KWPMP professors and the program’s ecosystem and alumni network really helped me get to where I am in my career. Now I’m trying to give back.”

A first in Quebec, the program admits a select group of students on an annual basis who, with supervision from finance professors and mentorship from industry professionals, manage an investment portfolio now worth over $3.4 million.