How a business grad embraces management in the medical field 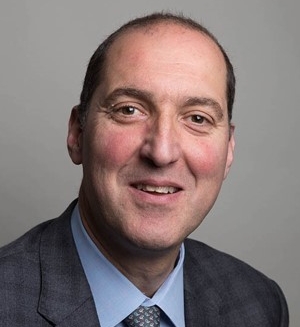 Taking helm of a company can be challenging, and all the more when the transition happens during a pandemic. John Tourlas, BComm 86, returned to Montreal to take on the role of North American president of Medicom in January.

The company is one of the world's leading manufacturers of surgical and respiratory masks, personal protective equipment (PPE) and infection control solutions — a “Canadian success story” that has been in business for 30 years.

“We've been in the news the last few months, both with the federal and provincial government in terms of supplying PPE products to both governments and across the country,” says Tourlas.

“It’s hectic and stressful in the sense that you want to make sure you're meeting your customer demands. At the same time, as an employee, you feel proud that you're helping when you see PPE items being used in hospitals.”

After graduating with a Bachelor of Commerce degree with a major in management and a minor in finance, Tourlas’s career led him to Toronto, London, U.K., and Boston, before returning to his Montreal stomping grounds.

Recalling his student days, Tourlas says he chose Concordia for the strong reputation of its commerce program. His favourite classes were the ones where his professors worked in the field. “What was really beneficial was you were not just getting the theory, but the real-life experience. To this day, I remember those sessions and courses the best,” he says.

Attending classes mostly on Concordia’s downtown Sir George Williams Campus, Tourlas got involved in sports and social activities, but also worked part time in retail to help pay for his studies. He still keeps in touch with a handful of friends from the school.

Launching his career in 1986 with a sales role at Xerox, Tourlas laughs when recalling his expectation that the ride up the ladder would be swift. “In university, we got a management degree, and we thought we were going to be managers somewhere overnight, when obviously, it doesn't happen that way,” he says. But Tourlas did see steady career progress — during his 15 years at Xerox, he ascended to national director of the company’s headquarters in Toronto.

Later, he moved over to Thermo Fisher Scientific, a manufacturer of scientific instruments and software, and was promoted to general manager of the company’s Canadian business. In 2011, Tourlas moved to London to help build a European division.

“It was a great opportunity to really learn the whole European landscape,” he says. “Also, on a personal level, it was great to encounter different cultures and travel. I would recommend that to anybody, if they ever have that opportunity,” he adds, saying that the international experience helped update his perspective on the people and culture. “Before going over, I had this perception of what things would be like, and that was probably right 50 per cent of the time. I learned so much.”

Returning from Europe, Tourlas relocated to the company’s global headquarters in Boston for a couple of years before taking on the new position at Medicom, where he had known the CEO as a supplier since 2004. “The stars lined up,” says Tourlas, adding that he’d always planned to retire in Montreal.

Medicom also continues Tourlas’s involvement with a medical supplier, something that has given him particular pride during the pandemic. The business unit that he’d managed at Thermo Fisher provided consumable plastics used by companies like Pfizer and Moderna in clinical trials, and Medicom provides the same — they recently built a new facility for manufacturing N-95 masks.

Tourlas adds that he still carries lessons gained from his undergraduate student days. “Our professors forced us to think about the big picture,” he says. “When I joined Xerox, I was a fish out of water, just wanting to learn everything. I remember those professors saying, ‘You guys need to understand that it's a learning curve; it's going to take time.’

“Now I know why they said that. My advice to students is to think big. You can achieve more if you put your mind to it and challenge yourself.”