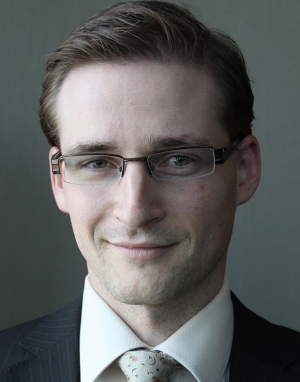 When you talk to alumni of the Kenneth Woods Portfolio Management Program (KWPMP), the name Philippe Hynes, BComm 02, comes up a lot.

A member of the first Woods class, Hynes and his peers helped give shape to the program under the patronage of Kenneth Woods, MBA 95, LLD 17, and guidance of then director Abraham Brodt.

As a result, they paved the way for what the program aspired to become: an empirical tool to help launch prolific careers in finance.

“We had a tremendous group of students,” recalls Hynes, the co-founder and president of Tonus Capital Inc. “The eight of us worked hard to establish the program. Professor Brodt did a lot of work to structure it, and the client committee, mentors and Mr. Woods were very involved.”

Hynes had an active childhood on Montreal’s South Shore, where he had a precocious sense of what it meant to work hard and save. Before he was even a teen, he worked as a youth hockey referee and baseball umpire. And while Hynes says that his parents “were not big on investments”, when his father purchased 100 shares of BCE Inc. and Alcan, he showed his son how to follow the movements of the stock market. Hynes was nine at the time.

“I still have the graphs and charts that I made for those two stocks,” he says. “I got interested in the markets from there. Then, when my sister-in-law started a salon, I helped manage it in my teens. That sparked my entrepreneurial side.”

Those experiences also inspired Hynes to enrol in the KWPMP as a finance undergrad at the John Molson School of Business (JMSB). His class set the standard for subsequent members of the program, who have since tripled the $1-million endowment Woods made to establish it at the end of 2000.

“The program gave me invaluable contacts, whether through mentorships or internships,” says Hynes. “We learned how to work as a group towards a common goal and present with confidence to a committee composed of top finance professionals.”

After Concordia, Hynes went on to HEC Montréal to secure an MSc. He worked at Standard Life Investments as an energy sector analyst, in the treasury department at Desjardins and at Van Berkom and Associates as a senior analyst and associate.

“I was sorry to see him go, though am very impressed with the entrepreneurship he demonstrates,” remarked Sebastian van Berkom, BComm 69, LLC 17, founder of the Van Berkom Small-Cap Investment Management Program, after Hynes left to start Tonus Capital.

Hynes has served as sole owner and portfolio manager of Tonus since 2011. The firm, whose target market is high-net-worth individuals and which holds a concentrated portfolio of 20 or so North American assets, has braved the turbulence of COVID-19 pretty well, says Hynes. Still, the investor urges caution.

“A return to normal profitability is probably not on the horizon for some time,” he says. “A lot of workers have been furloughed or let go. These are all consumers and the ripple effect will be significant.”

Hynes has been celebrated a number of ways for this kind of pragmatic wisdom. In 2015, he was named Quebec’s financial personality of the year under the age of 40 by Finance et investissement. But as much as he enjoys the respect of his fellow professionals, his name is held in particular esteem at JMSB and within the KWPMP.

Since 2007, Hynes has taught a course on investment analysis with fellow Woods alum Michael Gentile, BComm 03, and has mentored a new crop of finance students. For a time, Hynes and Gentile also published a newsletter for Woods alumni called Ticker Tape.

“Phil Hynes is one of the most down to earth and smartest people I know,” says KWPMP alum Michael Knight, BComm 12. “He and Mike Gentile take these JMSB students, these lumps of clay, the first semester and mould them to get them up to speed as fast as possible. Phil’s generous with his time, is scary-sharp and incredibly modest, too.”

Hynes says that the course he runs with Gentile began as “a way to coach and help the program” but has since evolved into a more profound enterprise.

“It makes me feel like I can give back to the university in a much bigger way. The fulfillment comes not from the salary that we share as lecturers, but from the positive comments and feedback. The students have a lot of passion and a strong desire to learn. For a teacher, that’s the ultimate reward.”