How one John Molson School of Business valedictorian stuck her landing 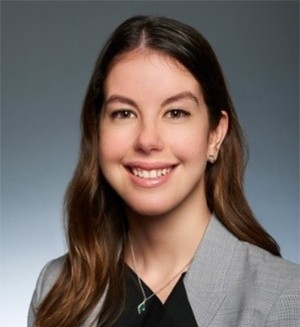 As a figure skater in her teens, Sandy Poiré, BComm 11, was faced with a choice.

The native of Thetford Mines, Que. had left her hometown at the age of 10 to live with a new family in Montreal and then Trois-Rivières. She worked with top coaches who groomed the likes of Joannie Rochette, the winner of a bronze medal at the 2010 Winter Olympics in Vancouver.

Now Poiré had to confront her own competitive prospects. Did she have a shot at Olympic glory?

“Skating had been my life up to that point,” says Poiré, “but I wasn’t necessarily on an upward trajectory. So I sat down with my father to discuss my future.”

Poiré’s father, the owner of a foundry and machine shop, was “extremely strict, in terms of grades and respect for time and money.” With his guidance and influence, she arrived at a difficult verdict.

“I decided to stop figure skating and go to an English CEGEP in Montreal. If I wanted to succeed in the business world, I needed to be fluent in the language of business.”

From the rink to the library

The decision changed her life. Poiré left the comforts of her support network and the sport she loved to enrol at Vanier College. She put in extra hours at the library to decipher her lectures and course material.

A professor soon told Poiré about the Kenneth Woods Portfolio Management Program (KWPMP). Intrigued, she decided to apply to study finance at the John Molson School of Business.

“The Woods interview was extremely stressful,” Poiré recalls, “because I didn’t have a lot of investment knowledge. Plus, it was in English.”

Poiré went on to distingush herself. She earned a place on the Dean’s List and was honoured with the David Abramson and Ron Meisels scholarships.

She was also involved with the Concordia chapter of the Golden Key International Honour Society and served on the John Molson Competition Committee. In 2008, she and KWPMP classmate Meaghen Annett, BComm 10, won the Ethics Case Competition, organized by the Eller College of Management at the University of Arizona.

As a KWPMP fund manager charged with a real-life portfolio, Poiré accumulated wisdom that she uses to this day as a senior investment officer on CN Investment Division’s (CNID) absolute return team.

“When I had to present to the Woods client committee, my approach was that I had nothing to lose,” says Poiré. “We were there to learn from top professionals in the industry and mistakes were part of the process. That was the whole point of the program.”

Top of the class

Poiré’s academic career at Concordia ended in spectacular fashion when she was named JMSB valedictorian. Her family was stunned.

“My dad didn’t understand the magnitude or why I was the only one up on stage at the lectern. He was speechless. It was such a privilege because just five years earlier, I barely spoke a word of English. I was proud of that accomplishment.”

Helen Beck, BComm 87, now executive vice-president and head of equity markets at Caisse de dépôt et placement du Québec, hired Poiré as an intern at CNID and then as a junior analyst at Jarislowsky Fraser.

“As solid a candidate as Sandy was on paper,” says Beck, “what stood out when I met her was her positive attitude, curiosity and energy.”

Marlene Puffer, the current president and CEO of CNID, has also had a formative impact. “She totally changed the culture at CNID and gave me a rare opportunity to change career paths at the company,” Poiré says admiringly.

“Sandy exemplifies the skill set that we look for in the investment industry,” says Puffer. “The Woods program laid an excellent foundation of theoretical and technical knowledge as well as practical experience that Sandy has translated into value-added returns in her roles at CNID. Her leadership and investment skills are both top-notch!”

While at CNID, Poiré became a CFA charterholder in 2014 and, in 2017, completed the accelerated MBA program at the Smith School of Business at Queen’s University.

She also pays it forward, primarily as a CFA Montreal board member and through initiatives like Women in Investment Management and Women in Capital Markets.

“What we often notice is that women start in finance and later switch to accountancy. We want to show the many career paths finance has to offer and how women can benefit an industry prone to male-centred groupthink.”

The ex-figure skater is still a strong proponent of athletics, most notably as a member of Cercle d’Influence de Fillactive, which encourages adolescent girls to stick with sports. It’s a value she hopes to pass on to her daughter, Rose Elizabeth.

So will Rose Elizabeth Horvath celebrate the 40th anniversary of the Woods program as a member of the class of 2040?

“We’ll see,” laughs Poiré. “She’ll decide for herself and we’ll support whatever she wants to do in life.”