JUNE 17: The fundraising event will commemorate the program that has transformed the lives of people with developmental disabilities.
|
By Colin Throness 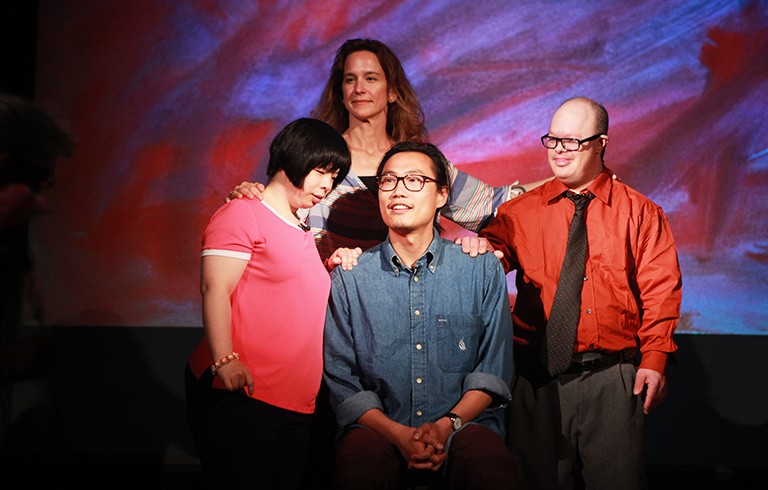 Concordia’s Centre for the Arts in Human Development (CAHD) is celebrating its 25th anniversary in June and Lenore Vosberg, its director of clinical services and public outreach, couldn’t be prouder.

Established in 1996 and unique in Canada, CAHD is an educational, clinical and research centre serving adults with developmental disabilities under the Department of Creative Arts Therapies.

In 1993, Vosberg, a social worker at the time, was in her kitchen when she had an idea. She wanted to produce a play featuring some of the adults with developmental disabilities with whom she worked.

“Disney’s Aladdin was playing in theatres the year before,” Vosberg recollects. “The theme of that show was, you don’t need a genie — believe in yourself and you will accomplish your goals.”

That was the message Vosberg wished to convey to potential participants and their families.

She pitched the idea to Stephen Snow, associate professor of drama therapy who at the time was teaching a course on theatre for special needs populations at Concordia. Today, Snow is chair of the Department of Creative Arts Therapies.

“Stephen said, if you can get 15 people from your team we’ll run a developmental drama experiential course,” Vosberg recalls. “I brought 27 people and there were 50 people in the class.”

In 1994, Snow adapted the story of Aladdin for the stage. His wife Shelley Snow wrote 16 original songs, Vosberg produced it and the result was a resounding success.

“We were seeing people from week to week get more confidence, start talking more and engaging more with the students. We managed to raise $14,000,” Vosberg says.

Propelled by the positive results of both the show and the research, she and Snow teamed up with Miranda D’Amico, professor of education, and in 1996 CAHD was born.

“Our long-term and multi-directional research program has evaluated the effectiveness of Creative Arts Therapies and continues to make an impact in the field of disability and the arts to this day,” D’Amico says.

“It was just a serendipitous thing to have everybody meet at the time we did and create this program.”

‘Looking forward to a bright future’

While CAHD started by offering art therapy and drama therapy program internships, 10 years ago it branched out into music therapy and soon into dance/movement therapy as well.

“With these therapy sessions I felt like I blossomed,” says past participant Stephanie Boghen. “I’m looking forward to a bright future and it’s slowly happening because of this place.”

The life-transforming centre not only puts a spotlight on the talents of people with developmental disabilities — it also focuses on encouraging social inclusion by showcasing their abilities, advocating for their rights and, in turn, changing the perception of them.

Over the years, CAHD has produced 13 original shows — 12 written by Snow — and more than 100 original songs. In addition, the program has hosted more than 250 interns and about the same number of clinical therapy participants.

“There’s an educational part of the mission,” D’Amico explains. “We provide internship and supervision for master’s students in creative arts therapies. Along with numerous internship opportunities for students in the Department of Education.”

Snow adds that for 25 years the centre has been committed to providing a space for improving the lives of individuals with developmental disabilities by using the creative arts therapies.

Vosberg emphasizes that it’s a highly positive training site for the department. “Students are enriched by getting to know this population.”

CAHD will be celebrating its anniversary Silver Jubilee on June 17. Graduates of the centre, their families, past interns and staff, and supporters and members of the community are invited to attend the a virtual fundraising event.

After the show, there will be a screening of a documentary highlighting the centre’s achievements over the past quarter decade.

Find out more about Concordia’s Centre for the Arts in Human Development.