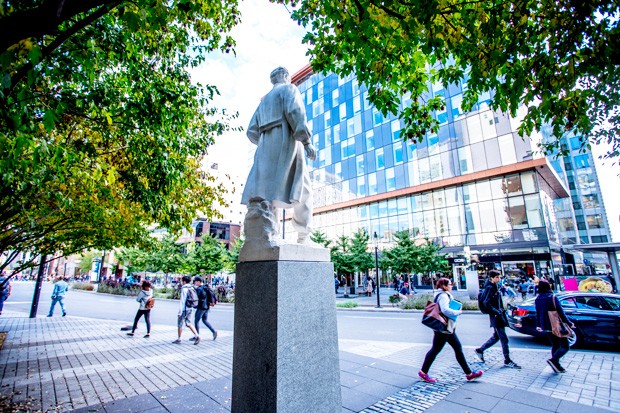 Clarence Epstein: “The Vitrines project is all about tying the university into its physical environs.”

How does the public space surrounding the downtown campus define us as a university community?

This is a question addressed in the eighth instalment of the Quartier Concordia series, currently exhibited in the vitrines of the Engineering, Computer Science and Visual Arts Integrated Complex (EV).

Public Spaces and Gathering Places highlights the creation of Norman Bethune Square as a gathering point for numerous rallies, the use of Mackay Street as a concert ground and the recent development of Zone Éducation Culture on Bishop Street.

Clarence Epstein, senior director of Urban and Cultural Affairs at Concordia, points out that people have come together around the university — in Stanley Cup parades, demonstrations, performances and cultural events — mostly in spaces not designed as gathering places.

“Following the construction of Cabot Square in the late 19th century, very little priority was given to public space planning,” he says.

“What we recognize as gathering places have appeared as a result of the way the neighbourhood has evolved. They’ve been appropriated by the various people and organizations who live in and occupy these spaces.”

Now, the planning of new public areas is a priority for the city’s administration and local stakeholders, including the university.

In tandem with the new exhibition, Concordia joined with the City of Montreal’s Department of Public Works to launch a visioning charrette to engage the entire community in determining the future of the alley that runs south of the J.W. McConnell Building (LB) between Mackay and Bishop streets.

A charrette is a participatory design program allowing professionals, scholars and students to join community stakeholders in discussing and visualizing the possibilities for an urban space.

“We understand from the City of Montreal that this space is going to change,” Epstein says, noting that municipal officials have also placed a reserve on an adjacent parcel of land slated for a park at the corner of Mackay and Ste-Catherine streets.

“The goal of the charrette and other initiatives like it is to inform good design decisions through collective reflection and communication.”

The LB Alley charrette took place on October 21 and 22 in the LB atrium, J.A. DeSève Cinema and in the alley itself. The public was invited to engage in “planning-in-situ,” with walks-through, video-photographic analysis and community sketches.

Discussions were led by Silvano De la Llata, assistant professor of geography, planning and environment in the Faculty of Arts and Science. He says the process encourages the public to plan spaces for themselves — from the spaces, because they are the ultimate users.

From Modernism to democratization

De la Llata explains that in the first half of the 20th century, the dominant approach to urban planning was Modernism, in which form followed the function architects believed spaces should have, rather than the way they were actually used.

Modernist planners felt they knew best how people should behave, and built cities designed to coerce citizens into using spaces as they intended them to. According to De la Llata, this resulted in a wide array of urban planning disasters.

“Modernist planning transformed cities in a way that wasn’t very democratic,” he says.

“The motivation here is democratization. We want to understand what qualities people want to see in the space, and to give a chance to Montrealers, the Concordia community, St. Jax Church, McKibbins Irish Pub and other restaurants and businesses on the periphery of the alley to participate in the planning and design of the space.”

Find out more about the Zone Éducation-Culture, Concordia’s new artistic hub on Bishop Street in collaboration with the Museum of Fine Arts.