Waste not, want not

A volunteer-driven composting campaign kicks off at Concordia
|
By J. Latimer 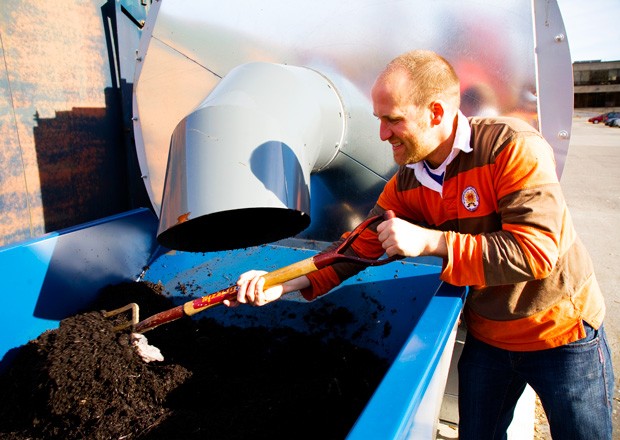 Bring us your apple cores and banana peels!

Now, there’s a more environmentally friendly way to dispose of your biodegradable cast-offs.

"Waste not, want not" is the name of the new campaign running from September 6 to 20 to promote awareness of the strengthening and optimization of existing composting efforts at Concordia.

“We also hope to encourage people — students, faculty and staff — to volunteer,” says Keroles Riad, project lead and PhD student in the Individualized program. “Volunteers will be the beating heart of this campaign.”

Riad notes that Concordia only composts 26 per cent of its compostable waste. That statistic inspired him to build on existing low-waste events at the university, like the Concordia Shuffle and back-to-school programming, and establish a complete composting cycle across campus.

From Big Hairy Idea to reality

Waste not, want not was a winner of the 2016 Big Hairy Ideas competition run by the Dean of Students Office. It was proposed by Riad, representing the Graduate Individualized Student Association (GISA), in collaboration with the Concordia Student Union (CSU), Environmental Health and Safety (EHS) and the Loyola Sustainability Research Centre (LSRC).

They created a three-pronged approach to increase access to suitable composters on campus, implement a consistent bin system and mount an education campaign.

“We’ve identified nine new bin locations in the atriums of major buildings on both campuses. That makes 22 locations in total, taking into account the pre-existing 13,” says Faisal Shennib, environmental coordinator at EHS.

Shennib and EHS are improving the infrastructure, redesigning the bins and the bin branding for cohesive labelling and working toward a new composting model that does not necessitate sending so much of Concordia’s organic waste off-campus and out of province for processing.

Pillars of the campaign

Meanwhile, Riad is prepping for the Waste not, want not events in September, starting with the social media campaign and a food festival to showcase sustainable food on campus, such as The Hive Cafe, Le Frigo Vert and City Farm School, among others.

“We’ll also be showcasing research — some food-related and food-sustainability related — from various Concordia sustainability research centers such as the PERFORM Centre, LSRC and the INDI program,” says Riad, adding that there will be creative billboards, videos and comedy skits about composting, as well as volunteers dispersed to explain how to compost.

“Implementing a state-of-the-art operating system without an extensive education campaign about how to use it would be putting the proverbial cart before the horse,” says Peter Stoett, director of the LSRC.

Consequently, Stoett and Riad created a way to engage students, faculty and staff in the educational drive. Funded by the Concordia Council on Student Life (CCSL), the teaching component includes the food festival and outreach presence on campus in September, plus the ongoing work of volunteers.

“For example, faculty volunteers can agree to devote one minute at the beginning of classes to tell students that we have new compost bins and allow one of our volunteers to present the project,” says Stoett. “Staff, for example, can agree to have a sign on their desk to encourage students to compost … And everyone can wear a T-shirt and participate in social media.”

Students can help at the food festival and volunteers to be stationed at compost bins to explain the proper procedure — what food goes where.

“More effective triage of organic waste at the collection bins will greatly improve the efficiency of composting,” says Roger Côté, vice-president of Services at Concordia. “As a next-generation university, we like to lead by example.”

Student, faculty and staff — everyone has a role to play! Sign up and volunteer to become an active participant in Concordia's new composting initiative, "Waste not, want not.