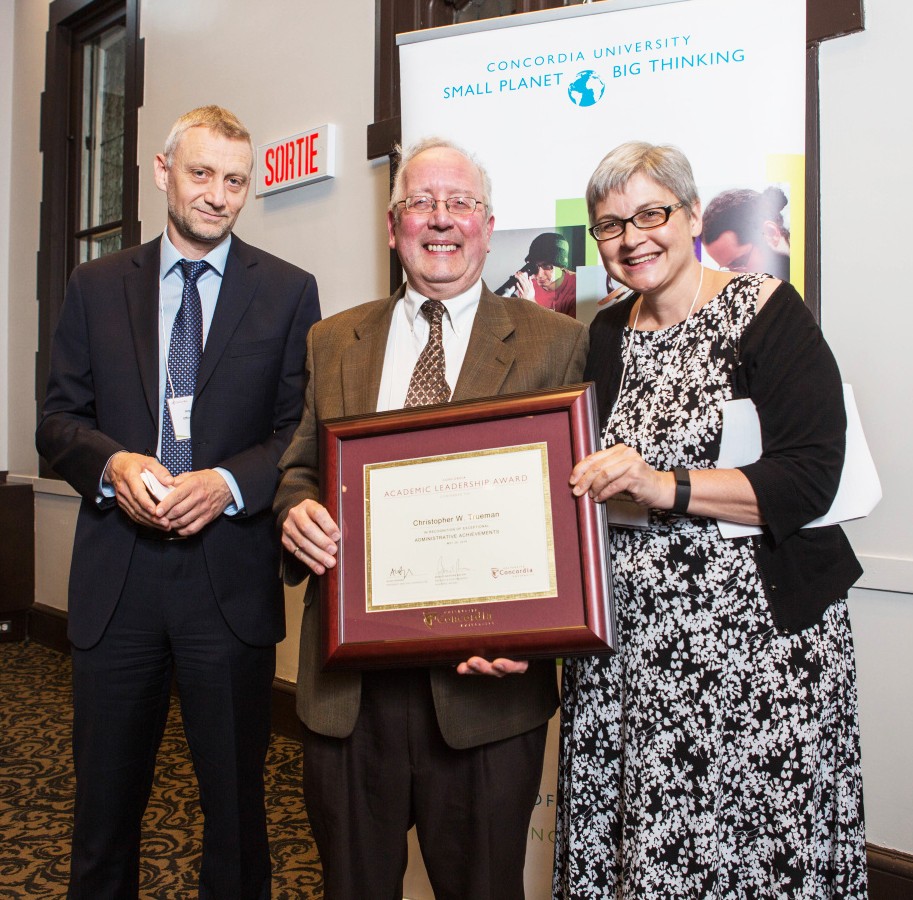 Concordia’s Provost’s Celebration has been held every year since its 2012 inception, in appreciation of the latest members of the Provost’s Circle of Distinction and the Provost’s Fellows Program, as well as the recipient of this year’s Academic Leadership Award.

“I’m very proud of the latest round of inductees and award recipients for important accomplishments over illustrious careers that have also served to shape Concordia into a next-generation university for students, faculty and staff,” said Graham Carr, interim provost and vice-president of Academic Affairs.

At the music-filled celebration held on May 26, Concordians exchanged mutual congratulations leading up to the event's main program. Lisa Ostiguy, deputy provost, congratulated president Alan Shepard for being confirmed for a second term; Graham Carr for taking on the role of interim deputy provost and vice-president of Academic Affairs; and Stéphane Brutus for continuing in his role as interim dean of the John Molson School of Business (JMSB). She also welcomed Daniel Therrien as interim registrar.

The evening proceeded in recognition of 16 remarkable faculty members.

Christopher Trueman, associate dean of Academic Affairs in the Faculty of Engineering and Computer Science and professor in the Department of Electrical and Computer Engineering is the 2016 Academic Leadership Award recipient.

Trueman first joined Concordia as a lecturer. After completing his PhD at McGill University, he came on as a tenured assistant professor in 1979. In 1985, Trueman was promoted to associate professor and subsequently to professor in 2000.

Across his career, Trueman held a number of important leadership roles in areas including research and curriculum development. In his four decades at Concordia, he served as undergraduate program director for the Department of Electrical and Computer Engineering as well as associate chair, where he created a co-operative education program for the department and was its first director.

“Dr. Trueman enjoys enormous respect from his colleagues for his dedication and distinction while serving in many roles and positions both inside the faculty and externally in university committees,” said Amir Asif, dean of Engineering and Computer Science, in his nomination letter.

“He is a role model and has contributed uniquely to the progress of engineering at Concordia University.” 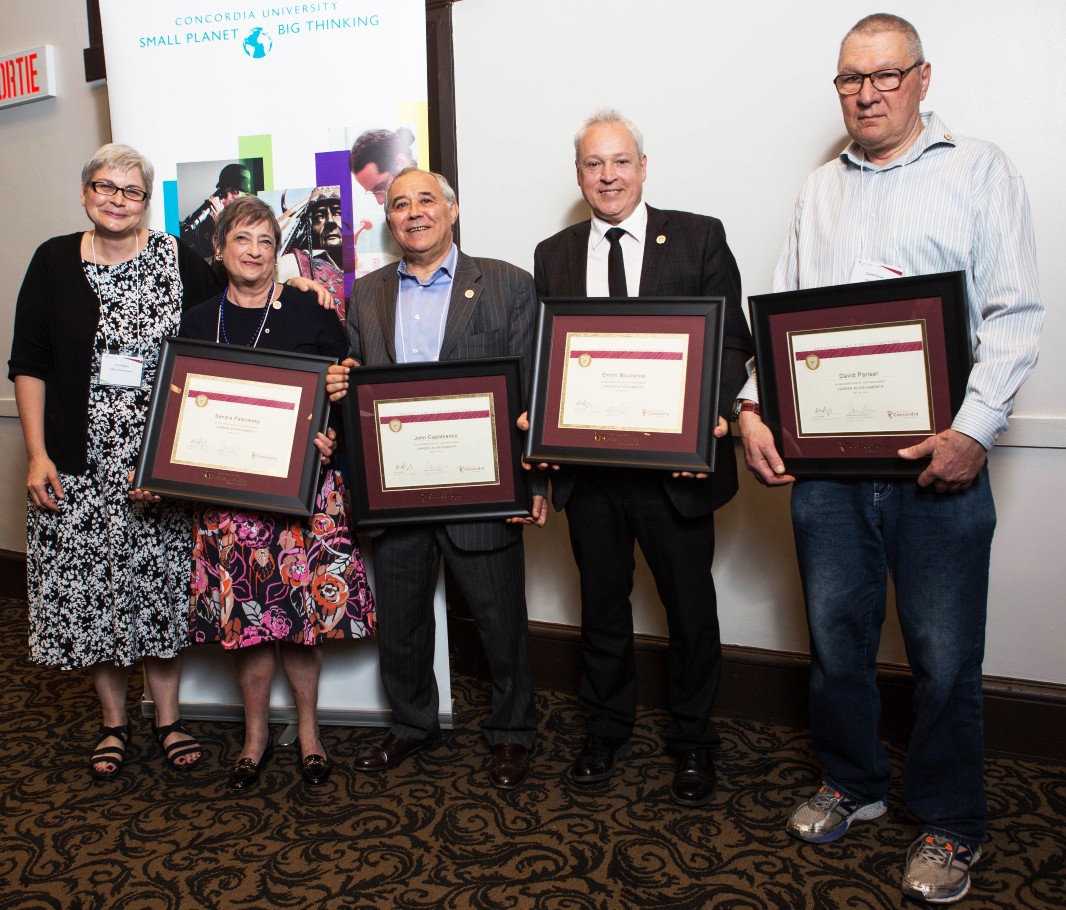 Lisa Ostiguy set the stage for the new members of the Provost’s Circle of Distinction by remarking on the importance of taking pride in the achievements of the faculty and librarians who received notable prizes or awards from external groups or organizations.

Ostiguy was joined by Catherine Bolton, vice-provost of Teaching and Learning, and Jorgen Hansen, vice-provost of Faculty Relations, to present the inductees with pins and certificates in recognition of their exceptional accomplishments.

Emilio Boulianne, associate professor and director of the CPA Research Centre in Accountability in the Department of Accountancy at the John Molson School of Business, holds the Manulife Financial Professorship in Financial Planning.

He is responsible for establishing the designation “Fellow of Chartered Professional Accountant (FCPA)” to recognize those who have provided outstanding service to the profession and whose career and community contributions have brought distinction and honour. Boulianne was named a lifetime member by the Chartered Professional Accountants of Canada, and an FCPA for his exemplary service to business education and the accounting profession.

John Capobianco, a professor and chair of the Department of Chemistry and Biochemistry, is a senior Concordia University Research Chair in Nanoscience and co-director of the Centre for Nanoscience Research. He was recently appointed a fellow of the Royal Society of Chemistry in recognition of his lifetime contribution to chemical research in the lanthanides. Capobianco’s research has brought great visibility to Concordia in the field of luminescent nanomaterials.

Sandra Paikowsky, professor emeritus in the Department of Art History, was appointed a Member of the Order of Canada in recognition of her outstanding contribution to the Canadian art history discipline.

Paikowsky was the first curator and director of the Concordia Art Gallery (now the Leonard and Bina Ellen Art Gallery), the founding editor of the Journal of Canadian Art History and the first distinguished fellow of the Gail and Stephen A. Jarislowsky Institute for Studies in Canadian Art at Concordia.

David Pariser, professor and chair of the Department of Art Education in the Faculty of Fine Arts, was inducted into the American National Art Education Association as a distinguished fellow in March 2016. In 2001, he was named a fellow of the American Psychological Association, Division 10 — Psychology and the Arts, and in 2008, he received the Gaitskell Award for outstanding contributions to Canadian art education from the Canadian Society for Education through Art. 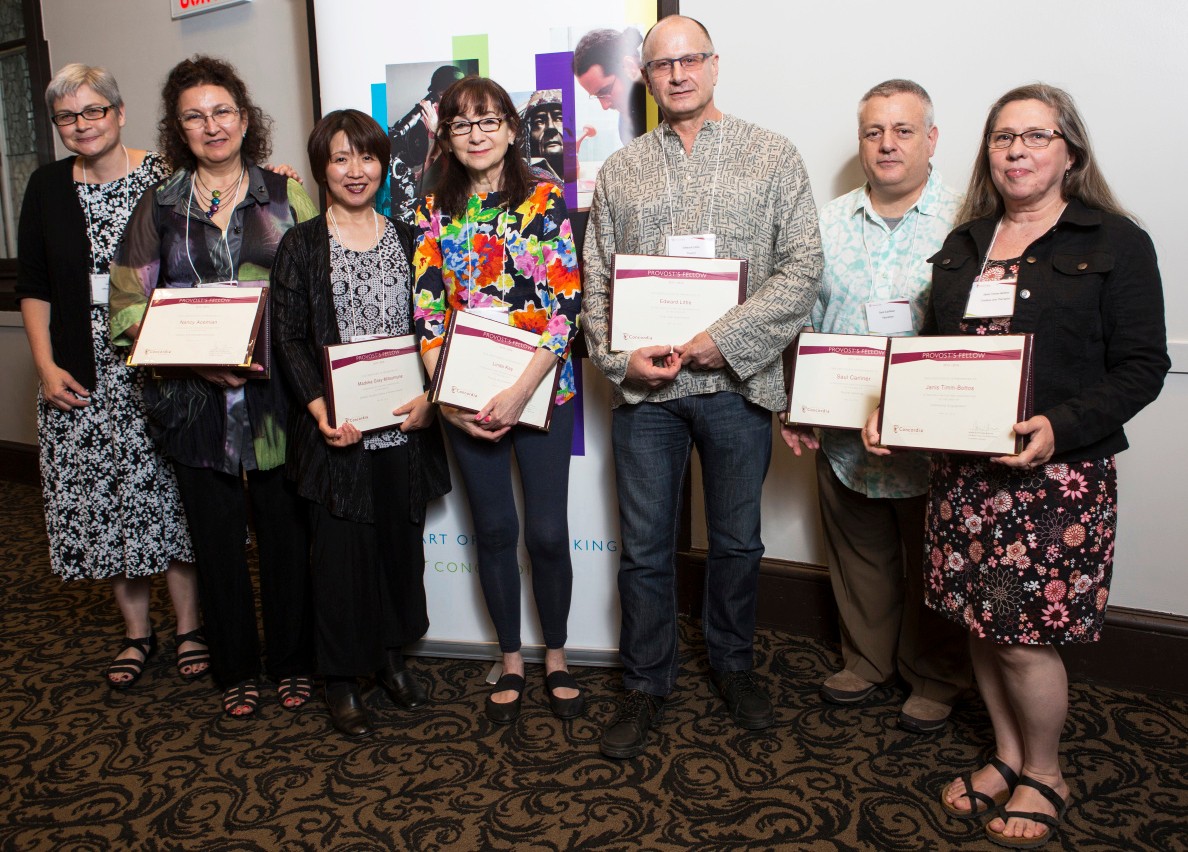 At the celebration, Catherine Bolton presented certificates to the provost fellows in attendance in recognition of their commitment to cross-university initiatives.

The program gives back in many ways, including providing faculty with exposure to institutional leadership.