Sandra Paikowsky is Concordia's newest member of the Order of Canada

The alumna and professor emerita is cited for her contributions to art history
|
Source: University Communications Services

While preparing for a trip to London to see an exhibition of Goya portraits, Sandra Paikowsky got some unexpected news. On December 30, the Concordia professor emerita was appointed as a member to the Order of Canada, alongside notable Canadians such as filmmaker Atom Egoyan, authors Joseph Boyden and Rohinton Mistry and historian Margaret MacMillan. 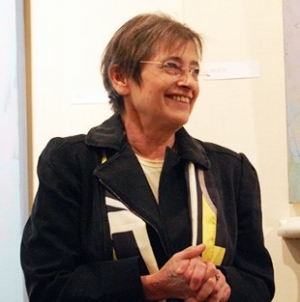 Paikowsky, who received her BA from Sir George Williams University in 1967, was named to the Order of Canada for her contributions to the development of Canadian art history as a discipline.

“It is an absolute thrill to have received the Order of Canada and a complete surprise,” says Paikowsky, who retired in 2010 after 41 years as a faculty member in the Department of Art History. “I’m still in a bit of a shock.”

“At the same time, it's an honour that I want to share with everyone I collaborated with at the Journal of Canadian Art History, the Department of Art History and the Faculty of Fine Arts at Concordia, and the former Concordia Art Gallery, as well as colleagues and friends everywhere,” she adds.

Paikowsky’s contributions to the development of Canadian art history are numerous and ongoing.

“I think the number one thing behind my appointment might be my editing and publishing the Journal of Canadian Art History, which was the first of its kind and continues to be so,” says Paikowsky, who is the first distinguished fellow of the Gail and Stephen A. Jarislowsky Institute for Studies in Canadian Art at Concordia. The institute works to initiate national and international conversations about historical and contemporary forms of Canadian art and visual culture.

Paikowsky co-founded the Journal of Canadian Art History/Annales d'histoire de l'art canadien in 1974. She was the managing editor until 2010 and the publisher until 2012. She remains a member of the journal's editorial board. 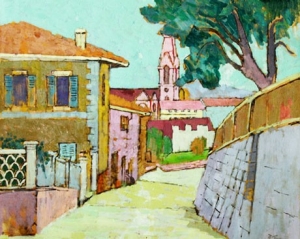 A current project for Paikowsky: the paintings of her late husband, John Fox. | Courtesy of John Fox

One of her early projects for the Gail and Stephen A. Jarislowsky Institute was the presentation of the conference Untold Histories on art in the Maritime provinces held at the Art Gallery of Nova Scotia. She then produced the first history of the Maritime Art Association. The project was sponsored by the institute, where the accompanying research materials are available for consultation.

From 1981 to 1992, she was the director/curator of the Concordia Art Gallery, now the Leonard and Bina Ellen Art Gallery.

“At the gallery, I’m most proud of having exhibitions of modern and contemporary Montreal art, of Canadian artists whose work was not usually seen in Montreal, and that the majority of our shows featured women artists,” says Paikowsky, who designed the new gallery space in collaboration with federal consultants.

Although she’s officially retired, Paikowsky is still busy in her field.

Her main project right now is a book on the paintings and drawings of Venice by James Wilson Morrice from the late 1890s to the first decade of the 20th century.

She’s also working on the paintings and works on paper by her late husband, John Fox, who was an associate professor in Concordia’s Department of Studio Arts.

The investiture ceremonies for new members to the Order of Canada are later this year. Until then, Paikowsky is planning to see an exhibition at Oxford of more than 100 18th-century Venetian drawings, plus paintings by Frank Auerbach and the photographs of Julia Margaret Cameron.

“And anything else I can cram into a short trip to England,” says Paikowsky.

The Order of Canada

Another Concordian appointed to the Order of Canada this year is recent former member of the Board of Governors Marie-José Nadeau. The Order of Canada, one of the country’s highest civilian honours, was established in 1967, during Canada’s centennial year, to recognize outstanding achievement, dedication to the community and service to the nation.

Over the last 45 years, more than 6,000 people from all sectors of society have been invested into the Order. See a full list of 2015 appointees here.