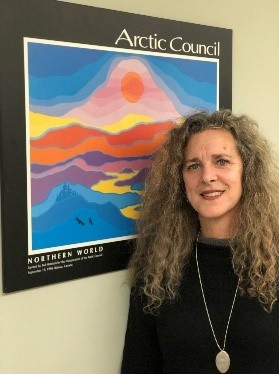 Sarah Cox, the department of Political Science's Public Servant in Residence, has been in the Public Service for 21 years, the last twelve of which have been at the executive level. She has spent the bulk of her career at Crown-Indigenous Relations and Northern Affairs Canada (CIRNAC). Her areas of work have included Education, Inuit Relations, Federal/Provincial /Territorial & Intergovernmental Affairs, the Northern Strategy and International Affairs, to name a few.

Sarah has managed several complex projects, which include negotiating and implementing the delivery of the Common Experience Payment for the Residential Schools settlement and a partnership with The National Film Board which led to the development of a comprehensive collection of Inuit films (Unikkausivut) that was widely distributed across Canada.

She is currently the Director of Circumpolar Affairs at CIRNAC and the Canadian Head of Delegation for the Sustainable Development Working Group (SDWG) in the Arctic Council. She leads or co leads on 11 projects in the SDWG including areas of renewable energy, food security, blue bio economy and mental wellness.

Sarah has been championing students to join the federal public service and continues to invest in this recruitment effort!