It is a landmark document in Concordia’s history — and a roadmap for the university’s future. The President’s Task Force on Anti-Black Racism has released its final report and recommendations.

The launch event was held on October 28. Members of the Concordia community and Montreal’s Black community, special guests, Task Force members and media gathered for this significant announcement.

Takeaways from the final report

Using a critical race lens, the Task Force anchored its report in the four overarching principles of the Scarborough Charter on Anti-Black Racism and Black Inclusion in Canadian Higher Education, which was published in November 2021 and to which Concordia is a signatory. These grounding principles are Black flourishing, inclusive excellence, mutuality and accountability.

While drawing strength from the Scarborough Charter’s assessment of the wider Canadian higher education system, the Task Force report locates its recommendations firmly within the Concordia context.

Reporting to Anne Whitelaw, provost and vice-president, academic, the Task Force was formed in fall 2020 with the mandate of overseeing and coordinating the work required to generate recommendations to address systemic anti-Black racism across university life.

The genesis of the Task Force was in response to global calls to action and the Black Lives Matter movement in the wake of the murder of George Floyd, which brought into focus the growing awareness that all institutions, including Concordia, needed a concerted response to systemic and targeted racism. 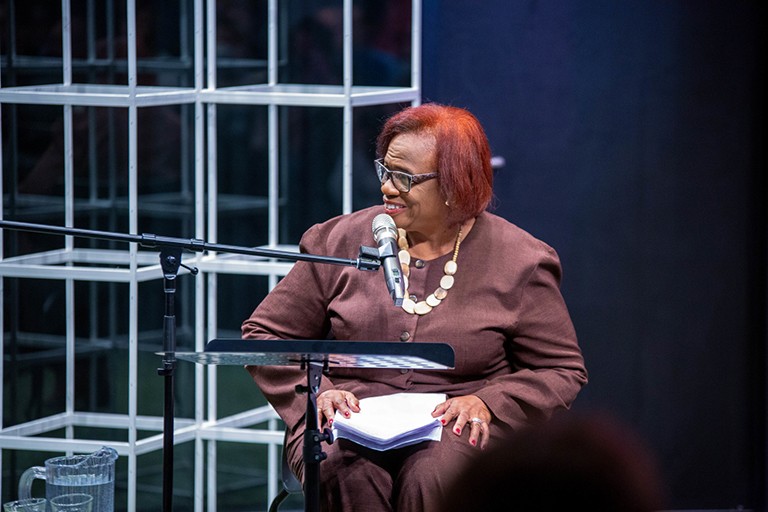 Lynne Murray on the student protest, her arrest and aftermath.

A journey steeped in sadness, joy, moments of frustration and hope

Angélique Willkie, who chaired the Task Force and is special advisor to the provost on Black integration and knowledges, shares her appreciation for the difficult work that led to the final report. She calls for the university to reckon with its past and design a different future.

“The spotlight that we were able to shine on systemic racism across the institution revealed upsetting truths about how Black students, staff and faculty experience and navigate the university’s opportunities, spaces, services and systems of rewards and recognition for their work and scholarship — oftentimes in disparate realities from their fellow students and colleagues,” explains Willkie.

“The insights provided by our Black community members across our six subcommittees formed the basis of our recommendations, whose goals are rooted in leveling the playing field, one that was paved long ago on a bedrock of systemic racism. Our journey drafting the final report was steeped in sadness, joy, moments of frustration and hope that this time will be different — that the profoundly collective and collaborative work of our Black community members will not be in vain,” she says.

“The courage, emotional labour, time and research invested by Black Concordians in this work is a debt that is forever owed to these individuals, as their contributions have been invaluable to Concordia in charting a new way forward and a turning point in its history and relations with Black communities.”

‘The report places our commitment on record and makes us accountable’

Whitelaw worked closely with Willkie, Annick Maugile Flavien and members of the Caucus of Black Concordians and other stakeholders to design the structure and membership of the Task Force.

“Similar to the groundbreaking Indigenous Directions Action Plan, the Task Force report provides a series of concrete actions that will change the university from the inside out as they address the specific experiences of Black Concordians and examine structures and practices that compromise Black flourishing.”

“My gratitude to Angélique and members of the Task Force runs deep. Without the countless hours, tough conversations and willingness to lend their expertise, share their experiences and bear the weight of the emotional labour involved, we would not have a final report and clear path for the university,” says Whitelaw.

“These are complex issues, and we are just at the beginning of a process that requires continuous engagement from all members of the university community. The report places our commitment on record, making us accountable and rendering our effectiveness measurable by mapping out areas that require commitment to action.” 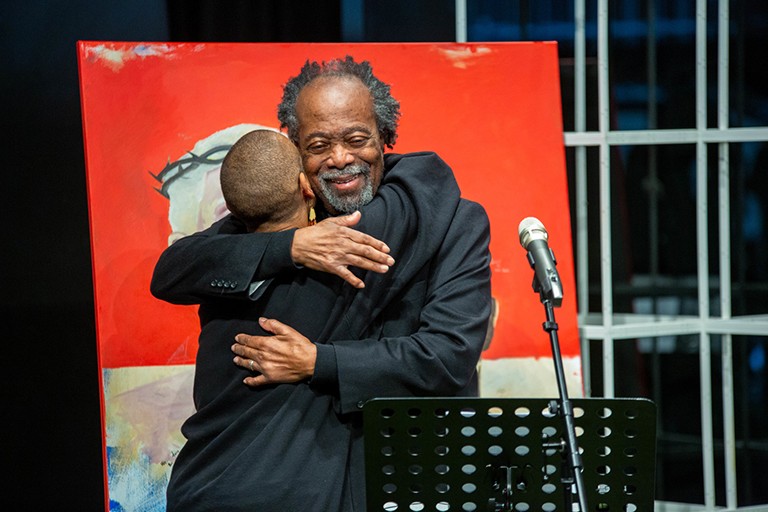 From left: Angélique Willkie with Rodney John who shared his experiences of racism at SGWU.

One of the suggested actions of the Task Force was for Concordia to acknowledge the role of racism in the 1969 student protest at Sir George Williams University and extend a public apology for the university’s handling of these events.

As part of the October 28 launch event, Concordia President Graham Carr offered an apology for the events leading to the student protest and the aftermath, which had dire consequences for the lives of Black and Caribbean students and allies who dared to stand up to the systemic racism experienced at Sir George Williams.

Present at the event were two special guests, Rodney John, who attended Sir George Williams between 1965 and 1969, and Lynne Murray, who was a BA student in 1969. Murray was arrested by police on the morning of February 11, 1969. John was one of the initial six complainants who stepped forward to report racist treatment from his professor. He ultimately returned to Concordia in 1972 and completed a different degree than the one he had started previously.

“For Concordia, reckoning with these events is a long overdue, necessary step,” says Carr.

“But it is not an end in itself. Yes, this public apology reflects our need to question past ideologies and past acts. It also holds us accountable to do better and reflects our commitment to strive every day to be a community where everyone can feel that they belong, where everyone’s experiences are considered legitimate and where, consequently, we can all reach our full potential,” he adds.

“Looking forward, the Task Force on Anti-Black Racism has recommended specific, meaningful actions that will guide us on this path. It has worked over the last two years to generate recommendations anchored in the lived experiences of Black faculty, staff, students and alumni,” Carr notes.

“The measures it has put forward span most aspects of university life. They aim to improve our governance and policies, promote academic excellence and a thriving campus community for Black students, and support Black faculty and staff. Equally, they aim to encourage Black knowledges and nurture mutually beneficial relationships with Black communities beyond the university,” he says.

“Now we begin the hard work of delivering on these recommendations and strengthening our relationships with Black communities, on campus and in Montreal. As you bear witness, we reach out to everyone at Concordia to be partners in building a more equitable and just community.”

What’s next for Concordia

Read the final report of the President’s Task Force on Anti-Black Racism and the President’s apology for the mishandling of the 1969 Sir George Williams student protest.

Read about alumnus Leon Jacobs’s experiences as a Black student in 1969 at Sir George Williams.