Kimberly Burnside, a PhD student in clinical psychology at Concordia, is the study’s principal investigator.

When it comes to detecting autism spectrum disorder (ASD), the earlier, the better.

That’s why researchers at Concordia set out to test one of the theories involved in the complex process of ASD diagnosis and detection.

“Social motivation theory hypothesizes that people with ASD have deficits in social motivation, including social orienting — a preference for human stimuli and social interaction with other humans over inanimate objects,” explains Kimberly Burnside, a PhD student in clinical psychology at Concordia, the study’s principal investigator.

“We’re looking at the flip side and testing the theory to see how social motivation theory occurs in typically developing children between the ages of two and four.”

While the study isn’t designed as an autism detection study, Burnside explains that the goal is to better inform the field of developmental psychology about how typical and atypical cognitive development occurs.

“Downstream, our findings could help target earlier intervention. Further, the age group we selected is when ASD is typically diagnosed because that is the period when children start exhibiting clear symptoms.”

Burnside recently published her results in The Journal of Experimental Child Psychology with co-author Diane Poulin-Dubois, psychology professor in Concordia’s Faculty of Arts and Science and director of The Cognitive and Language Development Lab.

Focusing on the youngest cohort to be studied in this way to date, Burnside wanted to see if social orienting skills present in typical preschoolers predicts a child’s “theory of mind” abilities. Their previous research with children with ASD showed that they display a lack of preference for faces over objects and struggle on a nonverbal theory of mind task. 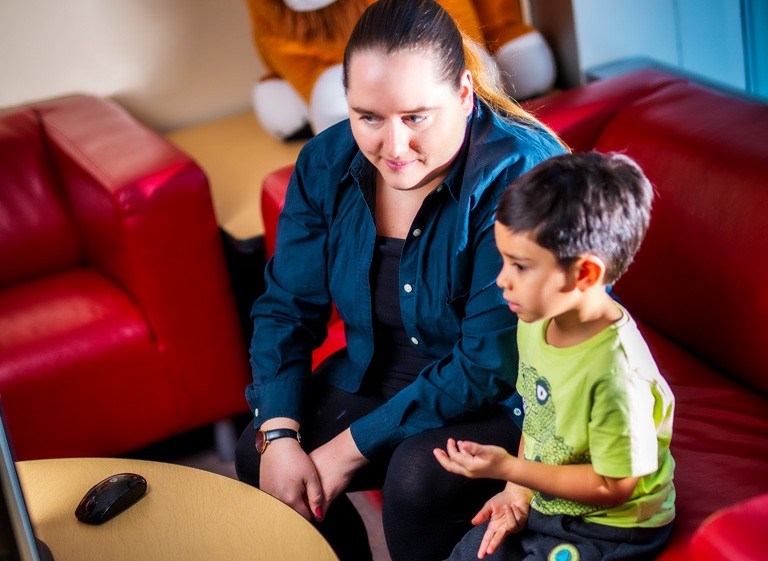 Theory of mind (ToM) is defined as the ability to understand that others have beliefs and thoughts that may be different from our own. It can be tested by administering a false belief task. Classic examples of false belief tasks have participants predict where an observer will search for an object after it was secretly moved.

For example, Sally puts a ball into Box A. Sally is temporarily distracted and Anne moves the ball into Box B without Sally knowing. Someone with theory of mind (ToM) ability understands that Sally thinks the ball is still under Box A — a false belief.

One important concept involved in the study is “social orienting.” It refers to a person’s preference for human stimuli (for example, faces) and social interaction with other humans over inanimate objects or solitary pursuits and distractions.

If a child exhibits strong social orienting preferences, does it predict a child’s capacity for ToM? Turns out, yes, it does. Children who demonstrated a stronger preference for social stimuli were more likely to show better ToM skills.

Burnside administered two social orienting tasks and a ToM task to 34 children between the age of two and four.

“We presented each child with a split screen image on a monitor. On one side of the screen was a human face and the other side was a household object. We measured how long each child looked at the human face compared to another object,” says Burnside. “Next, the split screen showed an array of dots organized as a man walking, versus scrambled dots.”

Participants showed a social preference on both tasks measuring social orienting (i.e. the kids spent more time looking at the human face and the man in motion).

For the ToM test, preschoolers watched a screen as a car owner’s vehicle was moved into a different garage in his absence. Did the preschooler understand that the car owner would think that his vehicle was in the original garage? That’s the test.

Burnside cautions that her findings do not constitute an ASD diagnosis.

“Still, if a child does not pay attention to social stimuli, especially human faces, that could potentially signal a risk for a later diagnosis of ASD,” she concludes.

Funding for the study came from a Discovery Grant for the Natural Sciences and Engineering Research Council of Canada.