How did the animals cross the road? Safely

There are worse ways to make a living than watching critters all day. Just ask April Martinig, MSc (biology) 16, who spent a good amount of her time at Concordia looking at pictures of small mammals around Quebec’s Route 175, which runs between Quebec City and Saguenay. 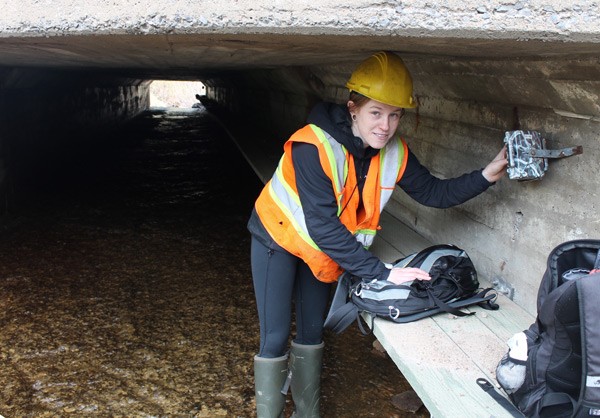 April Martinig's research explored local wildlife's use of tunnels dug by the Quebec Ministère des Transports underneath highways and how to encourage more animals to use them.

The photos are unusual for several reasons. First, they’re shot by infrared motion-sensitive cameras, so shots can be taken in the dark.

And the pictures aren’t meant to be cute, no matter how adorable a marmot can be. They are meant to keep track of how many of the local wildlife use the tunnels the Quebec Ministère des Transports dug underneath the highways, and how to get more animals to use them.

The tunnels are a result of a decade-long widening of Route 175, completed in September 2013, from two lanes to a divided four. However, the extra two lanes created an even larger swathe of asphalt through territory the area’s woodland creatures use for migration and dispersal.

To mitigate their disruption, the ministry ordered the creation of more than a dozen tunnels that would help the animals traverse the highway safely.

Martinig’s job was to see how effective — both in terms of cost and in attracting animal traffic — the tunnels were. Her research was supervised by Jochen Jaeger, associate professor in Concordia’s Department of Geography, Planning and Environment, and André Desrochers, professor at Université Laval.

“We do things to the landscape as people and we expect other animals to adapt to them,” Martinig says. “But if we don’t do anything to help, how are they going to adapt? It’s easy to assume that animal crossings work, but how do we convince the animals to use them?”

The photos captured a menagerie typical of Quebec fauna: mice, voles, marmots, weasels and red squirrels, mostly, but every now and then there would be a fox or raccoon. Once, her cameras even captured a black bear.

By studying the photos, Martinig says she was “looking for something weird or unusual, noting special behaviour, noting what kind of time was spent doing what. When you are doing analysis, you don’t immediately know what’s important.”

One example of something weird or unusual was the image of a mother marmot physically dragging her young through the tunnels, Martinig reports. She describes it as an example of animals teaching each other new behaviour.

When the ministry created the tunnels, the hope and belief was that the animals would use it for habitat connectivity purposes — they would employ the tunnels to roam over their natural range.

Martinig found that animals were indeed using the tunnels but would often stop if there was a median dividing the highway. Many wouldn’t continue their journeys if the tunnel was in more than one closed piece.

“Animals don’t see a tunnel for the same purpose we see it,” Martinig says. “They don’t care what we want.” She says they were using it meet their own daily needs.

It’s worth noting that effects of the Route 175 tunnels on roadkill are being studied, but not by Martinig. “I didn’t look to see if there was an increase or decrease in roadkill, so I don’t know,” she says.

By the time she’d finished her master’s degree, and having studied animal traffic through different-sized tunnels, Martinig concluded in her report to the ministry that animals preferred wide, single-piece tunnels they could see through.

She doesn’t know what, if anything, the ministry will choose to do with her work. For now, Martinig says she is putting fieldwork aside as she continues her studies.

Asked about her career goals, Martinig says, “I want to do something with research, writing and a lot of statistics. I guess that means I’ll try to become a professor!”