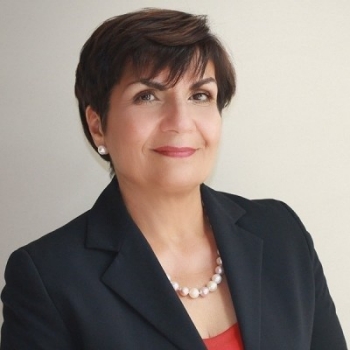 “My hope is that this honour inspires others to generously support post-secondary education and research, one of the most effective ways to encourage positive change for society,” says Gina Cody.

Gina Cody, MEng 81, PhD 89, namesake and historic benefactor of Concordia’s Gina Cody School of Engineering and Computer Science, has been named Outstanding Major Donor for 2022 by the Association of Fundraising Professionals (AFP) Quebec.

The honour, part of AFP’s annual Excellence in Philanthropy Awards, was bestowed on the strength of Cody’s extraordinary $15-million gift to Concordia in 2018 and overall support for science, technology, engineering and mathematics (STEM) education — particularly for women and students from marginalized and underprivileged backgrounds.

“I want to thank AFP Quebec for this tremendous honour,” says Cody. “My hope is that it inspires others to generously support post-secondary education and research, one of the most effective ways to encourage positive change for society.”

The Excellence in Philanthropy Awards celebrate the extraordinary community leadership and commitment of exceptional individuals, businesses and organizations.

Candidates are nominated by non-profit organizations that wish to honour donors, volunteers or employees. Winners are selected by the AFP Quebec’s awards committee as well as a jury comprised of individuals from various sectors of Quebec society.

“This award is a testament to Gina Cody’s remarkable vision, generosity and transformational support of her alma mater,” says Concordia President and Vice-Chancellor Graham Carr. “Her landmark gift inspires young women in STEM. With her support we’ve been able to create new graduate and undergraduate scholarships as well as research chairs designed to attract leaders in emerging technologies to help us address many of this century’s most urgent challenges. The Concordia community takes pride in Gina’s well-deserved honour.”

Gina Cody arrived in Canada from Iran in 1979 to complete a master’s degree in engineering at Concordia. By 1989, she became the first woman to receive a PhD in building engineering from the university.

Cody then spent three decades as president and principal shareholder of a major Canadian engineering firm. Throughout her time in a largely male-dominated field, she provided professional engineering services to some of Canada’s largest REITs, financial institutions, builders and developers.

The Concordia alumna now serves as a mentor to young women in engineering and has received multiple honours for her achievements and work, including the Order of Canada and Ordre de Montréal.

“This award comes as no surprise to those of us who have witnessed Gina Cody’s efforts to innovate in STEM and to make Concordia’s engineering school a Canadian leader,” says Paul Chesser, BA 94, GrDip 97, vice-president of Advancement.

“Throughout her academic and professional career, Gina was often the only woman present in the classroom and the boardroom. She has often remarked that her hope for the future is a world where no field of study or work is divided by gender, ethnicity or wealth — and she has taken a lead role in making that future a reality.”