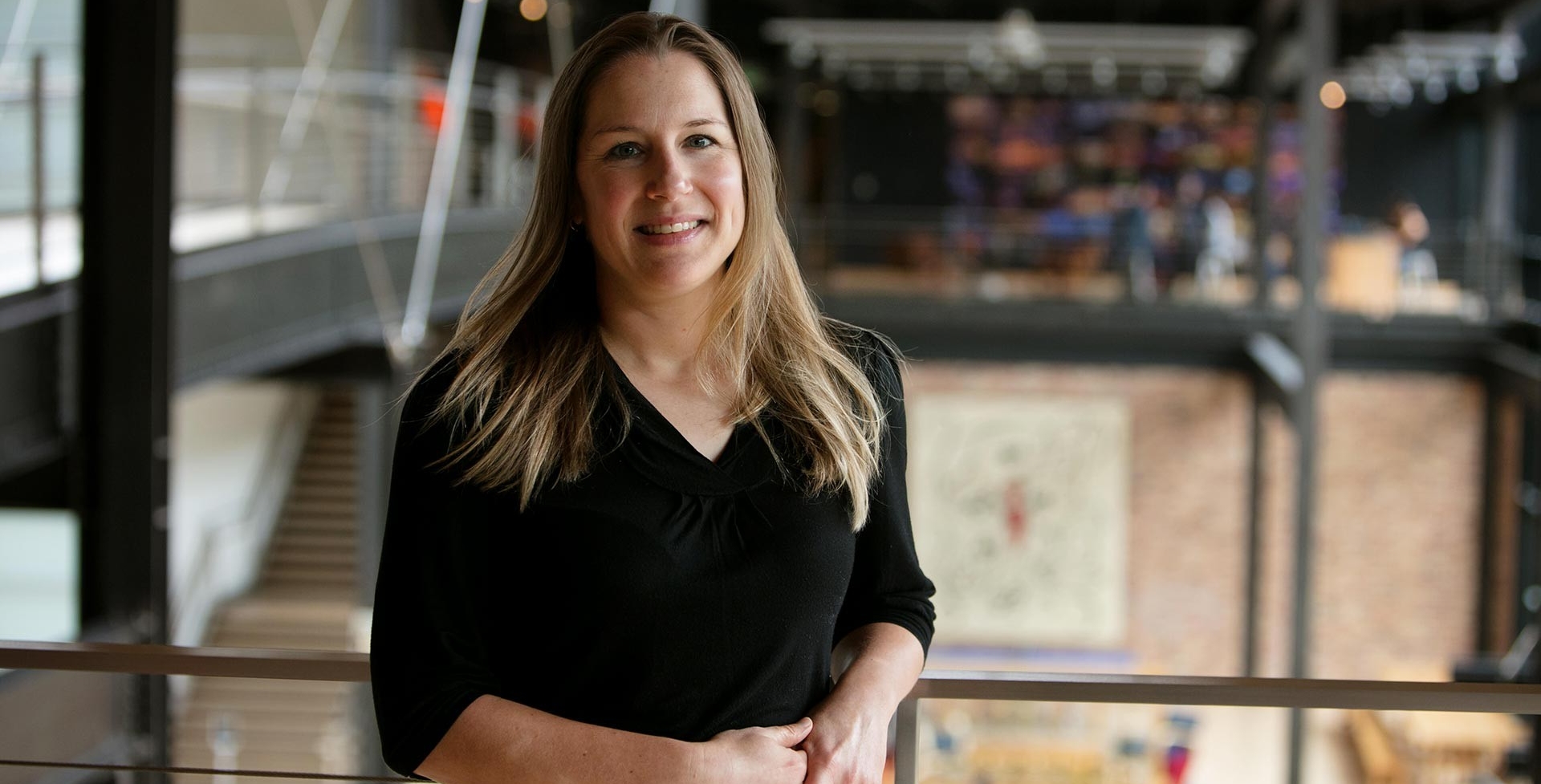 “My love for film just kept growing so I started taking technical classes that were more specific to film animation. Little by little, project by project, I ended up working at Pixar,” says Emilie Goulet, BFA 01.

In addition to changing the course of animated film, Fantasia — originally released by Walt Disney in 1940 to help popularize the character of Mickey Mouse — inspired generations of artists, including Emilie Goulet, BFA (film animation) 01.

Goulet, who currently works as a computer graphics (CG) animator at Pixar in California, sites Fantasia and The Man Who Planted Trees among the her favourite animated movies.

“I still remember the impact those films had on me, in terms of my love for animation, film and storytelling in general.”

This April, the Faculty of Fine Arts alumna was rewarded for her work Pixar’s Soul, the film that follows a jazz pianist aiming to reunite his soul with his body in the afterlife, following a near-death experience. Goulet was part of the team that took home the award for Best Animated Feature at the 93rd Academy Awards. The film also won the Oscar for Best Original Score and topped the Best Animated Feature category at the Golden Globe Awards in February.

“There is always gratitude when a movie you worked on is recognized. Working on Soul was quite special for many different reasons,” says Goulet of Pixar’s first film with a predominantly Black cast.

“The movie was so important for its time and it had such a deep message about the meaning of life, but it also helped me learn something, which is what you want when you work on these projects.”

From video games to the big screen

Goulet began her career in the video game industry as a CG animator in Montreal, where she worked for eight years. It was during that time, between 2002 and 2010 at Behaviour Interactive and EA Montreal, that she developed the deadline-oriented attitude, teamwork and communication skills that helped her succeed in film.

“Despite film and video games being two completely different worlds in terms of narrative arts, I still learned a lot during those years,” she says. “It’s interesting, because I never thought of myself as a gamer or even game savvy, but I really enjoyed learning about that world and exploring it.”

A still from a scene that Goulet animated for the 2020 film, Soul, which recently won Best Animated Feature and Best Original Score at the 2021 Academy Awards. | Photo: Pixar Studios

As an artist, learning and exploration have always been at the heart of Goulet’s pursuits. Before enrolling at Concordia, she studied fine arts — including drawing, painting and sculpture — at Cégep du Vieux Montréal.

“All of the other branches of fine arts were available, but not animation,” says Goulet. “That’s what made Concordia so unique. At the time, it was the only university in Montreal that had a specific film animation program.”

For Goulet, who loved to draw, lived in the suburbs and had never interacted with any other would-be film animators, the program provided a new outlook on life.

“I remember the first day because I was just so hungry to be around people with similar interests,” she says. “It almost felt like group therapy.”

Classes such as Animation I, II and III were among her favourites in the program, as were the life drawing and film history courses.

While studying at Concordia, Goulet also worked as a layout artist at Cinar and CinéGroupe, yet ended up switching to video games before eventually returning to her first love, film. “When I graduated in 2001, 2D — or hand-drawn animation — was collapsing and video games were taking over; that’s where the jobs were,” she explains.

“But my love for film just kept growing so I started taking technical classes that were more specific to film animation. Little by little, project by project, I ended up working at Pixar.”

Following stints at Walt Disney Animation Studios, Reel FX and Sony Pictures Imageworks, among others, Goulet finally joined Pixar in 2016 where she has since worked on major blockbusters including Toy Story 4 and Soul, and now Lightyear, the origin story of the Toy Story character Buzz Lightyear, which is set for release in summer 2022.

Having now lived in the United States for some years, Goulet says that she is grateful for the opportunity to work on movies that reflect culture and impact society in a positive way — similar to the ways her favourite films inspired her years ago. She adds that the recognition for Soul is particularly rewarding.

“This one is special because we all know that there is still so much work to do to honour underrepresented people’s stories. I am happy about the win; it makes me excited to be part of moviemaking."