Get ready for the 2019 Concordia Centraide Campaign 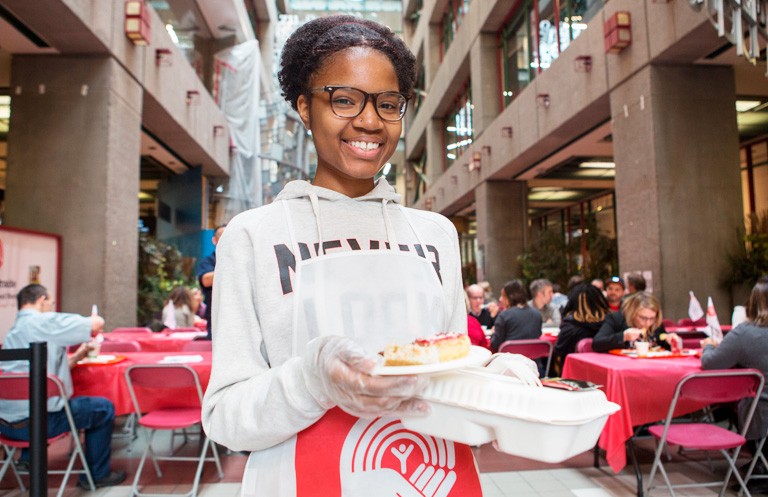 Members of the Concordia community recognize they’re fortunate to study, teach, conduct research and work at a highly ranked institution and employer. They also recognize that many others aren’t so lucky.

Last year, Concordians showed their compassion to those less well off by contributing $164,357 to the Concordia Centraide Campaign. They have a chance to make a difference again, as the 2019 campaign launches October 22.

Funds raised by the campaign, which runs until November 29, go to support Centraide of Greater Montreal. Each year, the organization helps more than half a million people combat poverty, food insecurity, social isolation, school dropout issues and more.

“In 2018, Concordians again proved their awareness that we can’t remain indifferent to the daily struggles facing so many of our fellow Montrealers,” says Philippe Beauregard, Concordia’s chief communications officer and campaign co-chair. “We stepped up in a big way and surpassed our goal by more than $9,000. I’m confident this year we can do even better.”

Once again, the Concordia campaign’s slogan is “Give to Centraide — YUL be glad you did,” a reminder of the charitable organization’s important role in the city.

“On the Island of Montreal, Concordia’s home, Centraide helps more than one in five people,” says Nadia Bhuiyan, vice-provost of partnerships and experiential learning and the other campaign co-chair.

“Centraide also supports 350 local agencies. Their work plays a central role in improving the quality of life for a significant portion of the population of Greater Montreal. Contributing to Centraide meets the university’s strategic direction to embrace the city, embrace the world.”

Donors can make a one-time gift or ask for a payroll deduction, the simplest way to give.

This year the Concordia Centraide Campaign will challenge university community members to increase their pledges and become a leadership donor, which starts at contributions of $1,248 or $48 per pay. The Hewitt Group will match donors’ gifts when they become first-time leaders.

“A leadership gift actually equals $26.06 per pay after tax,” explains Denis Cossette, Concordia’s chief financial officer and Leader Committee co-chair. “That works out to $3.42 per day, or $1.86 per day after tax — less than the proverbial cup of coffee or a regular-fare metro ride.”

As is a Concordia tradition, the campaign will host $15 pasta lunches on the Sir George Williams Campus and the Loyola Campus. And watch out for the always-popular samosa sale November 20 on the lower level of the Engineering, Computer Science and Visual Arts Integrated Complex (EV), near Le Gym.

Raffle tickets will be on sale starting November 6 in the lobby of the Guy-De Maisonneuve Building (GM) from 12 p.m. to 2 p.m.

In addition, the campaign committee encourages area managers to organize their own team events. Those interested can send an email to centraide@concordia.ca.

Learn more about the 2019 Concordia Centraide Campaign and the impact of your donation.

For managers: To organize an event or a visit to your department or unit from a Centraide volunteer who can explain more about the campaign, contact centraide@concordia.ca.