'How do identity and gender shape language?' 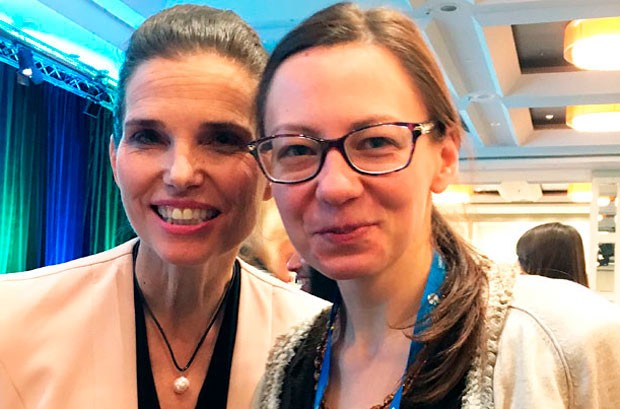 November 6 marked day 1 of Gender Summit 11 in Montreal. It’s the first time the three-day international conference has been hosted in Canada, commemorating the country’s 150th and the city’s 375th anniversaries.

Co-hosted by the Natural Sciences and Engineering Research Council of Canada (NSERC), the event brings together government officials, scholars, activists and industry leaders under the theme of Embracing pluralism and thriving through diversity — shaping science and innovation.

Its overarching goal is to make gender equality in research and innovation the norm.

I signed up for the Gender Summit for two reasons. First, as a linguist, I was curious about how our evolving relationship with social constructs such as identity and gender shape the language we use to talk about these issues.

Secondly, I have been thinking a lot about what defines Concordia as a feminist university. My quest to gain this understanding started when I attended the first ever Queer Homecoming event in September.

There, Kimberley Manning talked about the work that the Simone de Beauvoir Institute does to help position Concordia as a feminist institution. These initiatives include the C-FAR project, hiring Concordia’s first full-time researcher on sexuality and diversity and the tentative launch of a major in sexuality studies.

I decided to dig deeper by accessing the multitude of perspectives represented at the Gender Summit. Over a day packed with wonderful speakers and insights, this is what I learned:

I gained a nuanced understanding of why intersectionality provides a more accurate way of looking at gender and diversity. Panelists who are women scientists, activists and entrepreneurs shared personal stories about overcoming barriers to the advancement of their careers.

An intersectional approach is the key to not looking at various aspects of diversity — such as being a woman, a member of a visible minority or an immigrant — in isolation. It also means acknowledging the often quite different social realities of people who are marginalized.

I reflected on the increasingly important role universities and secondary schools play to ensure that industrial sectors maintain an inclusive workforce. Industry giants represented at the summit showed a genuine desire to ensure equitable practices when it comes to hiring and talent retention.

This is not only right because it is a socially responsible thing to do. Diversity in the workplace also makes economic sense, according to the panelists, as it leads to innovation.

Therefore, industries will look to universities’ diversity and equity policies and outreach efforts when it comes to student recruitment and retention. Only by maintaining equitable practices to recruit and train a diverse student population will universities provide a pool of talented candidates to transition to the workforce.

Indigenous people have sustained their cultures and communities by being attuned to their local ecologies and gathering massive amounts of knowledge about them. Many aspects of their traditional knowledge are still not well incorporated into Western science.

But Indigenous oral history and language are an important source of scientific knowledge. While listening to the Indigenous researchers share their perspectives on gender and identity, it reminded me of my days as a linguistics graduate student.

In the search for inclusivity in the context of scientific inquiry, Indigenous perspectives are important and have to be considered.

Does language shape thought? Do speakers of different languages actually relate differently to such constructs as gender roles, gender identity, equality and femininity?

Inspired by her experiences as an Indigenous person, Karla Jessen Williamson, an assistant professor of educational foundations at the University of Saskatchewan, talked about “genderlessness” as a way of stripping away the limiting binary approach to gender.

Concordia is well-represented at the Gender Summit. I ran into Paula Wood-Adams, dean of Graduate Studies, during the morning coffee break. We talked about the School of Graduate Studies’ initiative to sponsor 10 Concordia graduate students in STEM (science, technology, engineering and mathematics) to attend the summit.

On Day 2, parallel sessions will address diversity in STEM: one will look at the scientific community itself, while the other will tackle diversity-, sex- and gender-based analysis in specific STEM topics. I look forward to hearing the input of my Concordia colleagues and hearing about what they learned!