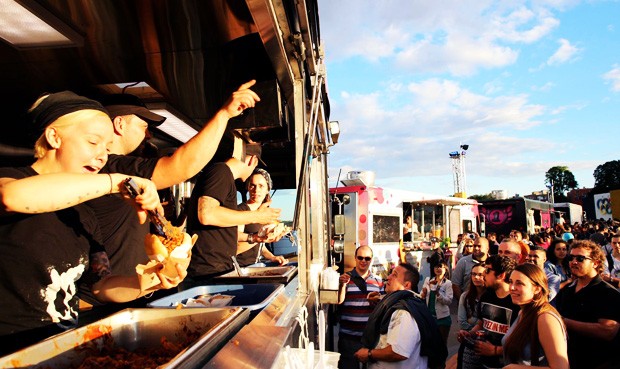 Alan Nash: "Our current scheme misses the mark if we want to achieve some sort of social justice."

2013 was a good year for foodies in Montreal — finally, city hall agreed to allow food trucks into the streets!

Then reality hit home, in the form of an $8-dollar grilled cheese sandwich.

Wait, what? Weren’t food trucks supposed to bring cheap street meat to the masses? And provide jobs to newcomers? Not necessarily, it turns out.

Alan E. Nash, a geography professor in the Faculty of Arts and Science at Concordia, looks at some of the social implications of Montreal’s food truck scene in a book chapter published this month, “Breach, Bridgehead, or Trojan Horse? An Exploration of the Role of Food Trucks in Montreal’s Changing Foodscape.”

You’ll find his essay in Food Trucks, Cultural Identity and Social Justice: From Loncheras to Lobsta Love, a book published this fall by MIT Press and launching on Oct. 30. It’s the 13th in MIT’s Food, Health and the Environment series, this one co-edited by Julian Agyeman, Caitlin Matthews and Hannah Sobel.

“The book was conceived as a debate between people who think food trucks should be used to forward social justice — more entry-level jobs and cheap food — and those who think food trucks should be part of a strategy to promote wider economic development,” says Nash, a fellow of the School of Community and Public Affairs and the Loyola College of Diversity and Sustainability.

After examining the existing literature on food trucks, the popular Montreal press and Yelp reviews, Nash found that the Montreal food truck project promotes high-end gastronomic tourism, in line with the branding of the city as a foodie destination. But it does not help the city in terms of broader social and economic needs.

“This seems a missed opportunity, since other cities have been able to use food trucks as part of local community employment and development hubs,” says Nash.

Originally conceived as a two-year pilot project, the food truck bylaw stuck. The regulations insist that permit holders offer something more creative and original than traditional fast food. The food truck must also be associated with an existing brick-and-mortar restaurant, among other regulations covering, for example, food safety.

That’s fine, he adds, if you want to use them as a tool to support the tourism industry.

“However, our current scheme misses the mark if we want to achieve some sort of social justice with more accessible jobs and meals.”

Either way, Nash notes that food trucks aren’t always environmentally friendly. Food can be sold with plates or utensils that aren’t easily recyclable. Also, driving between parking spots and then idling their engines increases gas consumption.

“Montreal could do better,” he concludes.