SEPT. 30: Show solidarity with survivors by joining a group of Concordians that raised $3,000 for an Indigenous scholarship
|
By Kenneth Gibson 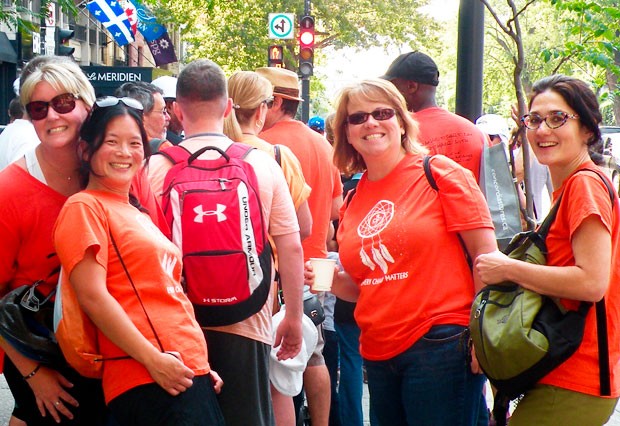 Hilary Rose and other faculty members from the Department of Applied Human Sciences (AHSC) donned orange shirts at Concordia’s Shuffle walkathon earlier this month. Together they raised more than $3,000 for an Indigenous entrance scholarship.

This week, the team members will continue to wear their orange shirts on campus during the lead up to Orange Shirt Day, which falls on September 30 every year. Since 2013, the national event has honoured the survivors of Canada’s residential schools.

Created around the story of Phyllis Webstad, who had her own orange T-shirt confiscated and replaced with a school uniform in 1973, Orange Shirt Day also raises awareness of the intergenerational impact of the residential school system.

From words to action

The department’s participation in Orange Shirt Day began in 2016. Members were looking for ways to highlight the recommendations of the 2015 Final Report of the Truth and Reconciliation Commission of Canada (TRC).

“The TRC is clear about the need for more education about the residential school system. We thought that wearing orange shirts would bring increased visibility to this chapter of Canadian history,” Rose says.

Six AHSC members also decided to wear orange shirts when they shuffled in 2016.

For the 2017 Shuffle, the department learned that they could raise funds for a specific scholarship of their choice. They decided they could do even more to support Orange Shirt Day by dedicating their funds to an Indigenous scholarship.

“As a result of that decision, our team doubled in size and we more than surpassed our fundraising goal,” Rose says.

‘People can educate themselves’

Wearing an orange shirt on September 30 demonstrates solidarity with residential school survivors and their descendants. For Rose, it also provides a teachable moment.

“My focus is on education. People can educate themselves. Even though Canadians were not taught about the 150-year legacy of residential schools in their history classes, there is plenty of information available now.”

She suggests Concordia students read the Final Report of the TRC for themselves. She also points to the many personal memoirs of residential school survivors, such as They Called Me Number One by Bev Sellars.

For Rose and her colleagues, their next step will be to officially set up the Indigenous entrance scholarship with the funds they raised.