‘Drive and passion’: Sandra Gabriele is Concordia’s new vice-provost of Innovation in Teaching and Learning

The researcher and professor will promote interdisciplinarity and curriculum transformation
|
By J. Latimer

Sandra Gabriele will join Concordia’s Office of the Provost on June 19 as vice-provost, Innovation in Teaching and Learning. The new role combines her passion for research and teaching with her drive to support innovative pedagogy. 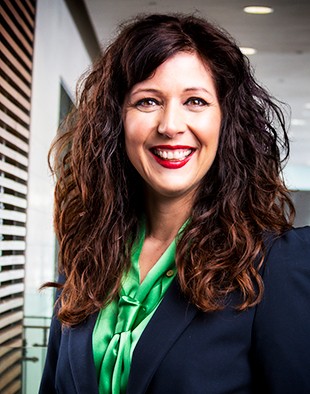 “Sandra has done an outstanding job as chair of the Department of Communication Studies. It’s a high-performing research department that’s also known for embracing technology and creative approaches to pedagogy,” he adds.

“She is a talented educator, researcher and administrator who, in a relatively brief period at Concordia, has made an impact with her deep commitment to her students, her colleagues and the university.”

While chair, Gabriele ushered in an innovative re-mapping of the department’s undergraduate curriculum, began PhD student drop-in sessions with new instructors, and started a process of breaking down classroom barriers by collaborating with the Access Centre for Students with Disabilities.

Coming from a faculty that is already interdisciplinary, Gabriele is accustomed to thinking beyond boundaries. A key project she will oversee involves finding ways to facilitate further interdisciplinarity in program offerings.

“The world’s biggest problems aren’t singular. Solving them will require that we train our students to work together, to think beyond their own disciplinary foundations and to be able to integrate knowledge across disciplines,” says Gabriele, who sees her new role as an opportunity to better connect pedagogies and programs with Concordia’s research strengths.

As vice-provost of Innovation in Teaching and Learning, Gabriele will also aim to facilitate inspired curriculum change that capitalizes on the growing suite of teaching tools available to faculty, responds to the rapidly shifting needs of the society the university serves, and puts the student at the center of all learning experiences.

“I’m passionate about furthering that mission, making sure students become intellectual, cultural and scientific leaders within their discipline, their society and their community,” says Gabriele. “I look forward to this new opportunity.”

As part of her portfolio, Gabriele will oversee the activities of the Centre for Teaching and Learning and work to develop Concordia’s visibility as a producer of top-quality online education through e-Concordia and KnowledgeOne.

Working closely with the faculties, the School of Graduate Studies and Concordia International, she will also take a leadership role in expanding the opportunities for international educational experiences through double degree programs and integrated exchange opportunities that will give Concordia students new skills for a globalized world.

Gabriele obtained her PhD in Communications Studies from Concordia in 2004 after receiving her master’s degree in Women’s Studies from St. Mary’s, Dalhousie, Mount Saint Vincent Universities in Halifax and a bachelor of English Language and Literature from Wilfrid Laurier University in Ontario.

In addition to being department chair, Gabriele has served on Concordia’s Senate, is an active member of the research units TAG and MILIEUX, and sits on the board of directors for the Canadian Journal of Communication.

Gabriele’s own research delves into how forms of news media have evolved in response to changing technologies, from late 19th-century newspapers to contemporary digital games.

Recently, she began a new project in collaboration with the Atwater Library and Jennifer Drummond, coordinator of Concordia’s Sexual Assault Resource Centre. The team is using feminist principles of ethical collaboration to link CEGEP and university students in changing cultural attitudes around sexual violence.

While welcoming Sandra to the provost team, Carr expresses his deep thanks and admiration for the work that Catherine Bolton, outgoing vice-provost of Teaching and Learning, has done for Concordia over the past four years.

“It is difficult to think of a person more devoted to Concordia than Cathy, who is highly respected for her integrity and diligence,” he says.

“Cathy was instrumental in launching the Center for Teaching and Learning. She also spearheaded the Curriculum Innovation Fund, and successfully made the case for the university to recruit three new curriculum developers as a critical first move in delivering on Concordia’s strategic directions.”

When he arrived at the provost’s office, Carr adds, he was astonished at the breadth of the portfolio Bolton led, and wondered how she could accomplish everything she did.

“We’ve since restructured some of the vice-provost mandates to make them more manageable, but it’s a credit to Cathy that she oversaw everything from appraisals to curriculum change, to experiential and e-learning without complaint and while getting things done,” he says.

“I am deeply grateful to Cathy for her stellar service and thank her for assisting Sandra as she transitions into her new position.”

Learn more about Concordia's Centre for Teaching and Learning.