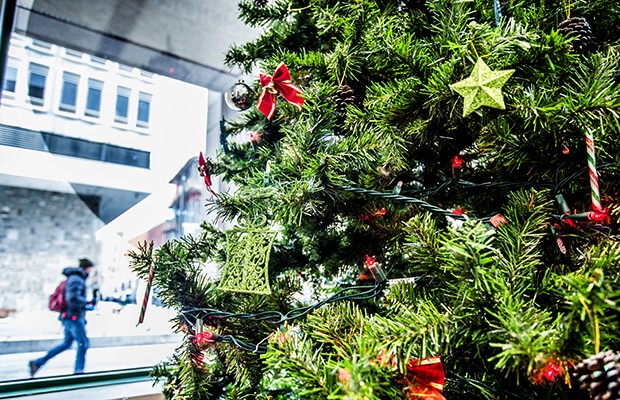 There are many ways Concordians help those in need at the university, in the local community and beyond.

According to Statistics Canada, the total amount of money donated by Canadians to charitable or non-profit organizations increased by 14 per cent to $12.8 billion between 2010 and 2013.

Plenty of Concordians are among those willing to donate both their time and money to charitable causes.

Here’s our rundown of the many great campus efforts on behalf of those less fortunate.

1. Getting Ready for Winter Workshop

As they do every year, the International Students Office (ISO) is collecting warm clothing to hand out at the Getting Ready for Winter Workshop on December 21 at H-620 from 10 to 11:30 a.m.

The Concordia network of four teams and 46 participants raised $14,740 for Movember, an annual campaign in November during which men grow moustaches to raise funds and awareness about men's health issues, including prostate cancer, testicular cancer and mental health problems.

The John Molson School of Business team (JMoSB) alone raised $13,000, more than double what they raised last year. That puts them at number five in the Big Moustache on Campus Canada competition among national universities. And the donations keep rolling in…

3. Taste of a Good Cause

For the fourth year running, Hospitality Concordia hosted the Taste of a Good Cause event on October 27, where eight of the university's approved caterers sold samples of their wares.

It was a fun opportunity for Concordians to try out some of what’s available. The $1,822.00 raised will go toward the Student Emergency and Food Fund, which provides food vouchers and emergency funds to students who need it — and more than 181 community members attended.

The fund, which is run by the  Multi-faith and Spirituality Centre, also benefits from the Tie-a-Wish-on-the-Tree campaign. The slogan says it all: “Make a wish. Make a donation. Make a difference in a student’s life.”

For one week every December, volunteers accept donations for people to write a wish on a tag to decorate a tree in the atrium of the Engineering, Computer Science and Visual Arts Integrated Complex (EV). Last year, they raised $500 for hungry students. It runs until December 9, 2017.

4. Carollers with a Cause

The carollers have also been supporting the fund by performing lunchtime concerts and spreading holiday cheer across the Sir George Williams Campus.

Why not finish your gift shopping at the 27th annual Library Christmas Auction? It's on December 8, when an excited crowd will bid on all kinds of crafts, antiques, jewellery, objets d'art, and holiday-themed items.

Let’s not forget about the donated Habs hockey stick, signed by the 2015-2016 team. There will be a $10 lunch with a choice of chilli, lasagne, bean salad and more.

Brent Pearce and his undergraduate marketing students are helping the less fortunate through their 16th Christmas 4 A Cause, a charity that accepts donations of non-perishable food, toys, games, books, clothes and money (made payable to “Saint Thomas More Parish Christmas Fund”).

For 2016, they are providing for 150 families and more than 400 kids, who receive food baskets, toys, pajamas and other gifts.

If you missed the Monday, December 5 fundraiser at Hurley's Irish Pub, donations are being accepted on the 13th floor of the John Molson Building (MB), to the attention of Brent Pearce, until December 17. For more information, visit their Facebook page.

It was a dazzling success, with 500 presents wrapped, more than $350 collected and dozens of boxes of non-perishables and gifts from more than 35 kid-pleasing sponsors.

The Community Campaign, Concordia’s annual internal fundraising appeal, is a great way for faculty and staff to support Concordia and its students this holiday season. Everyone is encouraged to give to the area that is most meaningful to them.

Whether you donate to our libraries, athletics programs, faculties, departments or scholarships and bursaries, students will benefit directly from your generosity. Find out more about the campaign.

Again this year, during the Stingers Holiday Skating Party on Saturday, December 10, from 2 to 4 p.m., Concordia athletes, faculty and staff are collecting non-perishable food donations at the door.

Bundle up the kids and pull on your skates at the Ed Meagher Arena to glide around with Santa Claus, and Stingers from many teams. Admission is free. There will be complimentary face painting, hot chocolate, candy canes and cookies — and all food donations go to the NDG Food Depot.

Clients of Concordia Stores got a $30 discount off a Jansport backpack when they donated their old backpack to the Goods Bazaar, a Concordia University Student Parents (CUSP) program.

The money raised goes to Centraide of Greater Montreal, an umbrella organization that distributes funds to 349 community agencies in the region.

Financial Services have already surpassed their 2015 fundraising total of $400 in raffle tickets and cash donations, while their annual food drive continues to thrive. This inter-department initiative also collects boxes of non-perishable food items and toiletries for Chez Doris.

"We’re doing a raffle again at our holiday event to provide a monetary gift as well," says Catherine Bissonnette-Wilkinson, an analyst with Financial Services. "It's wonderful to hear all the events that are going on in the Concordia community that are helping assist the greater community!"

14. JMSB and CTV Spirit of Giving

Every year CTV Montreal partners with 10 different charities that do important work to support the most vulnerable communities in Montreal.

This year, the John Molson School of Business is a proud supporter of the CTV Spirit of Giving campaign. Donations of food (non-perishable items), toys and other useful items are graciously accepted. For further information, please e-mail Eva @ Eva.Ferrara@concordia.ca.

Do you know of other charitable events on campus? Please tell us about them by writing to now@concordia.ca.