‘Scholars need to speak up’

Events such as the 2014 terror attacks in Ottawa and Saint-Jean-sur-Richelieu, as well as the radicalization of Montreal CEGEP students who joined jihadist groups in Syria, are ringing alarm bells about increasing extremism in Canada.

Much analysis of this phenomenon looks at the socio-economic, cultural or psychological reasons why young people in particular are susceptible. 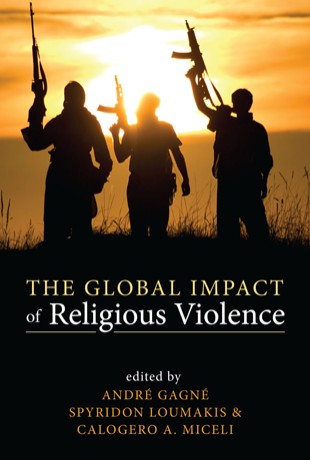 But what role does religious thinking play?

This question is the central theme of The Global Impact of Religious Violence (Wipf and Stock, 2016), a new book of essays co-edited by André Gagné, associate professor in the Department of Theological Studies in the Faculty of Arts and Science, and PhD candidates Spyridon Loumakis and Calogero Miceli.

The collection includes contributions from eight Concordia graduate students from various departments such as Religion, Theological Studies, Psychology and English.

We sat down with Gagné to try to unpack the thorny issue of religion and violent extremism.

André Gagné: It is the direct result of a conference on the topic held at Concordia back in 2015. We invited Iowa State University professor Hector Avalos, an expert on religious violence who is also one of the book’s contributors. With acts of extremism rising in the world we felt it necessary to engage with this topic.

When a violent attack occurs, news agencies normally interview government officials, sociologists or political analysts. Rarely do we hear from people specializing in religion or theological studies. But we should, because those who perpetrate these atrocities use religious rhetoric to legitimize their actions. Certainly disenfranchisement, poverty and marginalization play a role, but there is definitely also a religious angle that needs to be explored.

Why do you think religion has been largely absent from the dialogue concerning radicalization?

What we try to show in the book is that religion has a lot of different manifestations. Whether it’s the Bible or the Qur’an, there are many good aspects, such as the practice of certain ethical precepts. However, in these same texts there are darker sides, where God commands the extermination of enemies, for example.

Many religious groups manage to not read these texts literally and understand them from another perspective or context. But there are groups that refuse to interpret them symbolically and instead take them word for word.

Salafists are a minority — a sub-group — of Islam which we cannot completely disassociate from the religion itself. Even within salafism there are sub-groups — some more peaceful than others — which all claim to represent Islam. It’s the same thing when it comes to Christian fundamentalists. We wouldn’t say they are not Christians, but they in no way represent all of Christianity.

Is there a common thread that links religious extremism around the world?

AG: The thread is the way we define religion. It is a way of life and thought that presupposes the existence of and relationship with unverifiable forces and beings. When an unempirical entity whose existence cannot be verified commands someone to act violently then this becomes an ethical problem. This is why scholars need to speak up.

In the essay that you contribute to the book, you talk about the tyranny of political correctness when it comes to talking about religion and extremism. What do you mean by this?

AG: We really cannot put everybody in the same basket. In the case of Islam, it is clear that most Muslims are not violent. This is why people are sometimes afraid that Muslims will be marginalized when Islam is mentioned in the context of violence.

We hear things like “ISIS has nothing to do with Islam.” But at the same time, ISIS justifies its own violent actions by de-contextualizing passages from the Qur’an or from the life of Muhammad.

Who are we to say from the outside that this has nothing to do with religion, when those committing violent acts tell us it does? Isn’t it some sort of intellectual colonialism when we attribute motivations to others that are contrary to what they are telling us?

How can examining religion in the context of extremism help to reduce radicalization?

AG: It all comes down to education. We need to specifically teach what is meant by religious extremism and how it can sometimes lead to violence, and not make generalizations.

I think this starts in high school. Young people need to be religiously literate — not through faith-based literacy, but by acquiring a better understanding of religious beliefs and practices from a historical and comparative perspective. We think that religion is this archaic thing but it’s always going to be there. Therefore, our goal should be to educate and develop critical thinking in relation to all religious traditions.

A book launch for The Global Impact of Religious Violence will take place at the Montreal Institute for Genocide and Human Rights Studies on Wednesday, November 30 from 12 to 1:30 p.m. in FB-804, Faubourg Building, 1250 Guy Street.