Supported by Centraide, the non-profit provides free health and legal clinics, counselling and other services for Montreal youth
|
By J. Latimer 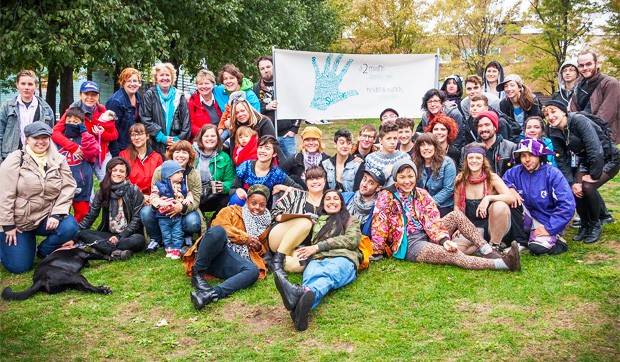 When front desk volunteer Michael Dorado (BA 16) works a shift at Head & Hands, a non-profit organization committed to the physical and mental health of Montreal’s youth, he sees himself as a first responder.

“We’re on the front line, providing information and access to services — and what we offer is all free,” says the recent graduate from Concordia’s Human Environment program.

Dorado developed his passion for mental health advocacy while serving on the executive of Jack.org Concordia, the university’s chapter of a national network of concerned young leaders lobbying for more public awareness and support on the issue.

After graduating this summer, Dorado began volunteering at Head & Hands — just one of the 349 agencies and projects that benefit from the Centraide of Greater Montreal campaign, which raised $54.3 million in 2015.

Only one year old at the time, Concordia was a part of it. More than four decades later, the Concordia United Way/Centraide Campaign is still thriving. It raised $187,174 in 2015 — 98.5 per cent of its goal.

“It’s 15 to 20 per cent of our budget, so it’s a key relationship. Plus, that money is core funding, so it’s not earmarked for a specific program, meaning that it goes wherever we have the greatest need,” says Clarke, currently a part-time MBA student at Concordia’s John Molson School of Business.

Laura MacDonald, volunteer and board president for Head & Heads, explains how rare it is for a non-profit to get core funding. “Donors mostly want to fund projects — not what they think of as ‘overhead.’ That core funding lets us do our thing, running programs and coordinating all the volunteers,” says MacDonald, another alumna with two degrees from Concordia (BFA 03; BComm 16).

As a community organization committed to helping 12 to 25-year-olds in Montreal, Head & Hands takes a harm-reductive, holistic and non-judgmental approach. They currently have 25 employees, 13 of whom are full time, serving just under 7,000 clients. The services, all free, include a health and legal clinic, individual and family counselling, a street work program, a young parents program, tutoring, an emergency food pantry and more.

Rhonda Buckland has worked there as a full-time social counsellor for 15 years. She has also been a part-time lecturer at Concordia in Applied Human Sciences and Human Relations for 18 years, teaching courses in family communications and program planning and design.

“We see many student clients at Head & Hands for a wide range of issues,” says Buckland (Cert. 94, BA 97, MA 03). “They can be experiencing anxiety or depression. They can be in a relationship crisis. They can be in a career crisis. The main thing is that we don’t give advice. We listen and help students sort through it.”

Clarke points out that Concordia and Head & Hands have a close relationship, as well as a history of collaboration.

“Concordia and Head & Hands work together at all different levels: we speak at Cinema Politica Concordia screenings, we work with Concordia students for our peer-based sex-ed program, The Sense Project, we rent from Sustainable Concordia’s Dish Project and we work with the Centre for Gender Advocacy to amplify each other’s messages and support each other’s events.”