‘Stay positive, regardless of your limitations’ 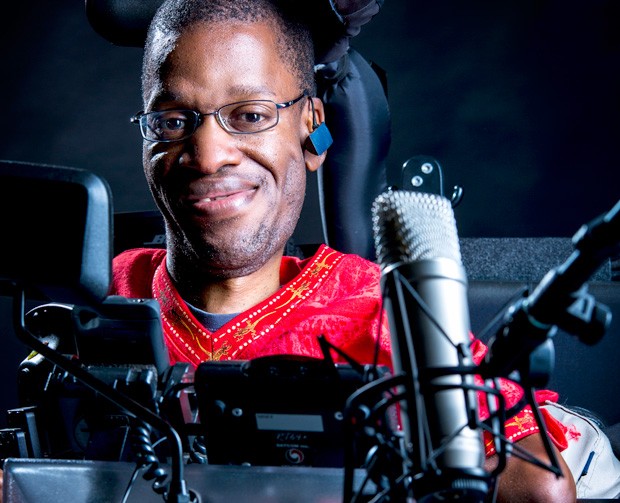 “I want to tell the personal story of my life through music,” says Paul Tshuma, winner of the 2016 O’Brien Medal.

Stevie Wonder, Lionel Richie, Bobby McFerrin — these are Concordia student Paul Tshuma’s most important musical inspirations. Their songs are on his smart phone, where “You are the sunshine of my life” gets frequent play.

“Stevie Wonder is my role model because he doesn’t let his disability limit him,” says Paul, 37, who was diagnosed with muscular dystrophy at birth.

Not only is Paul, a gospel singer, graduating from Concordia this June with a BA in Music Studies, but he also won the O’Brien Medal.

In honour of J.W. O'Brien, the medal is awarded upon graduation to the undergraduate student whose efforts and dedication best exemplify the values of Concordia within the larger external community.

Even though it’s complicated for Paul to get around town, having to schedule rides with adapted transit, he co-founded the United Tribulation Choir in 2007 with his younger brother, Gift.

“There are 22 choir members now, including the musicians, and we practice every Thursday night. We play gospel, rhythm and blues, and African, with a bit of rock and jazz,” says Paul.

“He’s really compassionate and laid back, but when he leads rehearsals, he’s focused. His brother Gift also takes the lead sometimes. They’re both incredibly devoted,” says Paradis, a saxophone player graduating in December.

Say it in song

Paul started singing at the age of three. Both he and Gift were born with muscular dystrophy in Zimbabwe but moved to Montreal with their mother when Paul was 22.

“I realized that many people are depressed, so I want to tell the personal story of my life, through music," he says. "It’s the story of how to stay positive, regardless of your limitations."

Gary Schwartz, a part-time lecturer in the Department of Music, taught Paul's first music class at Concordia. It was an elective called “Music for Non-musicians” at the Loyola Campus. Later, Paul took Schwartz’s improvisation and performance classes.

Schwartz says Paul showed exemplary commitment to his music studies. “He’s super responsible. He always knew the tunes for rehearsal and he always attended concerts — despite his mobility issues.”

It's no surprise to Schwartz that his former student has earned one of the highest accolades awarded at graduation.

“Paul doesn’t put himself in situations that are geared down for him and he never uses his muscular dystrophy as an excuse to get out of doing things. It’s very inspiring to be in the same room with him.”

For his part, Paul praises Concordia for having a real community spirit and being a place where he always feels included.

“There are a lot of services on campus available for students with disabilities. I use them, like note takers, electronic books and caregivers. They’re easily accessible and the Department of Music is ready to help in any way. I’m recognized as a person, not a number.”

As he worked to improve his vocal skills, Paul discovered that the breathing techniques involved helped him to exercise his lungs. The therapeutic benefits are just another reason he's determined to continue pursuing his passion, no matter where he ends up next.

“Singing has kept me really strong,” says Tshuma. “If I can’t get a job in my field, I’ll do music on the side. That’s okay until something full-time opens up.”

Music student and choir founder Paul Tshuma will be honoured with the O’Brien Medal during the Fine Arts 2016 Concordia convocation ceremonies on Wednesday, June 8 at 7:30pm at Place des Arts.