Want a younger brain? Stay in school — and take the stairs 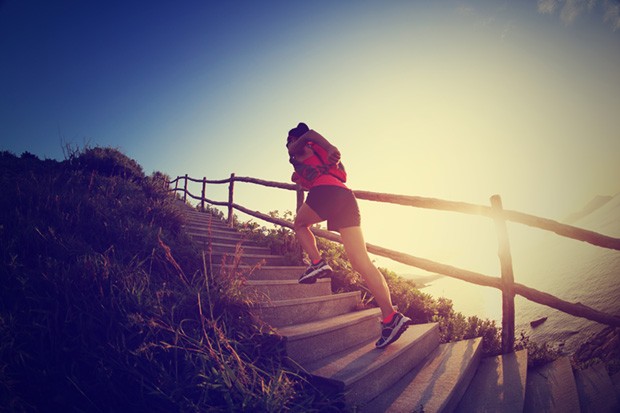 Taking the stairs is normally associated with keeping your body strong and healthy. But new research shows that it improves your brain’s health too — and that education also has a positive effect.

In a study recently published in the journal Neurobiology of Aging, researchers led by Jason Steffener, a scientist at Concordia’s PERFORM Centre, show that the more flights of stairs a person climbs, and the more years of school a person completes, the “younger” their brain physically appears.

The researchers found that brain age decreases by 0.95 years for each year of education, and by 0.58 years for every daily flight of stairs climbed — i.e., the stairs between two consecutive floors in a building.

“There already exist many ‘Take the stairs’ campaigns in office environments and public transportation centres,” says Steffener. “This study shows that these campaigns should also be expanded for older adults, so that they can work to keep their brains young.”

For the study, Steffener and his co-authors used magnetic resonance imaging (MRI) to non-invasively examine the brains of 331 healthy adults who ranged in age from 19 to 79.

They measured the volume of grey matter found in participants’ brains because its decline, caused by neural shrinkage and neuronal loss, is a very visible part of the chronological aging process. Then, they compared brain volume to the participants’ reported number of flights of stairs climbed, and years of schooling completed.

Results were clear: the more flights of stairs climbed, and the more years of schooling completed, the younger the brain.

“This study shows that education and physical activity affect the difference between a physiological prediction of age and chronological age, and that people can actively do something to help their brains stay young,” he says.

“This is encouraging because it demonstrates that a simple thing like climbing stairs has great potential as an intervention tool to promote brain health.”

Partners in research: This research was supported by grants from the National Institute on Aging. The study's co-authors are Christian Habeck, Qolamreza Razlighi and Yaakov Stern (Columbia University); Deirdre O’Shea (Columbia and the University of Florida); and Louis Bherer (Concordia University and Institut universitaire de gériatrie de Montréal).