What can universities do to support Indigenous resurgence? 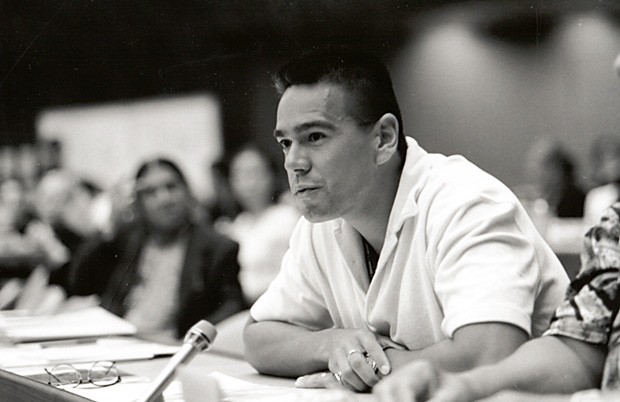 Taiaiake Alfred is an expert in Indigenous governance and resurgence. | Photo courtesy of Nuxalk Radio

On April 22, Gerald Taiaiake Alfred tackles the issue of Indigenous resurgence when he comes to Concordia for the Strategic Directions speaker series, The Future of the University and the Future of Learning.

“Indigenous resurgence has arisen out of the need to look at the effects of Indigenous people being dispossessed from their land and being unable to practise their language, spirituality and culture in relation to the land,” says Alfred, the author of Peace, Power, Righteousness: an Indigenous Manifesto (1999, 2009), Wasáse: Indigenous Pathways of Action and Freedom (2005) and Heeding the Voices of Our Ancestors: Kahnawake Mohawk Politics and the Rise of Native Nationalism (1995).

This grassroots movement focuses on putting Indigenous people back on their land, giving them access to cultural practices on a traditional basis. “This land-based approach is more in tune with environmental ethics that comes from Indigenous practices and focuses on learning and healing,” he says.

“In advancing the agenda for Indigenous resurgence, we are going against the mainstream of First Nations activism and politics that see economic development as the main mechanism to deal with the harm done to Indigenous people,” says Alfred.

While these are important, the more vital issue is addressing cultural dislocation of Indigenous peoples. When asked how universities can support this movement, Alfred says there is no requirement for large capital investments or funding — what is required is a paradigm shift.

“All it takes is a shift to supporting Indigenous people on a different agenda, to be flexible and open to different types of arrangements and knowledge, plus a willingness of faculty to break out of modes of thinking in how to approach Indigenous research,” he says.

What does require funding, however, is hiring Native faculty at a senior level. “You need Aboriginal leaders at a senior level to bring their established connections, so students can take advantage of their deep connections with the community,” says Alfred.

He insists that Concordia is well-suited to participate in the movement because of its culture and reputation, and because it is responsive to the lived reality of the communities it serves.

“The new generation of Indigenous people who want to create a movement to allow them to re-culture themselves, and create a different experience; create a psychic shift that is possible at Concordia, because of its openness and its adaptability compared to other institutions,” he says.

Alfred was born in Quebec in 1964 and raised in the Kahnawake Mohawk Nation. He earned his BA in history from Concordia University and his MA and PhD in political theory from Cornell University.

On Tuesday, April 28, Michael Crow, president of Arizona State University, will deliver the presentation “How do we design the university that we want and need?” via a video conference from 11 a.m. to 12 p.m. in Room EV 1.615 of the Computer Science, Engineering and Visual Arts Integrated Complex (1515 Ste. Catherine St. W.) on the Sir George Williams Campus.