How Concordia became a leader in green building

From the Hall Building escalators to stacked atria and solar walls, here’s an intimate look at the evolution of eco-innovation
|
By Tom Peacock 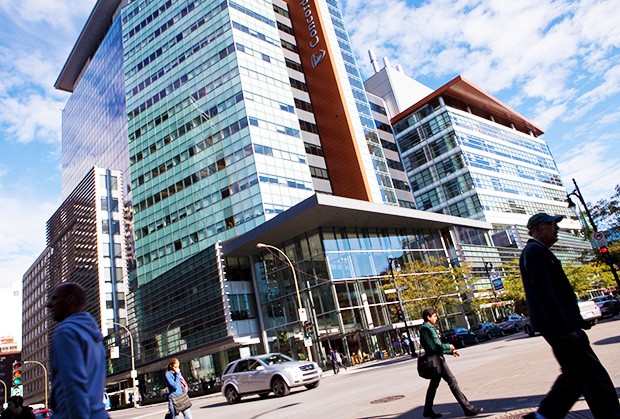 “We get leading-edge technology whenever we can, and update our standards whenever we try something new,” says Daniel Gauthier. | All photos by Concordia University

The problem is, most of the newest buildings are so well constructed there isn’t much to do. “There are a lot of different projects going on around the university, but they're mostly in the older buildings,” he says. "We've put the bar so high that it's difficult to beat."

For the last 17 years, Concordia has led the way for Quebec’s six largest universities. The most recent statistics compiled by the Ministère de l’Enseignement supérieur, de la Recherche, de la Science et de la Technologie show that the university consumed 1.05 gigajoules per square metre in 2012-2013, which is significantly less than McGill University (1.75) or the Université de Montréal (1.47).

Gauthier attributes these numbers to Concordia’s increasingly rigorous green building standards and to the close monitoring of building and renovation projects.

“We get leading-edge technology whenever we can, and update our standards whenever we try something new,” he says. 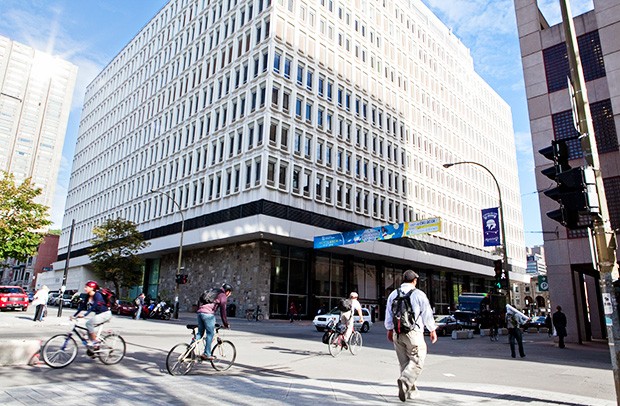 The fine art of retrofitting

The Henry F. Hall Building (H) — perhaps the most familiar Sir George Williams Campus landmark — is one Concordia construction that has seen significant upgrades in the past half-century.

As the first university high-rise in Canada, it was considered a marvel of modern architecture on its opening day in October 1966. The ribbon cutting took place on the same day as the inauguration of the Metro, and more than 5,000 Montrealers stopped by to explore the 800,000-square-foot building connected by high-speed escalators.

A few years earlier, in 1961, the Drummond Science Complex had ushered in the modern era on the Loyola Campus: its molecule shape was a radical departure from the classical Jesuit-college aesthetic. But both the Drummond Science Complex and the Hall Building were built long before green design was a trend, and Leadership in Energy and Environmental Design (LEED) — the international sustainable-construction rating system — became the gold standard.

The Hall Building stepped into the 21st century in 2006 with an award-winning $4 million overhaul. Energy-efficient upgrades ultimately save Concordia $400,000 a year in operating costs.

“We used to have heating, cooling and lighting systems that turned off at night and on the weekend,” said Yves Gilbert, the university’s former director of Engineering and Building Performance. “Now, by having more variable controls, we can shut them off when there is no motion in the area.”

It was also the greenest Concordia building to date. The complex earned recognition from Natural Resources Canada for its energy-efficient design.

Meanwhile, in the great tradition of “reduce, reuse, recycle,” Drummond was incorporated into the new Communication Studies and Journalism Building (CJ), which opened in 2005, and also includes architectural features that maximize natural light and energy conservation.

These Loyola Campus revitalizations heralded the start of a green construction movement at Concordia.

The MB Building sports a “solar wall” developed in the laboratory of Andreas Athienitis, director of the university’s Centre for Zero Energy Building Studies (CZEB).

‘The goal is to touch the earth lightly’

In 2002, during a lecture at McGill University’s School of Architecture, the minds behind Concordia’s soon-to-be-built Engineering, Computer Science and Visual Arts Integrated Complex (EV) and the John Molson School of Business Building (MB) gave equal billing to aesthetics, functionality and sustainability.

“The goal is to touch the earth lightly,” said architect Mark Mitchell, before conceding that efficiency also does wonders for a university’s bottom line. “If you could construct the building you have for the same cost and have it operate at 50 per cent of the energy cost in the first year, who wouldn’t buy that?”

At its unveiling three years later, the EV Complex was 42 per cent more energy efficient than required by law. It incorporates economical heating and heat-recovery systems, recycled and recyclable materials, and stacked atria that draw sunlight deep into the building, but Gauthier says the most unique feature is its natural ventilation system.

“We have a shaft on the sides of the walls, all the way up, with dampers that open. When it’s nice outside, the chimney effect of the warm air sucks all the hot air up, throwing it out at the roof level, and we bring in 100 per cent fresh air at zero cost.”

Currently, Gauthier and a team of engineering students are working on a project to reinforce this effect by installing fans.

The MB Building, which opened for business in 2009, sports a “solar wall” developed in the laboratory of Andreas Athienitis, director of the university’s Centre for Zero Energy Building Studies (CZEB).

In 2012, the new PERFORM Centre (PC) on the Loyola Campus went one better, garnering gold status with features like its striking large windows and state-of-art modular chillers.

After the 2013 renovations to the Ed Meagher Arena next door, PERFORM began recuperating excess heat generated by the rink’s new carbon-dioxide refrigeration system.

“Instead of throwing the heat outside, we use it,” Gauthier says.

One year later, another new Loyola building — the Centre for Structural and Functional Genomics (GE) — also earned gold LEED certification. It uses 57 per cent less energy than the levels required by the National Energy Building Code of Canada.

After graduating from Concordia’s Department of Building, Civil and Environmental Engineering in 2009, Gauthier was hired on the strength of his performance during a Co-op work term with Gilbert, who retired last year.

As director of Engineering and Building Performance, and as a 28-year employee of the university, Gilbert participated in the evolution of sustainable construction. “I didn’t really mention the environment 10 years ago. Now I don’t hesitate to mention the benefits,” he said in a 2007 interview.

Gauthier, his successor, agrees that it’s no longer a hard argument to make. Energy-efficient buildings are good for the environment and the bottom line.

But when it comes right down to it, Gauthier believes that the key factor in any new construction or renovation project is always its utility.

Even the most efficient building isn’t a success unless it fulfills its intended purpose. “Perhaps we should be talking more about responsibility than sustainability,” he says with a laugh.

Now on to the next low-hanging fruit.

Find out more about the history of Concordia’s buildings on the Loyola Campus and the Sir George Williams Campus.