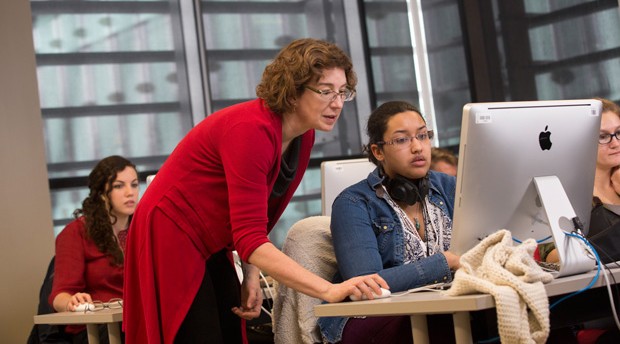 Associate professor of journalism Lisa Lynch is part of the female 41.4 per cent of Concordia’s faculty. | Photo by Concordia

On February 14, Concordia’s female faculty members are gathering for a half-day summit to discuss issues faced by women in teaching positions at the university.

At the world café-style event, capacity development will be on the agenda. “There are a number of specific concerns that we hope will be addressed,” says  Jorgen Hansen, vice-provost of Faculty Relations. “The number of women in senior teaching and administrative positions at the university is an obvious one.”

Statistics Canada reports that women held 33.4 per cent of teaching positions at Canadian universities during the 2006-07 school year. In four years, that number rose to 36.6 per cent.

Concordia’s numbers are slightly above average. At the beginning of the current academic year, 41.4 per cent of the university’s full-time and part-time faculty members were women.

“There has been an increase in the proportion of women faculty over time both at Concordia and elsewhere,” says Rosemary Reilly, provost fellow of Faculty Development. “But there are still differences across disciplines, and there are differences in terms of pay as well.”

Reilly is organizing the summit with a team of graduate students from the Department of Applied Human Sciences. “We want to bring women together from across the university, from all departments, at all levels, and gather them around tables to talk about particular issues — ways in which they feel really supported at Concordia, ideas that they might have and policies that they think would be important,” she says.

Reilly hopes to encourage more women to aspire to senior leadership roles and to remind attendees of the importance of recognizing the contributions of senior female faculty members through award nominations and membership in discipline-specific societies.

The summit also represents a rare opportunity for women from different faculties to meet up and share their experiences.

“Although, on the surface, the career trajectory of men and women may look similar, women have additional and invisible responsibilities,” she says. “More often than not, they're tasked with maintaining the home and childcare. That's why we're only holding the summit for half a day: there's only so much time that women can apportion to these kinds of things.”

And while Concordia does have good support structures in place for women — such as maternity leave and pay equity measures — Reilly thinks more needs to be done. “There are other, more hidden ways that women can help each other, and ways that the university can support them.”

The Concordia University Women Faculty Summit will take place on Friday, February 14 from 9 a.m. to 1 p.m. in Room H-763 in the Henry F. Hall Building. Lunch will be served.

Learn more about “Pioneers, leaders and visionaries” in this history of women at Concordia.