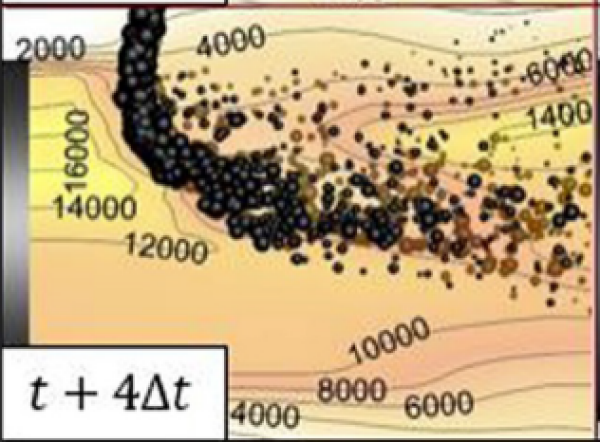 A three-dimensional unsteady magnetohydrodynamic model employing a two-way coupled Eulerian-Lagrangian method has been developed to simulate the suspension plasma spraying (SPS) process. In the current study, the developed model is employed to study the effect of droplets' shape and solid concentration (sub-micron yttria-stabilized zirconia (YSZ)) on the SPS process.

Assuming the droplets as the sphere is an idealization. While a droplet moves through the plasma gas field, circulation of the internal liquid, which depends on the ratio of the dynamic viscosity of suspension droplets, and plasma gas, starts. Moreover, the droplets are deformed as a result of non-uniform pressure forces acting on their surface. As the droplets' shape distorts, the drag coefficient changes. Therefore, using a drag coefficient model, incorporating the droplets' distortion is crucial to achieving an accurate spraying model.

In the current study, a dynamic drag law is applied to analyze the effect of droplets/particles' shape on the SPS process. As a result of the catastrophic breakup within the plasma core area, the breakup model, Kelvin-Helmholtz Rayleigh-Taylor (KHRT), is used for stimulating the droplets/particles' atomization. The inflight particles' conditions (temperature, speed, and size) are computed by tracking the sprayed droplets even after the solvent evaporates.

It was concluded that the percentage of the molten particles in the case of applying dynamic drag law (non-spherical particles) decreases significantly compared to the case of using spherical particles. The effect of suspension concentration is also studied. It was shown that using a higher solid concentration (20 compared to 10 wt.% YSZ) provides denser coating as a result of the larger molten landed particles with higher velocities.