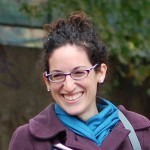 Stephanie Tara Schwartz is a SSHRC postdoctoral fellow at CEREV, Research Director at the Museum of Jewish Montreal (MJM) and co-editor with David S. Koffman of Canadian Jewish Studies/Études juives canadiennes. Her current project “Mapping Moroccan Jews in Montreal: A Social and Digital History” seeks to explore the influence of Moroccan Jewish artists and activists on the city. Through her work with MJM she curated the exhibits Sacré/Profane: Samy Elmaghribi (2015) and Parkley Clothes: 1937 (2014) at Nuit Blanche à Montréal, designed and taught the museums’ tour guide training and summer fellowship program, and helped lead and produce physical and digital walking tours on themes including Hazzanut and Jewish social service in Montreal. She is co-editor with May Telmissany of the book Counterpoints: The Legacy of Edward Said (2010). Her articles on Jewish diaspora, the literature and film of Arab Jews and Jews and multiculturalism in Canada have been published Borderlands e-journal, Canadian Jewish Studies, Comparative Studies of South Asia, Africa, and the Middle East and Critical Inquiries: A Reader in Studies of Canada. She is also Research Associate at the Concordia Institute for Canadian Jewish Studies.