Ted Hewitt and Rémi Quirion: How will university-based research be transformed in the next decade? 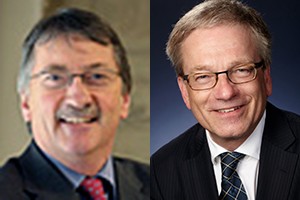 In March 2015, Ted Hewitt was appointed president of the Social Sciences and Humanities Research Council of Canada (SSHRC). Prior to his appointment, he was the council’s executive vice-president and chief operating officer.

SSHRC is a federal agency that promotes and supports post-secondary-based research and training in the humanities and social sciences. Through its programs, SSHRC works to develop talented leaders for all sectors of society; to help generate insights about people, ideas and behaviour; and to establish connections within and beyond academia that will build a better future for Canada and the world.

From 2004 to 2011, Hewitt was vice-president, research and international relations at the University of Western Ontario in London where he had been a professor of sociology since 1989. He was also a public policy scholar at the Brazil Institute of the Woodrow Wilson International Center for Scholars in Washington, D.C.

A leading authority on Brazil, Hewitt has published in monographs, edited works and a range of academic journals. In 2002, Brazil’s Ministry of Foreign Relations named him a commander of the Order of Rio Branco.

His recent research has focused on national and international innovation systems with emphasis on the roles of universities, industry and government in promoting economic prosperity in the 21st century. He is Canadian co-chair of the Canada-Brazil Joint Committee for Cooperation on Science, Technology and Innovation, and a member of the board of the Brazil-Canada Chamber of Commerce.

Hewitt holds a PhD in sociology from McMaster University.

On September 1, 2011, Rémi Quirion, OC, PhD, CQ, FRSC, assumed the role of Quebec’s first chief scientist. As part of his responsibilities, he chairs the boards of directors of the three Fonds de recherche du Québec and advises the Quebec Minister of Higher Education, Research and Science on research and scientific development issues.

Until his appointment as chief scientist, Quirion was the vice-dean for Science and Strategic Initiatives in the Faculty of Medicine at McGill University and senior university advisor on health sciences research. He was the scientific director of the Douglas Mental Health University Institute Research Centre, a full professor in the Department of Psychiatry at McGill University and the executive director of the International Collaborative Research Strategy for Alzheimer’s Disease of the Canadian Institutes of Health Research. He was the first scientific director of the Institute of Neurosciences, Mental Health and Addiction (INMHA), one of Canada’s 13 health research institutes.

Quirion's work helped to elucidate the roles of the cholinergic system in Alzheimer’s disease, of neuropeptide Y in depression and memory and of the calcitonin gene-related peptide (CGRP) in pain and opiate tolerance. He earned his PhD in pharmacology from Université de Sherbrooke in 1980 and carried out his postdoctoral training at the National Institute of Mental Health in the United States in 1983. He has more than 650 publications in prominent scientific journals and is one of the most extensively cited neuroscientists in the world.

He has received several awards and honours, including the Ordre national du Québec (Chevalier du Québec, CQ) in 2003, the Prix Wilder-Penfield (Prix du Québec) in 2004 and the Order of Canada (OC) in 2007. Quirion is also a member of the Royal Society of Canada.